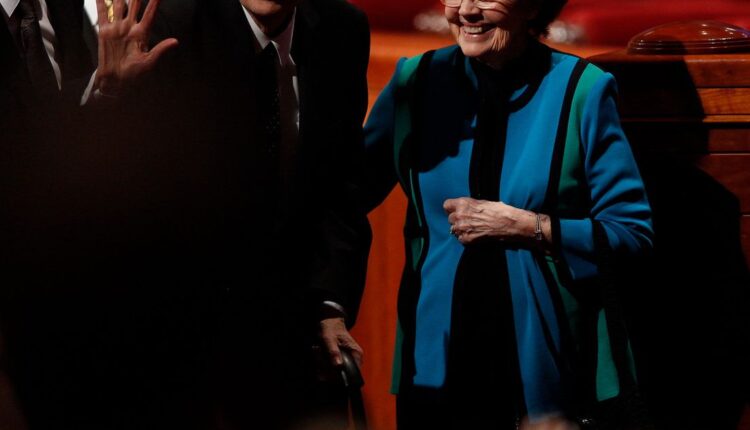 Widow of LDS apostle this

Aug. 6, 1932—Jan. 15, 2023: She cared for her globe-trotting family, pursued learning throughout her life and tended to her husband as his health failed.

(The Church of Jesus Christ of Latter-day Saints) Apostle Robert D. Hales leaves with his wife, Mary, from the Sunday afternoon session of General Conference in April 2015. He died in 2017; she died Sunday, Jan. 15, 2023.

After relocating her family of four more than a dozen times early in her married life, Mary Crandall Hales, widow of Latter-day Saint apostle Robert D. Hales, had moving down to a science.

“Mom had a blueprint for winding up school, saying goodbyes and organizing learning experiences focused on our next destination,” recalled Stephen. “She helped us collect and pack the necessities, and all else was sent to family members or donated to those in need to teach us a willingness to share.”

And the moves would only multiply for Mary Hales — who died Sunday at age 90 in her North Salt Lake home of causes incident to age — as her husband jetted from service in the Air Force as a fighter pilot to a blossoming business career and, eventually , a full-time and, ultimately, lifetime position in The Church of Jesus Christ of Latter-day Saints.

When her family had to go to Germany, her husband once recalled, according to a news release, “Mary got the boys into school, learned to find her way around the busy autobahn and eventually learned to speak German. This was typical. She always made it work.”

And Hales embraced work, education, family responsibilities and the Latter-day Saint gospel. Born Aug. 6, 1932, in Salt Lake City, she moved with her family to Los Angeles before returning to Utah to attend Brigham Young University in Provo.

She met her future husband when the Crandall family lived in New York and married him in 1953 in the Salt Lake Temple. The couple had two sons, Stephen and David.

As the family moved around the globe, her children “learned by her example that we were guests in new lands,” Stephen said in the release. “It was an opportunity to find new friends and new meanings and to think in new ways and glean new viewpoints.”

Hales also worked to broaden her own views. With a lifelong love of learning, she studied history, literature and psychology, graduating in 1982 from BYU in home and family development.

Robert Hales, who died in 2017, paid tribute to his wife and her devotion to his career and church service. “Once, when I received a promotion, my boss told me that I wouldn’t be where I was without my wife,” the release noted. “He said, ‘Mary is your greatest asset, and don’t you forget it.’ And I never have.”

She became an even more invaluable asset when the apostle’s health began to fail, caring for him “in every conceivable” way, Stephen said. “Her efforts enabled Dad to remain focused on his role as special witness of the living Savior” until his life ended at age 85.

“Mom was so strong,” Stephen said. “She demonstrated unconditional Christlike love and always encouraged us to be peacemakers, seek common ground and show empathy.”