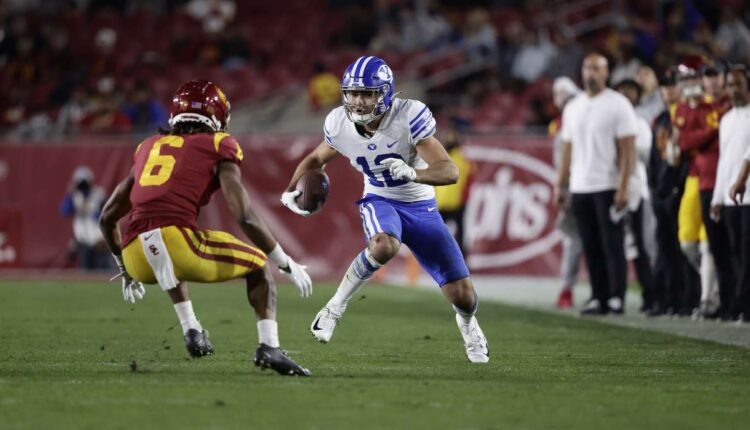 PROVO — It’s still a year and a half away, but BYU’s first season of Big 12 football play is practically complete.

USC officially canceled its home game with BYU in 2023 Thursday, replacing the November contest with a Week 0 date against San Jose State. That leaves the Cougars with four nonconference games for their first season of Big 12 play.

The Cougars and Trojans were set to play Nov. 25, 2023. The cancellation leaves BYU with two nonconference games against SEC opponents in September, a game with FCS foe Southern Utah in November and an unscheduled date with Wagon Wheel rival Utah State for the same year.

The final piece of the puzzle will come in October, when the Big 12 announces the conference schedule for what is currently a 14-team league that includes Texas and Oklahoma, as well as newcomers BYU, Cincinnati, Houston and UCF. There’s still some debate about whether to play eight or nine conference games, though Big 12 commissioner Bob Bowlsby believes nine Big 12 games may be the most likely — at least until UT and OU depart for the Southeastern Conference by 2025.

“In football, I’m an advocate for nine games because I think our conference quality is good enough that it’s valuable for us,” Bowlsby told BYUtv when he made a campus visit in February. “We’re going to be at 14 for a couple of years, so playing a full round-robin is not in the cards.

“I think you want to minimize the number of no plays you have, if you can. One thing that makes great leagues is great rivalries, and we’re going to do everything we can to make that happen.”

Bowlsby, who recently announced he will retire after 40 years in college athletics, added that the league will likely “take a different look at” playing eight or nine games upon the departure of Texas and Oklahoma. The Big 12 is likely to play with 14 teams separated in divisions in football, but a full round-robin slate in men’s and women’s basketball, he said.

If the league sticks with nine conference games, that would likely mean BYU could push its game with the Aggies to a future date — or cancel the game entirely, possibly for a fee. That seems the most likely cancellation, with BYU also scheduled to host Tennessee on Sept. 2 and visit Arkansas on Sept. 16, 2023 — the return game of a home-and-home series that begins Oct. 15 in Provo.

If the Big 12 decides on playing eight conference games, then BYU and Utah State can find a mutually beneficial date to play the game in Logan, which would give the Cougars two home games and two road games among their nonconference schedule.

But nearly finishing the 2023 schedule marks the end of a series that began back in November, when athletic director Tom Holmoe began moving the pieces by pushing his 2023 game with South Florida back to at least 2026.

“BYU fans are going to see many of our football games scheduled for the future move around over the next few years. That’s just part of the new reality for us, moving into the Big 12, with a bevy of conference games that we are excited to play,” Holmoe told KSL.com at the time. “We are confident that we’ll be able to restructure schedules in a way that will be of greatest benefit for our football program, while coming up with solutions to existing contracts.”

Former BYU punter Andrew Mikkelsen delivers an MMA knockout, in a tradition that is…