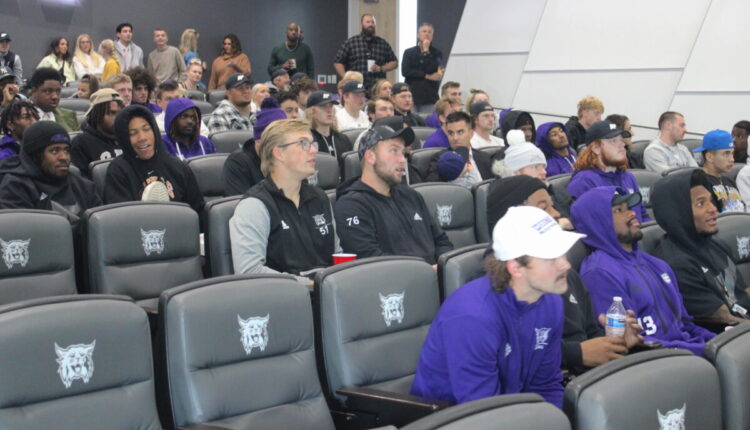 The announcement of the final seeded teams for the FCS playoffs — and their associated first-round byes — came and went Sunday morning, and Weber State football was not among them.

WSU players and coaches watched the televised proceedings from the team auditorium inside the Youngberg Football Center at Stewart Stadium, and seemed to take the news with a mix of surprise and resolve.

Instead, the Wildcats (9-2) will host a first-round game against North Dakota (7-4). Those teams will kick off at 2 pm Saturday, Nov. 26, at Stewart Stadium, in a game that will be streamed on ESPN+.

And though WSU would be universally regarded as the No. 9 team in the field, or the best team without a seed, regionalization means the winner of the first-round game travels to Bozeman, Montana, to take on No. 4 seeds Montana State.

“The ultimate goal is the playoffs and we’ve got a chance to play for a championship. That’s where our focus and attention will go,” WSU head coach Jay Hill said.

South Dakota State was given the No. 1 seed. No. 2 Sacramento State, undefeated with an FBS win, joined MSU in the top half of the seeding. North Dakota State was placed at No. 3. Behind No. 4 MSU came no. 5 William & Mary, no. 6 Samford, no. 7 Incarnate Word and No. 8 Holy Cross.

“There were some really, really good teams. A lot of those guys who got the seeds were conference champions and most of them had 10 wins. So we get that,” Hill said. “The reality is get in, and now we’re all in the same boat. Win and advance, and you’re going to have to beat really good teams to advance.”

But it seemed to be a perfect storm this season of factors that would keep Weber State, 9-2 with the best FBS win in the subdivision, from getting a national seed. Though against less impressive teams and by smaller margins, William & Mary (10-1), Incarnate Word (10-1) and Holy Cross (11-0) also carry FBS wins.

So although Weber State was 9-2 in the toughest conference in the country, its record did carry a non-division I win and everyone else had at least 10 wins. That was the break.

But after missing the playoffs entirely in 2021, the Wildcats are back in the field for the sixth time in seven seasons. It’s an unprecedented run of success in Ogden.

As expected, Idaho (7-2 against FCS teams) also made the field and will travel to play Southeastern Louisiana. An on-the-bubble Montana (7-4) team did make the playoffs and will host a home game to boot, welcoming Southeast Missouri State to Missoula.

AND is the least penalized team in the country.

“I think coach (Bubba) Schweigert does a phenomenal job with his teams. They’re always disciplined, they’re always tougher than nails,” Hill said. “They’re good in all three phases of the game.”

Though Weber State is disappointed to not get a bye and a top seed, the Wildcats do have a chance to repeat some history.

The goal is to play the best football in November. Hill says he’s seen some signs his team is doing so — such as being No. 1 in the country in kick returns and punt returns.

“I know we’re battle-tested, for sure. We’ve seen some great leadership step forward in the last couple weeks,” he said. “That’s been huge to watch those guys continue to develop and rally the team.”

How serious is it? What happened to Utah Jazz guard?