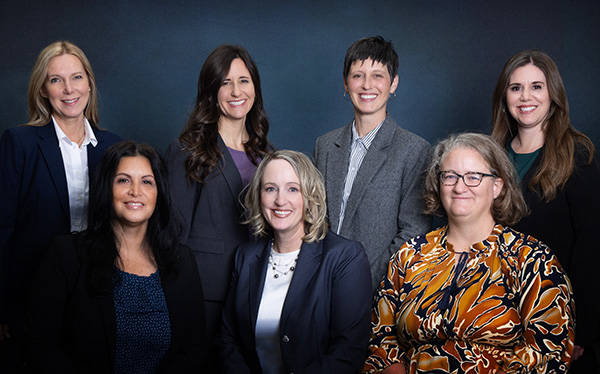 The all-female Provo City School District Board of Education, as of Jan. 1, 2023.

Katrice Mackay is Chairwoman of the Provo City Council.

Lisa Jensen is chair of the Provo Planning Commission.

For the first time in the history of Provo, the top leadership positions in all major governmental bodies — from the Utah County Commission to the Provo City School District Board of Education — are held by women.

Commissioner Amelia Powers Gardner is the chairwoman of the Utah County Commission; Michelle Kaufusi is the first female mayor of Provo; Katrice Mackay and Rachel Whipple are the chair and vice chair of the City Council; Shannon Ellsworth chairs the Redevelopment Agency; Lisa Jensen serves as chair of the Planning Commission; and the entirety of the school board are women.

What is the explanation for the boom in female leadership? According to Powers Gardner, it has to do with how they think.

“Women have a propensity to think generationally. We’re constantly thinking about our children and how decisions might impact them,” Powers Gardner said. “Utah County is in an incredible growth phase and it’s critical that we weigh every decision against the next 20-30 years. If we don’t do this, we are going to hit a crisis. Women are very good at multitasking and we also think long term with an eye on the future. This skill set serves women leaders very well.”

It’s important to point out, Powers Gardner noted, that diversity of thought is an important component of public policy.

“Men and women think differently and prioritize policy differently. This is why it’s so important to have both at the table when making important decisions,” she said.

Wayne Parker, Provo’s chief administrative officer, has worked with women most of his career. He noted that, “For the first time in the city’s history with our current form of government, the Provo mayor, council chair and council vice chair are all women. While Provo has had a long line of remarkable women in key leadership positions, including two of our current department directors, this is a milestone moment.”

“Having spent 40-plus years in local government, I am thrilled to see more women in the highest levels of local government. In my experience, greater gender balance in leadership brings so many positive benefits,” he added. “Women leaders tend to be better communicators, better mentors to younger employees in the workforce, and to be more tuned in to the needs of everyone in a community.”

Parker expressed that working with women throughout his career has made him a better public servant.

“I’m honored to be a part of this historic Provo moment. … More importantly, these deserving women — and all women who bravely throw their hat into the political ring — serve as important examples and mentors encourage future female leaders to join in decision-making conversations,” Kaufusi said. “It’s been my honor to see firsthand the unique skills and talents each bring to their Provo City service. Each embodies the high level of dedication and ability that women leaders continually show they bring to the table when they’re given the opportunity to have a seat.”

Orem City Council member Debby Lauret shared her view on electing women. “Women have a unique perspective and we help represent the population. I love the idea of ​​having our councils and boards filled with at least 30% women. Jessica Egbert, Mapleton city councilwoman, says, ‘Women offer diverse voices for creating good, lasting policy and innovation.’”

When it comes to political development for women, Susan Madsen, director of the Utah Women & Leadership Project housed at Utah State University, is cautiously jubilant about the female participation in Utah County.

“It is encouraging and heart-warming to see such progress in terms of women and politics in Utah County at the local level,” Madsen said. “Research continues to confirm that when men and women serve together in communities, counties and states, all residents are better served and are more likely to thrive.”

As Madsen sees it, American democracy is grounded in the idea of ​​representation, meaning that political officials should share the demographic characteristics of the communities they serve.

“Men and women are often concerned and are passionate about different things. The more that our political officials represent the community at large, the better the decision-making will be. I’m encouraged by the progress we are making in Utah County in this area,” she said.

When asked what it means to have an all-female board of education, board member Teri McCabe said, “It means we want to be more collaborative throughout the whole school district to give the students the best educational experience.”

“Also, for the last two years, I have been asking questions about the finances of the school district to make sure we are using the taxpayers’ money correctly. In our first meeting as an all-female board, Lisa Boyce asked some follow-up questions about the financial reports, which snowballed into more board members asking questions. Having more women on the board will help with getting into the details before we have to make difficult decisions and being more transparent with the public,” McCabe added.

As the new chairwoman of the Provo Council, MacKay noted she had been mentored by many of the current elected women, including Powers Gardner, Kaufusi and Lauret.

MacKay’s youngest child was 8 when she decided to run for the council. She had been an at-home mom for her youngest two children and knew if she won it would be a big adjustment for her family.

“One of the reasons I decided to run was that it bothered me that there wasn’t a mother’s voice on the council at the time,” MacKay said. “I have been a single mom, a married mom, a working mom and a stay-at-home mom. Provo is growing and will continue to grow. Despite the growth, it is important to me that Provo retains the same values ​​and qualities which it has always had.”