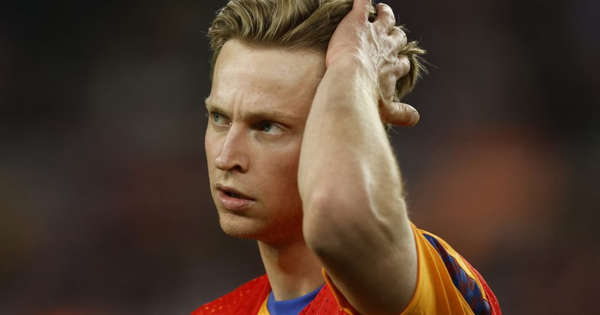 ‘Would be a sensational buy’

ESPN reporter Mark Ogden believes Frenkie de Jong would be a fantastic signing for Manchester United this summer, but they may struggle to convince him to join given their lack of Champions League football.

Manchester United fans, do you remember how many points you picked up in seasons gone by? Let’s find out, starting with 2020/21

De Jong’s Barcelona are in financial trouble and still need to move several players this summer. De Jong has been linked with a move to the Premier League outfit, and the arrival of Erik ten Hag as the Red Devils’ new manager has only added fuel to the speculation of a switch given their time at Ajax.

Speaking on The United Stand, Ogden believes De Jong would be a brilliant signing, but it may be hard to capture his services.

He said: “I think if they could get De Jong, it would be a sensational buy. They could maybe capitalize on Barcelona’s problems right now financially.

“But they have to appeal to Frenkie de Jong, and I think United are a big club, one of the most famous clubs in the world, but they’re not a team that would attract a Champions League player right now.”

£63m-valued De Jong first burst onto the scene at Ajax as they reached the Champions League semi-finals in 2019, but Barcelona have struggled since his switch to Camp Nou, and their poor financial situation is now common knowledge. As such, while the Netherlands international has featured heavily – appearing in all but seven La Liga games in the last two seasons – he has not hit the heights many may have expected.

© Provided by This is Futbol
yes

© Provided by This is Futbol
No

It was under Ten Hag that De Jong made his first steps in professional football, and a reunion between the two at Old Trafford could be perfect. However, without Champions League nights, capturing such players could prove to be difficult, and the negotiating team will have to sell the new project.