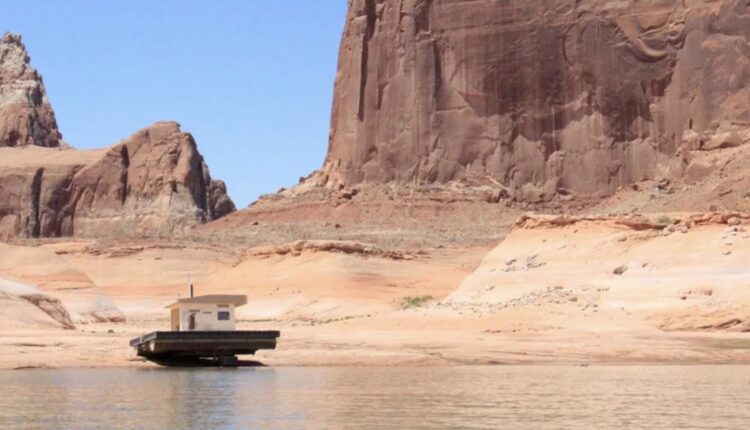 Water levels on the Colorado River are at their lowest point in 1,200 years and the water in the Flaming Gorge Reservoir in Southwest Wyoming is being used to help replenish the parched river and Lake Powell downstream.

“It just keeps getting worse,” Chris Brown, legal counsel for the Wyoming Attorney General’s Office told the Legislature’s Water Committee at its May 11 meeting. “We’ve been incredibly active trying to prop up critical elevations at Lake Powell so we don’t lose hydropower … so we don’t risk the infrastructure at Lake Powell.”

Earlier this month, the US Bureau of Reclamation announced it is releasing an extra 500,000 acre-feet of water from Flaming Gorge to help maintain hydroelectric operations at Lake Powell.

A separate, seven-state agreement was also arranged to reduce outflows from Lake Powell to 7 million acre-feet, at an “unprecedented” level, Brown said.

“A lot of work is taking place to rescue Lake Powell,” Brown said.

Releases from Flaming Gorge were boosted to 1,800 cubic feet per second — an increase of 850 cfs — on May 5 and will continue until further notice.

Lake Powell’s water content is currently at 24% of capacity and 35 feet below where it sat one year ago.

The lake’s decline is triggering a potential energy crisis for millions of people who rely on its Glen Canyon Dam as a power source, and who may see rising energy costs and water shortages if drought conditions persist.

Wyoming itself is in a period of extremely dry conditions. According to the National Integrated Drought Information System, 100% of Wyoming is abnormally dry right now and 51.3% of the state is facing a severe drought.

Although Flaming Gorge is doing much better than Lake Powell, the amount of water it holds is also well below capacity. As of May 5, the water level in Flaming Gorge Reservoir sat at 6,018.85 feet, approximately 78% of its overall capacity. Unregulated water flows into the reservoir in April were 52% of average.

The US Bureau of Reclamation is predicting that by 2026 there may be a federal drawback of water on the Colorado. Hicks said the working group has been exploring alternate solutions to reduce water consumption or institute a demand management program to avoid this scenario.

Brandon Gebhart, Wyoming state engineer, said there are other options being examined involving two-year limited use agreements on water from the river system.

Brown said Wyoming’s obligation to help the Southwest meet its water demands stems back to the 100-year old Colorado River Compact, established in 1922.

The agreement divides states along the Colorado River System into upper and lower basins. Wyoming is a member of the upper basin.

Under the agreement, each basin is allocated 7.5 million acre-feet of water annually out from the Colorado River.

An acre-foot of water is the amount of water needed to cover 1 acre of land with 1 foot of water, about 326,000 gallons.

A later agreement developed in 1948 established water allotments among the upper basin states based on the percentage of water available.

Brown said under a 1944 agreement with Mexico, in the event of a deficiency to that country’s portion of Colorado River water, it is the upper basin’s responsibility to provide it with 750,000 acre-feet of water.

This decision, he said, would be enacted by the Upper Colorado River Commission, an interstate agency made up by representatives from Wyoming, Colorado, New Mexico and an agent from the federal government. Brown said a reduction in allowed water use might even be put in place ahead of a shortage so the 1922 agreement is not violated.

“We might have to curtail those uses to make sure that we comply,” he said.

Hicks said the biggest question moving forward is whether Wyoming could develop a system to store its water forward for years, if not decades, into the future. Colorado is a state that has already developed a number of water banking programs to do just that.

“Do we have the regulatory framework to go ahead and establish a water bank?” Hicks said.

Brown said a pilot conservation program run from 2015 to 2018 showed that some Wyoming residents are willing to give up water in exchange for payment. Hicks said a system similar to this could theoretically be deployed in the future.

“There very well could be adequate statutory and regulatory mechanisms to address any of these hypothetical programs that are being discussed,” Hicks said. “This issue is out there. It’s going to loom even greater in the coming years.”