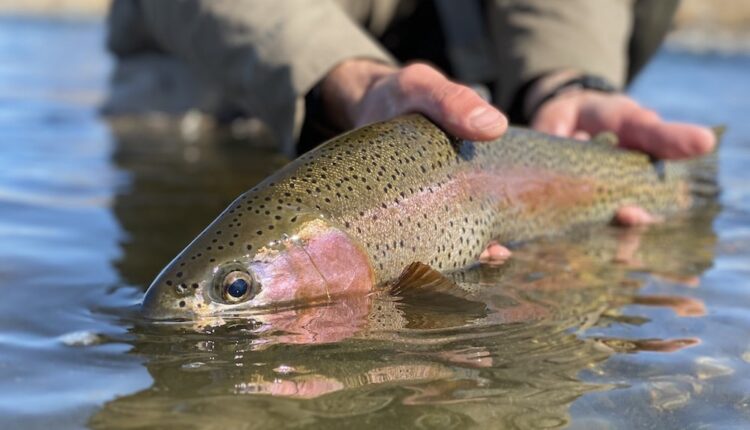 Wyoming’s fish are in hot water; Anglers can help

In the past 60 days, temperatures in parts of northern and southwestern Wyoming have risen up to 8 degrees above normal. And these aren’t just highs.

For example, if a city is used to night lows in the mid-50s, it experiences lows that never go below 60 and highs well into the 90s, said Chris Jones, a meteorologist with the National Weather Service in Riverton.

“We don’t see the relief we’re used to at night, and it often becomes more apparent to people,” said Jones. “For example, if it doesn’t go down to 66 and it’s 71, the next day it gives a boost and dries up the floor more, and then it makes the temperature a little higher every day.”

This summer Record or record temperatures, combined with poor winter snow cover and exceptionally low river runoff, are prompting fisheries and land administrators across the state to issue serious warnings to anglers. Fish die, and fishing in the heat of the day will make it worse, they say.

Some of these warnings come in the form of recommendations, and others involve changes to fishing regulations. In Yellowstone National Park, for example, fishing is prohibited after 2 p.m. The park also has a warning for those who don’t want to abide by it.

“Your collaboration will protect the park’s fishing and may prevent the need to ban fishing in some rivers and streams at any time of the day if conditions deteriorate,” the park said in a press release.

Warm river temperatures are not uncommon for Wyoming in late summer. Fishery biologists often advise anglers to be more careful catch-and-release fishing in mid or late August, or to fish only in the early hours of the morning.

But this summer the conditions were tougher than usual. An angler searches for fish under a rock wall in a basin in the Clarks Fork River. (Daniel Kenah / WyoFile)

Not only are the temperatures well above average in many places, but also the rainfall was scarce, especially in the north and west of the state, said Jones.

In early July, places like Rock Springs saw less than a fifth of the normal rainfall since April 1st. The soil is so dry that even when it rains recently, very little was absorbed into the soil, Jones said. In Rock Springs, for example, when over an inch of rain fell at the end of July, the dangerous combination of downpours and sun-burned soil caused urban flooding.

“The soil is not receptive,” said Jones. “It’s like concrete, you get a lot more drainage.”

The situation could have serious effects on a number of wildlife species, including deer and Prong bracket if the drought persists. Shrubs and plants do not grow, which makes it difficult for some animals to get enough food in winter.

But it is fish that are of most concern to biologists at the moment.

Trout are cold water animals that require high levels of oxygen. The warmer the water, the lower the oxygen content.

Longer water temperatures over 75 degrees Fahrenheit are dangerous to trout, and anything over 80 degrees is fatal, said Hilda Sexauer, Wyoming Game and Fish Department’s Pinedale Fishing Supervisory Board.

Add the stress of being caught, controlled and released and a lot of fish stand no chance, she said.

Because of this, Yellowstone has restricted fishing, and Game and Fish has sent out several email messages encouraging anglers to think about trout before going into the water.

And based on the forecast, conditions are unlikely to improve.

Temperatures will likely be hotter than normal, with below-average rainfall well into October, Jones said.

“Can you get a week out of the ordinary? Absolutely, ”said Jones, but added that the overall outlook is hot and dry.

For many anglers, for the rest of the summer, the question arises: should they fish?

Game and Fish does not prohibit fishing, even in the afternoon, but it does recommend anglers avoid catching and releasing fish after 2 p.m. in hotter, lower-lying parts of the state. The department’s biologists also ask anglers to land fish as quickly as possible and keep them in the water. Purified rainbow and brown trout, ready to pan. “If a fish is exhausted and unable to stand upright, and regulations allow it, consider having it for dinner as the fish has a slim chance of survival,” says the Game and Fish recommendations. (Matthew Copeland / WyoFile)

Other recommendations include avoiding squeezing fish or putting your fingers under their gills, and using barbed hooks for quicker release and artificial flies or baits if you want to release the fish.

Biologists also encourage anglers to assess the health of a fish before releasing it.

“If a fish is exhausted and unable to stand upright, and regulations allow it, consider having it for dinner as the fish has a slim chance of survival,” says the Game and Fish recommendations.

Water is hottest in the afternoon and evening. Fishing at sunset is far more dangerous for trout than at sunrise, even if the air temperature feels cooler.

Anyone fishing in the summer heat should also bring a thermometer to measure the water temperature, said Anna Le, a water biologist and educator based in Yellowstone.

There is not a single magical “safe” temperature for trout fishing. Species, flow speed, river structure, water quality and countless other factors contribute to survivability. However, many experts and anglers advise ending the day when the water temperatures reach 68 degrees.

Le appeared on the banks of rivers in Yellowstone and turned around because the water temperature was simply too high to ethically catch and release fish, she said.

“For me, the worry is about stressing them out, especially when you enter their habitat or attach them when the oxygen levels in the water are low,” she said. She’s also worried about introducing bacteria that can thrive better in warmer temperatures.

Anglers can also fish for warmer waters such as sunfish, perch, catfish or carp.

In Casper, Game and Fish announced fish deaths on Yesness Pond. The heat can stress and kill trout in small streams and low-altitude lakes in the area, including Deer, Boxelder, and LaPrele streams, biologist Matt Hahn said in another heat-related news release.

Green River angler and Trout Unlimited project manager Nick Walrath has switched to carp in places like the Flaming Gorge Reservoir or even the Green River itself because the water is too hot to catch and release trout, he said.

It is also safe to sail in colder waters in high mountain streams and lakes. Some Wyoming mountain ranges, including the Snowy Range in southeast Wyoming, still have snowmelt and nourishing lakes that keep temperatures cold enough for responsible catch and release.

This winter could bring relief, said Jones. It’s a La Niña year that usually brings above average rainfall to the northwestern part of the state in winter and an equal chance of above, average, or below for the rest of the state. Given the water temperatures in many lower rivers and small lakes in the 1970s, fishery biologists encourage people to find other fishing destinations, such as still cold high mountain lakes. (Christine Peterson)

Hard Lessons From a City That Tried to Privatize Public Health