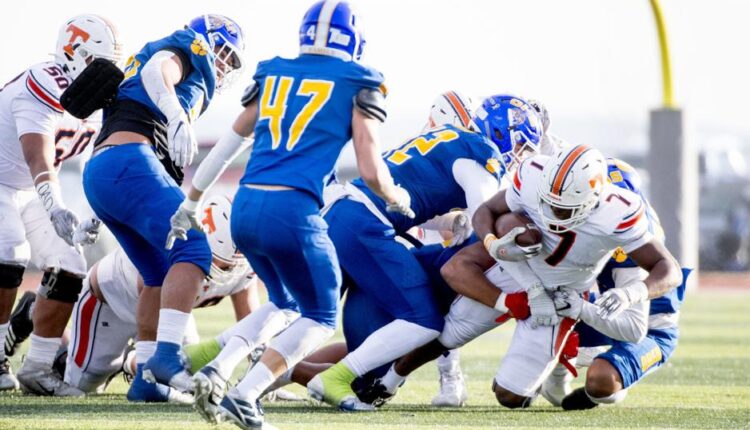 With the 2021 football state season kicking off, former Provo coach Brian Preece released his preseason power poll, which ranks all the teams in the state of Utah.

1. Corner Canyon (6A) Chargers No. 1 until proven otherwise

2. American Fork (6A) Cavemen offense will be tough to stop

4. Skyridge (6A) Falcons eyeing the 6A title

5. East (5A) Moving down to 5A and could challenge Orem supremacy

6. Bingham (6A) Miners look to contend again in 6A gridiron wars

8. Weber (6A) Warriors becoming a consistent winner in 6A

13. Fremont (6A) Silverwolves want to prove themselves

14. Pine View (4A) Panthers growing tired of the silver trophy

15. Herriman (6A) Mustangs hope physicality will help them win games

16. Ridgeline (4A) Riverhawks might be the team to beat in 4A

18. Springville (5A) With lots of returning starters, Red Devils will be tough

21. Riverton (6A) Silverwolves hoping to make next level

24. Roy (6A) Royals a solid program with legendary coach

26. Salem Hills (5A) Skyhawks have made 5A semifinals two straight years

27. Lehi (6A) Young pioneers might surprise a few teams

31. Bountiful (5A) Braves are a solid team program year in and year out

32. Westlake (6A) Thunder hope to move up a peg in always-tough Region 4

34. Stansbury (5A) Stallions hope to make successful jump to 5A

36. Highland (5A) Rams hope to return to dominant ways

37. Park City (4A) Miners moving to 5A and hope to continue their success

40. West Jordan (6A) Jaguars should wins some games this season

43. Beaver (2A) Returning 2A champs will be tough to beat

45. Provo (5A) Replacing two top assistants will be challenging

47. Box Elder (5A) Bees tough on defense, but need to score more points

50. Mountain Ridge (6A) Moving up to 6A will be challenging

58. Grantsville (3A) Cowboys are tough on the gridiron

59. Mountain Crest (4A) Mustangs hoping to return to greatness

62. Summit Academy (2A) Charter school looks to dominate in 2A

63. Layton (6A) Wins have not come easy for Lancer program

64. Crimson Cliffs (4A) Second-year school hoping to jump up a level

66. Logan (4A) Grizzlies hope to return to winning form

68. Manti (3A) Templar program set up on traditionally solid foundation

69. Granger (6A) Athleticism not an issue in Lancer program

72. Clearfield (6A) Falcons hope to win some games in Region 1

73. Hillcrest (5A) Huskies hoping to win games in Region 7

75. Taylorsville (6A) Warriors hoping to make some noise in Region 2

79. Duchesne (1A) Eagles are favorite to win 1A state title

80. Canyon View (3A) Moving down to 3A could help Falcon fortunes

82. South Summit (2A) Program returns to 2A and hopes this brings more wins

83. Cyprus (6A) Pirates tired of walking the plank instead of opponents

84. Timpanogos (5A) Returning to 5A with new head coach Tyler Anderson

93. Ogden (3A) Moving to 3A could help Tiger fortunes greatly

94. Emery (2A) Moving down to 2A could be good for Spartan program

95. Cottonwood (Ind.) Independence did bring some wins for Colt program

97. Ben Lomond (3A) Like rival Ogden, Scots hope moving down to 3A helps

98. North Summit (1A) Moving down to 1A could help Brave program contend

99. Providence Hall (2A) Moving from independent status to 2A program

100. Gunnison (1A) Bulldogs hope to be a contender in 1A football

101. Carbon (3A) Dino program has been struggling in recent years

103. Rich (1A) Traditional 1A power has struggled in recent years

106. Judge Memorial (2A) Once proud program hopes to reestablish itself in 2A

Notes: Corner Canyon sits atop of the Preece Power Poll until knocked off in competition. One simple rule I live by. I’m not sure the Chargers will again repeat as 6A champions this season, but they will start at the No. 1 position here. And if Corner Canyon doesn’t take home the 6A title, expect a team from Utah County to do it.

The 2020 season was indeed an interesting one with canceled games or contests without fans. But in spite of COVID-19, the season was completed. Still, a few teams like Fremont and Kearns were eliminated by the virus versus an opponent on the gridiron. But the big news for 2021 is the changing landscape that was brought upon by realignment.

But before we dive into that, there is some other good news. After sitting out the 2020 season because of COVID-19 concerns, Navajo nation schools Monument Valley and Whitehorse will resume competition in football, though they compete independently (and have so for several years now) against other schools in the four-corners area. Cottonwood will also compete as an independent. Two Utah Valley schools which competed independently last season (Payson and Timpanogos) will resume competition in 5A and in Region 7.

Speaking of 5A, there will now be five regions and Utah Valley schools will be dispersed in three different leagues. Cedar Valley, Mountain View, Payson and Timpanogos will compete in the much “softer” Region 7, a league that stretches from eastern Utah with Uintah to Stansbury to the north to even a team in central Salt Lake County (Hillcrest). So Payson will bypass playing games against other Nebo School District schools, which is puzzling for many. Cedar Valley and Mountain View are making the jump into 5A football, while Payson and Timpanogos will leave independence to compete for region and state titles.

Lehi, Orem and Timpview will be put into the new Region 8 that features just five schools. The other two teams in this league are Alta and Jordan. Considered the best league in 5A football, at least four of the schools, save Jordan which suffered through a winless 2020, have realistic aspirations to win a state title. Orem has won four state titles in a row and will go for its third straight 5A title. Timpview has played Orem the past two years in the championship game, while Alta and Lehi have made deep playoff runs in recent years including Lehi taking state in 5A in 2017.

Provo and Wasatch will compete in Region 9 with a slew of Nebo District schools including Maple Mountain, Salem Hills, Spanish Fork and league-favorite Springville. The rivalry game between Provo and Timpview last season was a victim of COVID-19 cancellation, but for the first time in the history of Timpview’s existence, the two teams in 2021 are not scheduled to meet.

The 4A classification was generally gutted and it will just have two classifications, a league of northern schools mostly from Cache Valley plus Bear River and St. George area schools plus Cedar City. Canyon View, located in Cedar City, will compete in 3A this season. This will leave 4A with just 13 schools, while 5A has 32 schools. This has many shaking their heads. And beyond that, 5A has one region with eight schools (Region 7) while another (Region 8) has just five programs.

ALA will compete in the 2A North Region with the likes of Providence Hall, another team that played independently but will give a classification a try. This league has four private or charter schools in it and only two traditional public schools.

Another titanic change in the landscape of Utah prep football was the creation, or re-creation, of 1A football. Recent small-school powerhouses like Duchesne and Milford will certainly be happy that Beaver is in 2A. When the dust settled, 4A will have 13 football schools, 3A and 2A will have 12 gridiron programs, while 1A will have 10 teams battle for a trophy.

6A hasn’t changed all that much with four regions and 26 competing programs.

Of course, Region 4 will remain the “SEC” of Utah football with Corner Canyon duking it out with Utah County powerhouses American Fork, Lone Peak, Pleasant Grove and Skyridge, while Westlake boasts a solid program. The Thunder usually take a few losses on their record due to its ferocious schedule but are certainly happy with the newer all-comers to the state tournament format. Despite finishing in last place in its league the past two seasons, the Thunder have been able to prove its wares by winning its first round game. Unfortunately, as either the No. 16 or No. 17 seed, Westlake has bumped into juggernaut Corner Canyon. The Thunder faithful hope that won’t be the case again in 2021.

Mountain Ridge is moving up to 6A this year but East, who has played 6A football the past few seasons but 5A in other sports, has moved down to 5A in football as well and will compete in Region 6. The Leopards will definitely pose a challenge to Orem and Timpview for 5A supremacy. Orem and East will actually square off in week one in what could be a state title preview game.

Maple Mountain’s Brad Burtenshaw, the only head football coach in Golden Eagle history, will be the senior coach in the valley. Former Provo defensive coordinator Abe Poduska will take the helm at Mountain View, while former Bruin head coach Tyler Anderson will try to make Timpanogos relevant in the 5A gridiron wars. Anderson has been the head coach at all three Orem city programs.

At Payson, head wrestling coach Jeb Clark, who took on the football head position last year, will step down this year in favor of Mark Murdoch. The new Payson coach made headlines when he made it a requirement for his varsity players to complete seven hours of community service before they could try out for the team.

And longtime head football coach Mark Wooton retired at Pleasant Grove. The Vikings will be led by Taylor Walkenhorst, who has coached at both the high school and college level. Pleasant Grove will be in a bit of a rebuild, but a school with a long tradition of success and quality athletes won’t be down long, if at all.