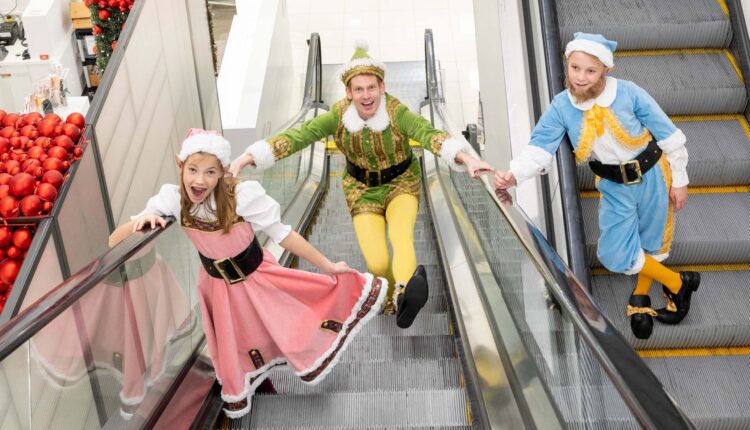 For many children of the 00s (and many of their parents), the image of Will Ferrell gleefully terrorizing a Macy’s, along with the leg lamp A Christmas Story and the pathetic tree in A Charlie Brown Christmas, belongs in the Christmas movie canon. Now the modern Christmas classic will get full Broadway treatment in a musical production by the Pioneer Theater Company starting this Friday.

Based on the 2003 film, Elf follows Buddy the Elf, who with 6’2 ”stands out like a sore thumb among the elves in Santa’s workshop. As an adult, Buddy the Elf learns he’s not an Elf at all – he’s a human who was adopted after sneaking into Santa’s pocket as a baby. Heartbroken, Buddy leaves the North Pole and travels to New York City to connect with his real father. Far from Santa’s workshop, confused, upset, Buddy’s overwhelming love for Christmas and childlike personality bothers and eventually wins over the cynical New Yorkers he meets.

For people of my generation – young enough to still believe in Santa Claus when the film hit theaters – elf is a solid Christmas staple. (The film is engraved on my brain with countless pre-winter views in elementary school. It still feels best to watch it on a clunky television rolled into a carpeted classroom.) Almost two decades later, the mix of the film’s confident humor and warm and fuzzy Christmas cheer still works – the endlessly quotable dialogues and serious performances drown out the Christmas movie clichés like candy (and candy canes, sweetcorn and syrup). This music adaptation, which premiered in 2010, captures the nostalgia of the film and adds a peppy Broadway pop score.

Elf’s debut at PTC was in 2013, when it became the company’s all-time favorite Christmas production. In this new production, Buddy will be played by Max Chernin, who last appeared on PTC in Bright Star, with other leading roles including Antoinette Comer, Christopher Gurr, Mary Fanning Driggs and Jason Simon. Elf’s director Alan Muraoka has a lot of experience in family-friendly entertainment. In addition to a decades-long career as a theater actor and director, Muraoka is best known for his role as Alan on Sesame Street. (The character was introduced as the owner of Hooper’s Store in 1998, and Muraoka has been a performer ever since.) That year, he starred on an episode of the show “Family Day,” which featured a family with two gay fathers.

Salt Lake spoke to Muraoka about Elf, Sesame Street, and his career in television and theater.

Salt Lake: What can the audience expect? Eleven?

Just in time for Christmas time, this show brings funny and unforgettable songs, wonderful humor, energetic dancing and a great story with a heart. The idea that Buddy the Elf is in search of his family and a place to call home while spreading friendliness and joy that touches everyone he meets is the greatest message one shares at this time can. This is the perfect show to share with family and friends and I’m so excited that everyone is coming back to the theater for the fun.

SL: Tell us about your experience with this Pioneer Theater Company cast and crew.

This is my first time working with the Pioneer Theater Company and I am so grateful for this opportunity. Everyone on the creative staff is so friendly and cooperative and I appreciate that.

Our cast consists of a combination of great local talent and NY actors, and I’m always amazed at how quickly strangers can connect and become families in the theater. I have personal experience with some of the performers and creative staff. Our musical director, Tom Griffin, hired me for my first professional acting job in LA in 1983. Choreographer Rommy Sandhu and I have been known for years but have never worked together before. One of the actors, Howard Kaye, and I did the original Broadway production of Miss Saigon in the mid-1990s, and another actor, Danielle Decrette and I, did the National Tour of Lincoln Centers Anything Goes in 1989 and shortly thereafter to raise three beautiful girls. This is her return to the gig after many, many years.

SL: You spent more than two decades with it Sesame Street, but you also worked extensively in the theater. What do you like about working in live theater?

I love both theater and television for a variety of reasons, but the most beautiful and unique thing about theater is that it’s live. Anything can happen in live theater, so every performance is a little different. I think it’s great how the audience plays a big role too. Actors feed on the energy of an audience, and so the audience is an integral part of the overall theater experience.

SL: You worked both behind and in front of the camera on an iconic show for children and families. What did you learn about Sesame Street about gigs for that particular audience? How did you apply this experience? Eleven, another kid-friendly production?

Sesame Street taught me so much, but the best it has taught me is how intelligent and intuitive kids are and that is why you always have to be honest with them. I always approach every show to find truth and honesty in the material. What are the essential heart moments? Where and how does humor come into the world? You always start there, then find the style of each production, and expand and upgrade from there. Elf lives in a very fast-paced, almost sitcom-style, but also has such a big heart. So it’s about finding the balance and energy that are required for both elements to shine.

SL: You recently co-directed Family Day, an episode of Sesame Street with a gay couple. What did it mean to you to share this story with a queer family?

It is very important to me that everyone feels represented on Sesame Street, because we strive to be a world of inclusion, diversity, kindness and love. I was very proud to be part of this episode which shows that there are many types of families and that each of them should be understood and accepted.

SL: You were up now Sesame Street for more than 23 years. When you were originally cast, did you ever expect to be on the show for that long? What do you care about coming back every season?

My first season of Sesame Street was in 1998, and we celebrated 30 years on the air. In my mind as an actor coming from the theater, a show lasts anywhere from a few months to a few years. So in my head I thought, “If I can make it on the show for five years, it’ll be a great run.” Now that I’ve been with Sesame for 23 years it’s both amazing and surreal. What makes Sesame Street so unique and special is that we have been producing new shows and addressing cutting edge issues that affect children here in the US and around the world for 52 years. The past year and a half is a perfect example. During the pandemic, we realized that both children and families had so many questions, so we partnered with CNN to host Town Hall specials on COVID for children and parents to submit questions and a panel of experts (Doctors, scientists and educators). ), along with our beloved muppets, helped provide answers and support. We also have specials in response to the need for the Black Lives Matter movement (Emmy Award-winning The Power of We) and in response to the rise in racist incidents against Asian Americans (See Us Coming Together, which premieres on HBO on Thanksgiving Day) created Max, PBS and YouTube). I take great pride in being part of a show that educates, entertains, and teaches kids everywhere to be smarter, stronger, and kinder.

SL: You recently directed another production in Utah: the world premiere of Goldberg with the Utah Shakespeare Festival. Tell us about this production and your experiences with it.

Gold Mountain was special to me because it was the culmination of a seven year collaboration between composer and playwright Jason Ma and me. We both thought the show was a testimony to the history of these Chinese railroad workers who helped build the Transcontinental Railroad, literally helped found the United States of America, and then was erased from the history books. It was a love job and I was so happy with the production, the actors, the designers and the warm and welcoming welcome from the SLC community. We hope it has a bright future, and we are grateful that it started in the state where these two trains met in 1869.

SL: Were you in Utah before directing these two productions? How did you like being here?

I’ve spent time in both Cedar City and SLC, and I have to tell you that sometimes I look at the mountain ranges in the mornings and at sunset while the sun is shining on them and it takes my breath away. I was last at SLC and Ogden in 2019 when we celebrated Spike 150 with a concert version of Gold Mountain and I was intrigued by the city, the people and the food. One of my favorite foods for sale here in town is a pastry called kouign-amann, which is basically a sugar-rolled croissant that is both caramelized and buttery. My personal favorites are from Evas and Les Madeleines, and I’ve introduced these little heavenly pieces to all of our NYC actors and designers. I gave a few to the Gold Mountain cast and crew for the opening night, and they absolutely loved them.

SL: Tell us what else you would like to tell the readers about this musical.

For many of our performers, this is their first live show since the pandemic that closed theaters across the country and there is an urgency to return to live audiences. So we are ready for you SLC. I hope you are ready for us.

Elf will be performed at the Pioneer Theater Company from December 3rd to 18th. Tickets and more information can be found on their website. Read all of our theater reports.