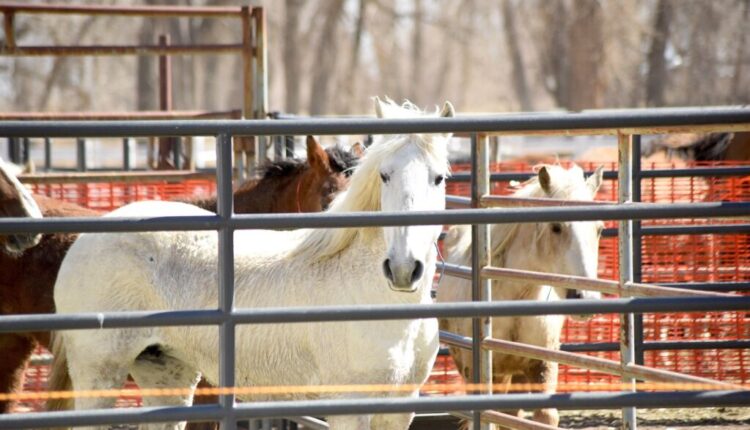 Horses stood in corrals waiting to be adopted in March as part of the Bureau of Land Managements first auction for horses gathered from the Sand Wash Basin last fall.
Dylan Anderson/Steamboat Pilot & Today

BLM Colorado spokesperson Steven Hall said on Tuesday, April 26, that the agency is working with Colorado State University and the University of California Davis to identify the illness.

“We’re hoping to have that answer as soon as possible,” Hall said. “Two different universities are helping with the analysis, both in terms of tissue samples, blood samples and necropsies, so we are doing everything we can to find that answer.”

There are more than 2,500 wild horses at the facility, including most of the horses gathered from the famous Sand Wash Basin herd in Moffat County last fall. The first of these horses were adopted last month.

Hall said horses gathered from the West Douglas herd management area last fall have been the most impacted, though he said he didn’t have precise metrics on the origin of each of the horses that have died.

“That doesn’t mean that there hasn’t been a Sand Wash horse or a few Sand Wash horses affected,” Hall said. “Primarily, this has been in the West Douglas population.”

The deaths were sharply criticized by the American Wild Horse Campaign on Tuesday, saying BLM roundups that have put more than 60,000 wild horses in government corrals are at the heart of the problem. BLM contends roundups are necessary to get populations back to a manageable level.

“The agency is planning to round up and remove another 19,000 wild horses and burros from public lands this year,” said Suzanne Roy, executive director of the advocacy group, who has been a harsh critic of how the BLM manages wild horses across the West .

“We can expect to see more suffering and death if the BLM continues down this dangerous and destructive path,” Roy continued.

In the statement, the Wild Horse Campaign said the agency noted horses rounded up during the West Douglas gather near the Utah state line were segregated in Cañon City pending additional testing for Equine Infectious Anemia, an infectious disease that had been confirmed in horses in nearby Uintah County, Utah.

Hall said there was a condition associated with some of the horses gathered from the West Douglas area, but he didn’t know if that could have contributed to this outbreak.

“That’s an area that’s unsuitable for wild horses and has been for years due to vegetation (and) access to water,” Hall said. “It’s not surprising if some of the horses from West Douglas were gathered with existing health conditions.”

The West Douglas gather last fall was focused on horses that were technically outside of the herd management area. In the minds of land managers, the horses do not belong there at all.

Before the Sand Wash Basin gather, the round up in the West Douglas area was the largest in Colorado history, with 457 horses captured. A month later, the BLM removed 632 horses from Sand Wash Basin.

This is the second outbreak of an illness at a BLM facility holding horses this year.

On March 28, the BLM said it would cancel an adoption event scheduled for April 1 at its Wheatland Off-Range Corral facility in Wyoming because horses there had an upper respiratory illness called Streptococcus equi, or “strangles.” The March statement says the illness is similar to strep throat in humans.

Last week, the BLM canceled another adoption event at the Wyoming facility, saying horses have not yet fully recovered from the “lingering illness,” however, the BLM hasn’t reported any deaths at that facility.

“Some horses are still showing signs of illness,” the BLM’s April 22 statement reads. “Therefore, the closure and quarantine will remain in effect until a veterinarian determines the horses to no longer be infectious.”

Hall said he didn’t know of a connection between the facilities that could explain the outbreak.

Large outbreaks like this are uncommon at the Cañon City facility, Hall said, which has the capacity to hold up to 2,900 horses. Hall said he did not know how many horses have been sick, just the number that have died of the illness.

Hall said that outbreaks among livestock in general is “something that happens,” and it is “not surprising that some of the same diseases or ailments that can affect domestic livestock can get into a wild horse corral as well.”

“The plan is to try to find out and to figure out what is causing this, and to figure out a way to protect as many of the horses that are in this facility as possible,” Hall said. “And also not allow this to spread to other horses.”