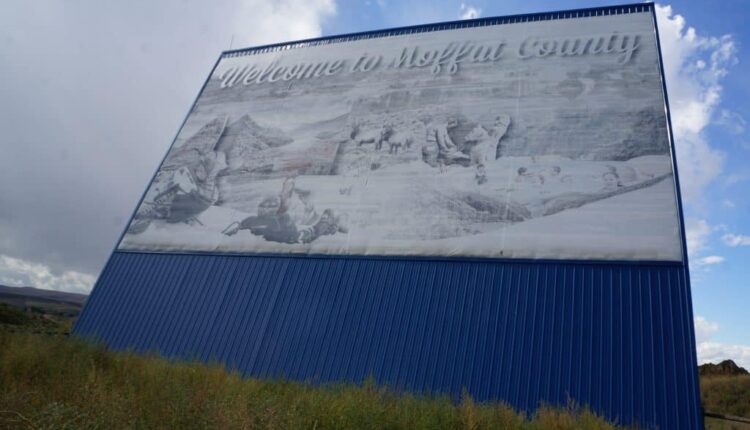 The mural on the Craig drive-in on US Highway 40 has been worn and faded over the past several years.
Amber Delay/Craig Press

Editor’s note: this story was updated to make a correction to the location of the drive-in mural in Craig.

Efforts to update the mural on the east side of Craig are underway, and local officials are hoping to see all the pieces come together by this spring.

Craig Chamber of Commerce Director Jennifer Holloway said the chamber had a lease with the owner of the drive-in building that displays the mural for the last 12 years. The current mural came from a print that was created by a sign-maker using a compilation of images and installed as a chamber project in 2015.

When Holloway joined the chamber in 2018, the mural was already faded, and there have been many conversations over the years about replacing it.

“I am excited to get a mural up there,” Holloway said. “I can tell you, it does draw attention. If you see some of the films we’ve made over the years or the time we were featured on CNN, you can see that sign.”

With nearly 3,000 people commuting on US Highway 40 for work daily, the sign is one of the first things drivers see coming into Craig, and Holloway wants it to be something that makes locals proud.

The project is being undertaken by a committee formed by the chamber board, which put out a request for proposals earlier this year and chose three submissions as finalists.

The finalists include two local artists, Nini Shroyer and Israel Holloway, along with Ninty1 Designs, a mural company out of Vernal, Utah.

One of the reasons officials at the chamber want a real-art mural — rather than working with another sign-maker — stems from the chamber’s efforts to incubate the arts through partnerships and provide space for local artists at the Yampa Building at 775 Yampa Ave.

Funding for the project has not been fully secured yet, but the chamber has been working on designs and getting community feedback. Community members can sponsor one of the designs with a donation between $1 and $20 through the chamber website.

Chamber board member Randy Looper said the committee is getting input from the chamber board, public comments and local surveys to help make the final decision, which could come down to the project funding.

The project is estimated to cost between $50,000 and $100,000, so the committee is assuming there will be multiple donors who will make a contribution and want to have some input. Looper said that the reason the chamber decided to take this project on now is because there is funding available for these kinds of projects.

When the current mural was installed in 2015 with $12,000 in sponsorship funding, the chamber had planned to continue fundraising through sponsorship banners. However, because US 40 is a state-controlled highway, CDOT wouldn’t allow the sponsorship banners at that location.

While the updated mural will require a larger investment than the previous sign installation, the committee anticipates the new mural will last about 15-20 years.

No matter what the final design is, Looper said project could start this spring at the earliest.

Over the fall, the committee will continue to work with potential sources for funding to secure support for the project, and the deadline for community members to weigh in is Oct. 1.