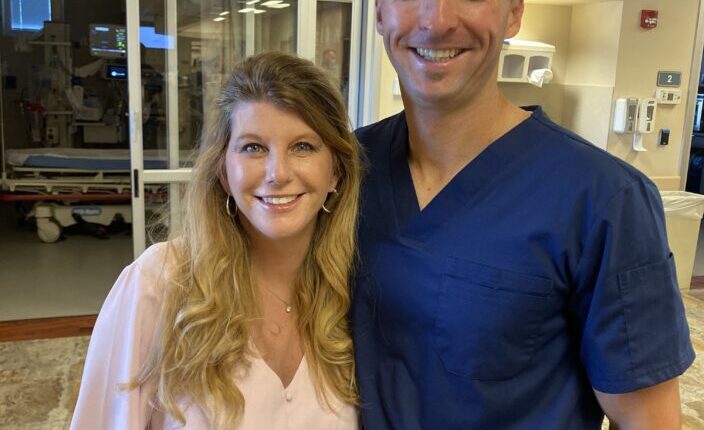 Wendy Spradley poses with Dr. Daniel Humphries on Tuesday, Sept. 20, 2022, inside Ogden Regional Medical Center. Spradley was there to give Humphries a thank you gift for his role in diagnosing her brain aneurysms last May.

Wendy Spradley poses with Dr. Daniel Humphries on Tuesday, Sept. 20, 2022, inside Ogden Regional Medical Center. Spradley was there to give Humphries a thank you gift for his role in diagnosing her brain aneurysms last May.

OGDEN — Wendy Spradley’s recent trip to the grocery store left her in tears.

She said if it hadn’t been for the heroic efforts of Dr. Daniel Humphries, she may not have been here to complete what most people consider such a mundane task.

“I no longer think, ‘Oh, I have to do this. Now I think, ‘Wow. I get to do this,’” said Spradley, 53, of South Ogden. “It was such a privilege to be able to go to the grocery store. I feel lucky. If it hadn’t been for Dr. Humphries, I probably wouldn’t be here today.”

On May 27, Spradley woke up feeling dizzy. She was also off balance and couldn’t walk straight. When she went downstairs, she got a glass of water and tried to make herself an egg, but she ended up collapsing on her living room floor.

“Everything was spinning. I was very nauseated,” she said. “I had been on a hike the day before and I thought maybe I was just dehydrated.”

“A lot of people deal with vertigo and it can be caused by many different things, but Wendy was having a hard time walking and that was a red flag for me,” he said. “As we get older, there’s a stroke syndrome that can cause vertigo, so that was my first thought and we started activating what we call a stroke protocol.”

After several tests, the good news came that Spradley wasn’t having a stroke. But there was bad news. She had a brain aneurysm that was so critical, she needed to see a neurosurgeon right away.

“This one was like a ticking time bomb. It was bigger than what we typically see,” Humphries said. “We talk about the rule of thirds when it comes to brain aneurysms. A third of the people will die, a third will live but have lifelong disabilities and a third will have complete recovery.”

An aneurysm is an abnormal bulge in a weakened wall of a blood vessel. They can occur in the brain, aorta, spleen, back of the knee or intestine. If the aneurysm bursts, it causes internal bleeding, which is a medical emergency.

Spradley was sent to University of Utah Hospital where further testing revealed two additional aneurysms. Doctors told her the aneurysms were stretched to the limit and could burst at any time. Surgery was done to remove two. The other one was left intact because doctors said it wasn’t causing a problem.

“The University of Utah neurosurgeons were so helpful in consulting and evaluating and instrumental in treating Wendy,” Humphries said. “She had quite a long recovery ahead of her that included physical and occupational therapy. As a physician, you really rely on your staff and nurses and everyone just did an amazing job helping her.”

Throughout the experience, Spradley said she was showered with love and kindness from neighbors, co-workers, members of her church and even complete strangers.

“This has been the hardest physical thing I’ve ever been through, but it has also been such a gift and a blessing to realize how many people were there for me,” she said. “I have always told my kids love is the greatest gift, but after a surgery like this, there’s so much more depth in what you see in others and how you look at life.”

On Tuesday, Spradley took a thank you gift to the hospital and presented it to Humphries.

“Sometimes these doctors just don’t know how grateful we are,” she said. “He is truly one of my heroes. There was no way I could not find the time to thank him. He helped me and saved me and started me on the path on a true discovery of myself. His life has great purpose.”

Humphries said he was humbled by the thank you gift.

“For her to reach out meant a whole lot to me,” he said. “Wendy is one of the nicest and most positive people I’ve ever met. For her to go out of her way like this really hits home and you realize it’s all worthwhile.”