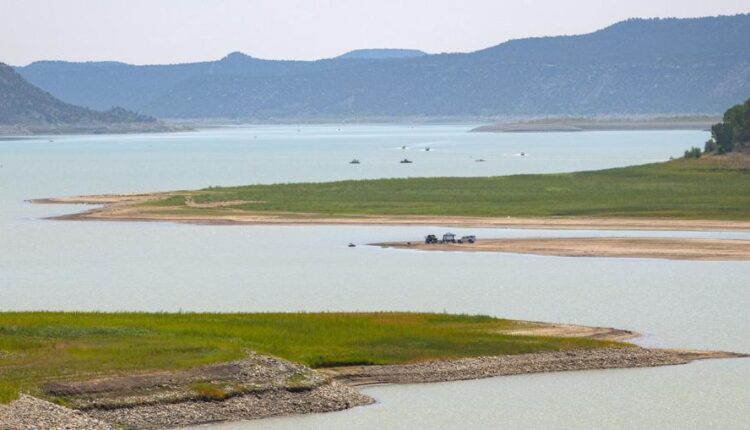 A visit to ‘Colorado’s Answer to Lake Powell’: Ode to Navajo | lifestyle

ARBOLES • Time seems to have stood still in the rural outskirts between Pagosa Springs and Durango.

The eye mostly sees untamed land, sage fields and high cliffs, where the ancestors’ Puebloans settled and left their mark. The Chimney Rock National Monument tells their story. These twin towers rise along Colorado 151 and then disappear in the rearview mirror on the way to the Navajo Reservoir.

As beautiful as the reservoir is, it’s a disturbing symbol that time never stands still, an area of ​​15,600 hectares that is a reminder of progress.

“Colorado’s answer to Lake Powell,” describes the managers of Navajo State Park, whose waters stretch 35 miles to the mesas and canyons that share with New Mexico, where the dam was built in 1962.

Navajo shares the burden of the drought with Powell – a fact that surprisingly became apparent this year.

For the first time, Navajo is being drained to support the downstream reservoir, which has hit historic lows. The Blue Mesa and Flaming Gorge Reservoirs, other units of the Colorado River Storage Project, are also being drawn for Powell.

With releases scheduled for November and December, Navajo is expected to drop 2 feet, said Brian Sandy, park manager. This is in a century when the reservoir experienced its lowest level ever.

To Sandy, it looks like levels won’t drop to the 2003 record highs. However, given climate change, the future prospects remain bleak.

“The realist in me knows that as long as we stay in this drought pattern, we will continue to see low water levels,” Sandy said.

That will put an ongoing strain on the Navajo nation, largely dependent on the reservoir of the same name, along with other tribes and communities across the state line including Gallup and Farmington.

What for boaters, anglers, and outdoor enthusiasts in Colorado who have come to love the reservoir? The manner in which the park’s boat ramp is located “could still start (visitors) even in exceptionally low water levels, as long as the river is flowing,” Sandy said.

Their number has increased in recent years. In 2020, Navajo State Park counted nearly 390,775 visitors, consistent with the increases seen outdoors during the Colorado pandemic. That was 36% more than in the previous year.

It underscored, as Sandy put it, “the difficult balancing act” he and the Rangers expect to master in the years to come – an act between increasing demand and maintaining it.

A Denver & Rio Grande Railroad railroad car stands near the Navajo Reservoir in Colorado. The narrow-gauge railway was diverted in 1962 due to the construction of the dam. The train ran in early 1970 when the railroad between Durango and Chama, NM was shut down due to a lack of revenue.


Photos by Christian Murdock, The Gazette

Still, there is plenty of space along the reservoir, which is the largest in the Colorado Parks and Wildlife portfolio. No other offers this experience, in which you float seamlessly between two countries, between rugged narrows, wide mountain views and noble marinas. Fishing is highly regarded below the dam, where perch, pike and kokanee salmon lurk.

“This is the lake some of your friends forgot to tell you about,” read a park brochure. “You want everything to yourself.”

Dog prints are pressing into the drying mud along the Navajo Reservoir earlier this month as the water level is lowered to feed Lake Powell downstream.

Sandy said, “We often hear visitors say they never knew this was here.”

Take a look around, a shield conjures them up. Look for “Evidence of Times Past”.

There is evidence of the Denver and Rio Grande Railroad, which headed west towards the fast-growing mines in the San Juan Mountains in the 1880s. By then, families had emigrated north to earn a living, as, like the indigenous people before them, they were drawn to the river. They settled in a town called Arboles, which is Spanish for trees.

The trees were uprooted, as were around 50 families, when the dam was built and the valley was flooded. Evidence for these people is difficult to find today.

However, the ground they walked on has surfaced again. This visit was muddy, as if the water had just receded. Smoke hung in the air, fires burned in the west. A distant train could be heard.

But it was quiet at a vantage point, a pavilion high up and away from the reservoir. Look, conjured a sign. Hear. Listen to the flow.