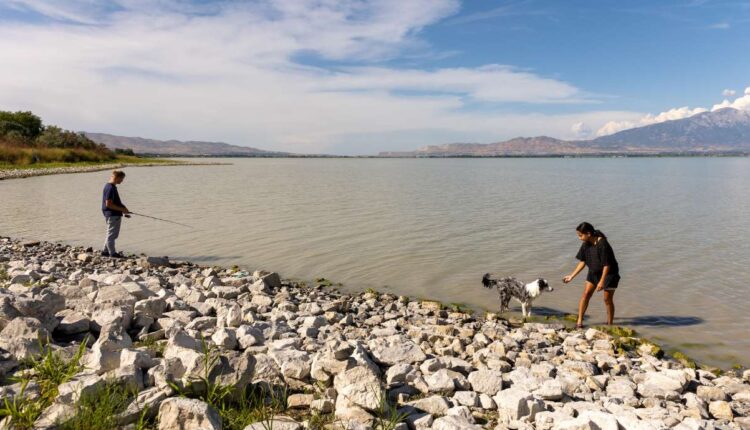 After state strikes island idea, what’s next in the effort to restore Utah Lake?

Joshua Larson fishes at Utah Lake while his girlfriend, Katelyn Molen, plays with their dog, Theo, in Saratoga Springs on Monday. A panel of scientific experts from across Utah met Tuesday to discuss what’s wrong with the lake and how those issues can be addressed. (Ben B. Braun, Deseret News)

PROVO — Kevin Shurtleff’s first experience with Utah Lake came as a teenager when he went to water ski on the lake in the 1970s.

He points out there were harmful algal blooms back then much like there are now, though, perhaps not as well known as they are today. But looking at the lake decades after his first encounter, Shurtleff — a professor of chemistry at Utah Valley University — finds a new appreciation for it.

“The problem is people see marshland, these vegetation zones, as not beautiful. It’s all a matter of perspective, right? From my perspective, those areas are beautiful because that’s what harbors lots of plant life and animal life and things like that,” he said.

Now that Utah Lake is at the center of a statewide restoration focus, Shurtleff and other experts say they are worried some projects wouldn’t solve the shrinking of the lake, its algal bloom concerns or the infestation of carp; Rather, they say some restoration ideas would turn Utah Lake into something completely different than it has been, historically.

“That’s not restoration, that’s changing the whole nature of the lake,” Shurtleff adds. “It’s just changing the lake to what you want it to be instead of what it is.”

Shurtleff made those remarks during an online discussion about lake solutions hosted by the Utah Valley Earth Forum Tuesday evening. Over 100 people tuned in to watch as a panel of scientific experts from across Utah talked about what’s wrong with the lake and how those issues can be addressed.

The event was scheduled before a state official said last week a possible solution to restoring lake quality, creating islands from dredged lakebed material, was determined to be “unconstitutional.”

Utah Lake: Then and now

People have used Utah Lake for thousands and thousands of years. Some of the archaeological records near the lake date back to as early as 13,000 BC, Elizabeth Hora, an archeologist for the Utah State Historic Preservation Office, explained in a presentation earlier this year.

It has always looked about the same, though, says Sam Rushforth, emeritus dean of Utah Valley University’s College of Science. He came across old pioneer journals talking about a “blue, lovely, crystal clear lake” toward Utah Valley. But as they got closer, they wrote the lake wasn’t as clear as it appeared from afar.

“It was somewhat cloudy. And the early people who went onto the lake were very amazed by the emergent vegetation,” he said, pointing out the lake is home to nearly 700 different algae species. “When they were approaching the east shore from the west, they weren’t sure where to call the shoreline because of the abundance of emergent vegetation.”

Janice Brahney, an associate professor of watershed sciences at Utah State University, says studies have indicated there was an abundance of aquatic plants prior to European settlement, especially by Goshen Bay and the east side of the lake.

That apparently began to change when carp were introduced into the lake in the 1880s because it altered the lake’s ecosystem.

“We know that carp can be very destructive to vegetation growing at the bottom of the lake,” she explained. “They’ll pull it up and disturb the sediments. And once the sediments are disturbed, not enough light can reach the lake in order for new growth to occur.”

A change in the lake’s depth around this time also likely factored. Ben Abbott, an associate professor of aquatic ecology at BYU, points out that Utah Lake is actually deeper now than it once was because of a flow control structure installed in the area where the lake flows into the Jordan River. It raised the level of the lake by about 3 feet — the maximum depth of the lake is now 14 feet with an average depth closer to 10 feet.

“I think it is helpful to compare the lake to a wetland. … The last time that Utah Lake was really deep was before it was Utah Lake, when it was part of the Lake Bonneville system,” he said.

Irrigation systems and nutrient alterations from wastewater have also taken a toll on the lake. She added that there’s been a shift in healthier algae species to more of the cyanobacteria and blue-green algae associated with harmful algal blooms as the region’s population grows.

The ecosystem and hydrology helped turn Utah Lake into an important source for humans and wildlife alike, but the lake has struggled in recent decades. It’s currently listed at 42% of capacity by the Utah Division of Water Resources.

And tens of millions of pounds of carp have been removed from the lake over the past decade, but work to remove carp remains ongoing. All of these woes have caused the Utah Legislature to take interest in restoring and enhancing Utah Lake.

Despite all its recent issues, some panel members said Utah Lake really isn’t in as bad shape as some have led on. They believe minor fixes can help restore Utah Lake to its former glory.

“The lake is not in terribly bad condition,” Rushforth said. “(The) lake is a pretty darn important resource and it’s pretty darn fine.”

Those minor tweaks are already underway, says Keith Hambrecht, an invasive species coordinator for the Utah Division of Forestry, Fire and State Lands. The state division is one of the agencies with boots on the ground trying to remove invasive species, like phragmites, and repair native habitats.

He said that phragmites cover has been reduced by about 70% over the past six years, which is helping the lake become more biodiverse again. It’s slowly producing the desired results along the way.

“We’re not just seeing bird habits return but also pollinator habits,” he said. “We’re seeing a lot of native forbs coming back. And in some areas, massive use of monarch butterflies.”

It’s an amazing, beautiful, incredible place to be.

–Kevin Shurtleff, a professor of chemistry at Utah Valley University

That’s just one project he’s involved in. Other public agencies are studying underlying factors behind harmful algal blooms and working to restore the Provo River delta at Utah Lake. Wildlife groups have also been able to get the June sucker, a fish species endemic to Utah Lake and the Provo River, downlisted from endangered to threatened through projects to restore the lake habitat and the species population.

One of the more interesting ideas floated around came from Lake Restoration Solutions, which proposed a $6 billion-plus plan to create human-made islands by dredging the lake and using material at the bottom of the lake to create them. The plan would deepen the lake by an average of 7 feet, while also creating new islands for development, recreation and wildlife.

Many on the Tuesday panel had already opposed the plan. Then, last week, the Utah Division of Forestry, Fire and State Lands reported back to the Utah Legislature that the Utah Attorney General’s Office found that the plan was “unconstitutional and it is not legally sound.” The report added that the project “presents a risk” to the state of Utah, including possible permanent loss of sovereign land.

The organizer of Tuesday’s forum, Jim Westwater, said Lake Restoration Solutions was invited to join the discussion but did not respond to “repeated” requests to join the panel.

Abbott, who is being south by Lake Restoration Solutions, said he doesn’t believe the solutions have to be flashy. It might be as simple as looking at the lake’s history and repairing changes made to it over time — something already in the works.

“One of the most important things that we can do is mimic the hydrology of Utah Lake, where much more water went toward the lake,” he said.

The members of Tuesday’s panel agreed that more collaborative partnerships are needed to come up with solutions that help the lake, such as the scientific community working with public agencies on projects.

In the meantime, Shurtleff says this new interest in the lake is the perfect time for people to explore it as he did as a teenager in the 70s.

“It’s an amazing, beautiful, incredible place to be,” he said. “We need to reconnect with the lake. … Go spend some time on the lake. It’s fantastic, and as we do that, we can change the perception of the lake, and (that) will help us move forward with some of these efforts to improve water quality.”

Are the Gods Getting Dementia? | Opinion | Salt Lake City