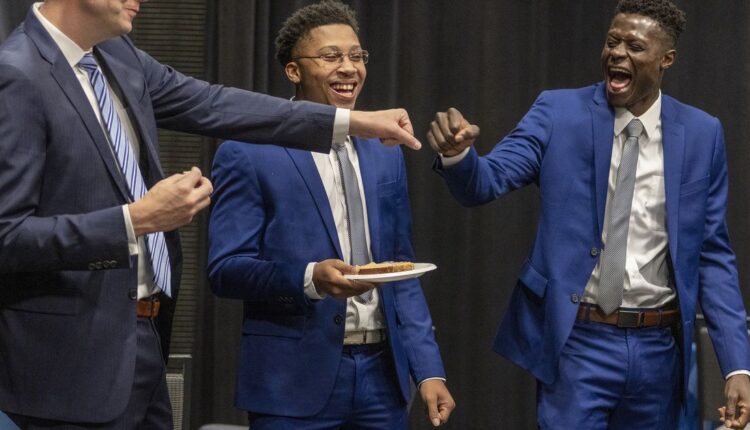 After the tough pandemic season, BYU men’s basketball focuses on “having fun in the gym”

Coach Mark Pope and the Cougars are aiming for a third straight Top 25 season.

If Alex Barcello could give Mark Pope a grade on how much joy the BYU men’s basketball coach brought to the gym last season, he would give a D-.

The coach now wants to improve that.

With a new basketball season approaching in Provo, Pope makes it a point to bring more fun into training and exercises.

“It has to be fun,” said Pope. “We have to be fun in this gym. It’s been a hallmark of our program since we’ve been together as employees. We did a bad job there last year so we really focus on that. … That doesn’t mean it won’t be difficult. That doesn’t mean we’re not pushing them like crazy, but it should be fun. “

The change in atmosphere is due in part to what has evolved over the past year and a half with the pandemic.

With a capacity of 19,000 people, the Marriott Center is by far the largest basketball arena in the West Coast Conference. (The next larger arena is the Alex G. Spanos Center at Pacific with a capacity of 6,150.)

Senior Gideon George paid his official visit to BYU when the Cougars defeated No. 2 Gonzaga in the final home game of the 2019-20 season. Fans stormed the pitch in Provo’s biggest win in years.

In a word, George described the scene as “epic”.

But last season the cougars were responsible for creating their own juice, playing in front of empty or mostly empty seats at the Marriott Center.

“I’ve never experienced such an atmosphere in my life. So I thought, ‘Wow, I hope to see that,’ ”George said, remembering that epic win over the Zags. “But with the pandemic everything was empty.”

The pandemic forced teams to isolate themselves in hotel rooms while playing away games and tournaments, including the NCAA tournament. The COVID-19 precautions challenged almost everyone in one way or another, but also caused major changes in college sports.

The WCC was hit hard at the beginning of the conference play – especially when it came to the California teams – with cancellations and postponements.

Compared to the team a year ago, however, the team’s mental strength is much stronger now, believes Caleb Lohner in his sophomore year.

“When you have fun in the gym and have fun,” says Lohner. “Nothing else should matter. At the end of the day, when you are really having fun with your team and you actually get better at it, I think it gives the team and the players some peace of mind just knowing, “Hey, we’re having” fun. We have fun in the team – we will be a good basketball team. “

Enjoying the gym is one of BYU’s top priorities this year as the Pope enters its third year at the helm and the Cougars look for a third straight top 25 and a consecutive NCAA tournament appearance.

The staff actually created a wall of words of words and sayings that the team believes in and wants to focus on this year, including “on time,” “relentless,” “getting better every day,” and more. Barcello said there might be 20 different sentences there.

“The coach always presents us with various challenges, such as how we can concentrate on this wall of words and how to implement it, which he has set up there for us and the coaching staff,” said Barcello. “But I would say to follow those in attitude [and] Exertion every day. How good are you at a teammate? Do you perform 100% when you step on the floor? “

Although the majority of the nation has reopened and developed a sense of normalcy over the course of the pandemic, the Cougars recently had a scramble where they faced a new dilemma that they hadn’t addressed last season.

Just days before the scrimmage, Pope said staff learned that only vaccinated players could participate and play. Although a staff member said the majority of the team was fully vaccinated, the vaccination rule forced the cougars to leave some of their cadre behind.

“We didn’t spend time complaining that it wasn’t our entire team,” said Pope. “We just said, ‘Hey, let’s keep going. Now we’re going to find a way to win that way. ‘ I think we just have a lot of practice doing that. I think we just get better with practice. The other thing I learned from this deal is that the joy of sports culture is really huge for me. “