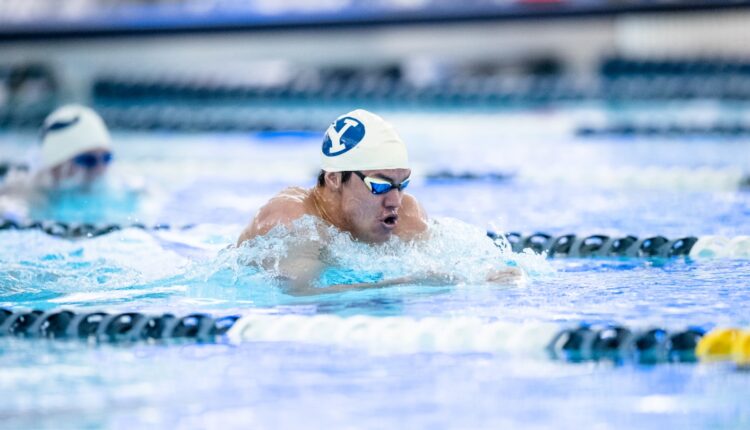 USAFA, Colo.– On Day One of the Air Force Invitational, the Falcons earned a second-place finish among the five teams. Air Force’s team score of 511.50 was good for a narrow runner-up finish behind Colorado State, as the Rams 519.50 claimed first place on Friday.

Katelyn Andrist gave the Falcons its first win of the night, as the freshman’s 5:06.91 in the 500 Free claimed victory in the race. For the second-consecutive weekend, Corinne Yorkman was the winner in the 200 backstroke. She bested her time from last weekend by two seconds, clocking in at 2:03.53.

Turner, as well as Lily Bachl, Kara Gavin, and Kai-Min Tsuei raced to a second-place in the 200 Free Relay, as the group touched out at 1:36.69.

USAFA, Colo.– The Falcons put an exclamation mark on the final day of the Air Force Invitational, as Air Force’s 468.5 claimed first place among the five teams at the Cadet Natatorium.

“What a great day of racing for our team today,” said head coach Colleen Murphy. “We have been really tired and sore coming back from our training trip and the first two weeks of school. But this team stepped up and raced hard, and the way they responded to racing two days in a row after an exhausting couple of weeks was incredible.”

Kai-Min Tsuei nabbed a win in the 100 backstroke, touching out at 57.18. Anna Ashley finished in second behind her teammate, clocking in at 57.68.

Katelyn Andrist raced to her second win of the weekend, this time in the 1650 Free. The freshman won the race with a time of 17:42.92.

Gabrielle Peltier collected her third runner-up placement of the weekend. After a stellar day on Friday, Peltier’s 238.95 awarded her a second-place finish in the platform dive.

Ashley, Corbyn Cormack, Abby Turner, and Kimberly Woolfenden raced to a close second-place in the 200 Medley Relay after timing out at 1:44.86. Cormack and Turner as well as Kara Gavin and Raquelle Roesch also nabbed a second-place finish in the 400 Free Relay.

“We are so proud of their grit and determination,” said Murphy.

Next, Air Force will stay home for the Colorado Sprint Championships on Saturday, January 28.

PROVO, Utah — At the conclusion of day one at the Air Force Invite, the BYU men’s swim and dive teams sat atop the leaderboard with 659 points, while the women placed third with a total of 437.50, narrowly trailing Colorado State and Air Force.

In the 3m, Strauss (393.65) and Hindmarsh (307.75) placed first and second again to help the Cougars finish in first for the day. For the women 3m, Jackson placed first again with a final score of 309.35, while Hailey Johnson also contributed to the Cougar point total with a 271.20.

The swimmers excelled on day one as well, with multiple athletes winning their respective events. The men started strong in the 400-yard medley relay as a team of Diego Camacho, Josue Dominguez, Brad Prolo and Brigham Harrison swam a 319.36 to place first in the event.

Individually, Harrison also went on to win the 50-yard freestyle event, swimming a 8:23 p.m. to pick up where he left off last meet. He would also go on to place second in the 100-yard freestyle with a 45.14. Camacho also found individual success in the 200-yard backstroke, posting a second place 1:50.81. The 200-yard butterfly featured a win by Prolo as well, posting a 1:53.97.

For the women, Regan Geldmacher (5:09.61) and Victoria Schreiber (5:10.64) helped get things going for the Cougars in the 500-yard freestyle event, placing second and third. In the 200-yard butterfly, Daniela Flores Bautista swam a 2:10.92 to contribute to the women’s point total. Halli Williams also placed third in the 50-yard freestyle, swimming a 23.91.

A team of Lily Flint, Julia Bartell, Emma Marusakova and Williams went on to place third in the 200-yard freestyle relay event, posting a 1:36.82, the highest finish of the Cougar teams competing.

PROVO, Utah — In the final day of the Air Force Invite in Colorado Springs, Colorado, the men and women swim and dive teams wrapped up their weekend of events with the men taking first (526 points) and the women third (340) for the second day in a row.

Saturday featured another strong performance from the dive team, as both men and women competed in the platform dive event. For the men, Mickey Strauss (323.40) and Chase Hindmarsh (319.50) led the way for the Cougar divers, placing first and second in the event. Carter Davis (264.90) and Cody Dreesen (261.55) also had solid performances, finishing fourth and fifth for the event.

The women divers also had solid performances in the platform event, with Alexia Jackson (243.20) and Hailey Johnson (204.75) leading the way, finishing first and third respectively. Sophia DeBergh (203.50) and Brooklyn Larson (199.20) came in a close fourth and fifth for the event, giving the Cougars four of the top five spots.

“I’m proud of the dive team’s ability to perform the new dives they have learned at our productive winter training trip for platform,” said dive coach Tyce Routson. “Chase Hindmarsh and Mickey Strauss achieved NCAA zone cut scores as well as Alexia Jackson for the women in the platform event. The team did an outstanding job in being mentally tough in a quick and competitive structure.”

“Our men won the invitational with some incredible performances from Andrew Eliason and Evan VanderSluis, and the whole team rallied together for the win,” said head coach Shari Skabelund. “The women battled hard for a third place finish. It was a grueling meet, but a wonderful opportunity to fine tune for the conference. I was very pleased with the performances from Megan Bergstrom, Regan Geldmacher, Victoria Schreiber and Addison Richards in the distance events at 7000 feet.”

The swimmers followed up yesterday’s solid performances with more individual and team victories Saturday morning. Once again, the men started quick, winning the 200-yard medley relay with a team of Diego Camacho, Josue Dominguez, Brad Prolo and Abraham Zimmerman with a time of 1:30.17. Camacho later went on to finish with the best time in the 100-yard backstroke, swimming a 50.31, good for a second-place finish.

The men closed the meet out strong, winning the final two events outright. In the 1650-yard freestyle, Abe Barragan went on to swim a 16:25.97 to place first for the Cougars. The day’s concluding event was the 400-yard freestyle, relay, where Camacho, Bonnett, Zimmerman and Brigham Harrison brought home the first place finish with a 3:02.46

For the women, the first event of the day featured a fourth place finish in the 200-yard medley relay by a team of Emma Marusakova, Abi Furqueron, Julia Bartell and Halli Williams, posting a 1:46.19. In the 400-yard IM, Richards also helped get the Cougars on the board, swimming a 4:40.64, good for a third place finish.

Geldmacher went on to win the 200-yard freestyle event, swimming a 1:54.62. This was Geldmacher’s second-straight day finishing in the top two of a freestyle event. In the following 100-yard breaststroke, Mackenzie Miller went on to post a third place time of 1:05.19 to help keep pace for the Cougars.

The second to last event of the day for the women displayed two top three finishes. Bergstrom (17:45.29) and Schreiber (17:47.79) went on to place second and third in the distance 1650-yard freestyle.

After a strong performance over the weekend, the swim and dive teams will look to continue their success as they get set to take on long time rival Utah Friday, Jan. 27 and Saturday, Jan. 28. More information regarding the upcoming meets will be provided in the coming days.