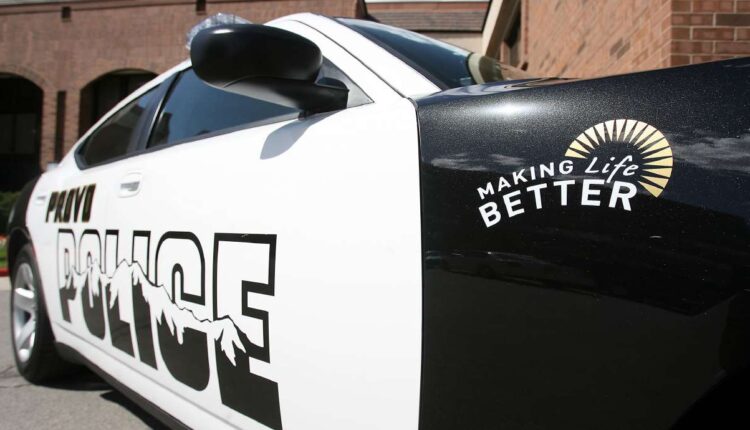 A man who had a no-bail warrant issued for his arrest by the Uah Board of Pardons and Parole was arrested at gunpoint in Provo early Thursday. (Laura Seitz, Deseret News)

PROVO — A man wanted by the Utah Board of Pardons and Parole was arrested at gunpoint early Thursday after police say the man grabbed his own gun when officers tried to arrest him.

No shots were fired during the tense confrontation and no one was injured.

The incident began just before 2 am near 70 E. 300 South in Provo, when police spotted three men who did not live there and were not allowed to be on the property, according to a police booking affidavit. Two of the men complied with officers’ orders to show identification.

The third man, later identified as Jordan Willey Wood, 28, of Provo, initially claimed he was someone else, the affidavit states. Police said they were able to determine that Wood was using his father’s name — which he has used as an alias in the past — and were able to positively identify him based on his tattoos.

Wood was wanted on a no-bail warrant issued by the state board of pardons. As police attempted to place Wood in handcuffs, he reached inside the pocket of his hoodie, the affidavit states, and one of the arresting officers “yelled out that Jordan had a gun.”

A stolen 9mm handgun with nine bullets in the magazine was recovered from Wood’s hoodie. He was arrested for investigation of three counts of aggravated assault targeting law enforcement, possession of a weapon by a restricted person, theft of a firearm, interfering with an arrest and giving false ID to an officer.

In 2015, Wood was convicted of aggravated assault resulting in serious injury for stabbing a man in the chest, according to court records. He was sentenced to a term of one to 15 years in the Utah State Prison.

According to the Utah Board of Pardons and Parole website, Wood was granted parole in March of 2020, but his parole was revoked five months later. In 2021, he was convicted in another incident of failing to stop at the command of police and shoplifting.

Wood was mostly recently granted parole in February. A warrant was issued for his arrest on May 1

KHN’s ‘What the Health?’: A Chat With the Surgeon General on Health Worker Burnout