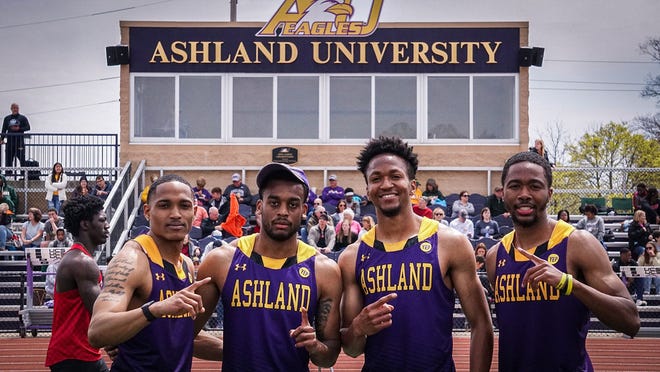 The following is a roundup of recent happenings in Ashland University sports.

Ashland’s men and women had some impressive performances during the final day of the Ashland Alumni Open on April 30.

The men’s 4×100 relay of Aaron Banks, Doniven Jackson, Channing Phillips and Keshun Jones finished first with a facility and school record time of 39.65 seconds while improving upon a previous provo. The quartet was named the Great Midwest Athletic Conference Men’s Outdoor Runners of the Week on May 2.

Ashland hammer throwers Kelsey Kinsley and Brent Fairbanks improved their provisional marks for nationals during the first day of the Ashland Alumni Open on April 29.

Ashland completed a four-game home sweep of G-MAC foe Findlay with an 8-7 win on May 1 at Tomassi Stadium and Donges Field.

Joel Ciccarelli (5-0) earned the win in relief. Perry Bewley, who was named G-MAC Pitcher of the Week on May 2, closed the door for his seventh save.

Eifrid broke the program record for career hits during the doubleheader. His 269 career hits moved him past Jacob Petkac (268) and into the top spot in the century of Ashland baseball.

Micah Allen led the way in the first game with three hits, while Seth Schroeder and Brady Cottom both had two hits. Bewley earned the win in relief.

In the second game, Allen went 3 for 3 with two homers, five RBIs and two runs scored. Devin Hukill added a homer and four RBIs, while Dillan Smith chipped in a homer and three RBIs.

Josh Meyer (5-2) earned the win, allowing two unearned runs in 6⅓ innings. Bewley picked up the save by tossing a perfect ninth inning.

Zeller led the offense with a two-run double.

The Eagles lost a 10-8 nonleague decision to visit Mercyhurst on April 26.

Age is just a number: Nathan Godsey is defying the odds as a member of AU’s wrestling team

Ashland finished the season with a G-MAC doubleheader split at Walsh, losing 8-0 in six innings and winning 10-2.

Jamie Rutherford went 4 for 5 with a double and three RBIs to lead AU (12-23, 6-16) in the second game. Kaitlyn Carney (two RBIs) and Alexis Lavdis both added two hits.

Hannah Fricke (4-5) struck out two over seven innings to earn the win.

Hailey Struckman went 3 for 4 with two doubles and an RBI in the first game, while Josie Duncan (8-17) struck out five in a complete-game victory.

Fricke struck out four in 6⅓ innings to earn the win, while Duncan got the last two outs for her first save of the season.

On April 27, Ashland fell 10-0 and 9-4 to Trevecca Nazarene in G-MAC action at Brookside Park.

Mollie Pentz paced AU with two hits (triple) in the second game, while Struckman had a solo home run.

On April 26, Ashland lost 9-5 and won 5-3 to earn a G-MAC doubleheader split with visiting Cedarville.

In the second game, Rutherford and Struckman (home run) paced Ashland with two RBIs each. Fricke struck out five in seven innings to earn the win.

Ashland ended the regular season with a 22-6 loss to Walsh in G-MAC action on May 1 at Ferguson Field.

The Eagles will play their first conference tournament game in program history at 3 pm Thursday against Findlay at Walsh’s Larry Staudt Field.