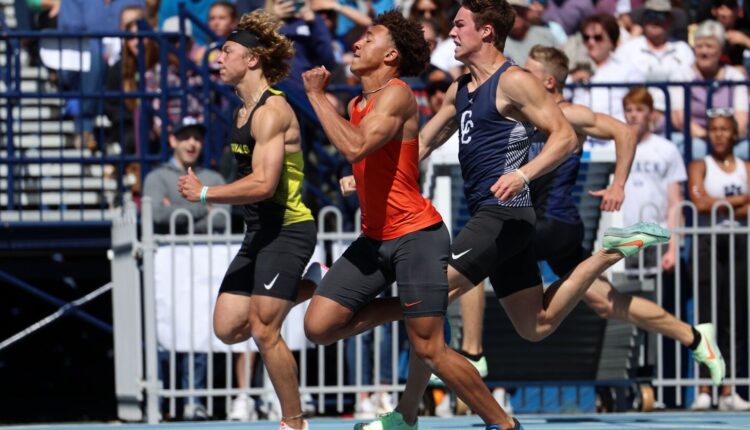 With the state track and field meet coming to a close last weekend, it was a year of repeats in many classifications.

Of the 12 combined boys and girls trophies that were handed out, seven were repeat winners. For the boys, Corner Canyon (6A), Orem (5A) and Panguitch (1A) all repeated as state champs, while repeat girls winners were Lone Peak (6A), Delta (3A), North Summit (2A) and Panguitch (1A ).

New champions for the girls were Box Elder (5A) and Desert Hills (4A), while the boys were Snow Canyon (4A), Richfield (3A) and Millard (2A).

Perhaps the biggest takeaway from the 2022 high school track and field season is that Utah isn’t just a distance state anymore.

Don’t be mistaken, the distance runners in Utah are still outstanding, but it was the sprinters who often took center stage each weekend as a collection of elite boys and girls sprinters pushed each other and chased records.

It wasn’t just one sprinter chasing records either, it’s been multiple boys and girls athletes pushing each other and pursuing state records.

While the story makers were sprinters this season, the quality of distance runners in Utah was still very high, but most weren’t record chasers. Only one distance runner — Lone Peak’s Taylor Rohatinsky — was a true threat to record books in 2022.

Lone Peak’s Taylor Rohatinsky crosses the tape during the 6A high school state championships at BYU in Provo on Saturday, May 21, 2022.

In fairness, the bar has been set so high in the past decade by past elite distance runners — many who have gone on to NCAA greatness — it’s extremely difficult for anyone to challenge those records anymore.

A handful of boys distance runners like Orem’s Tyson Echohawk, Lone Peak’s Jaron Hartshorn and then Farmington’s Ethan Peterson and Ryan Bennett cracked the top 10 in either the 1,600 or 3,200, but it could be a long time until another of those records actually fall.

That wasn’t the case for the sprints, as each weekend during the latter half of the season it seemed like a boys or girls sprinter was capable of posting that magical time.

Fremont’s Amare Harlan eventually did, as she set a new 100-meter state record this season with a 11.58 and posted the second-fastest 200-meter time with a 23.83 at the state meet — just .08 off the state record.

She tied the 100 state record with an 11.68 early in the season, but then lowered it further at the BYU Invitational. She even beat the 200 state record at the meet, but it wasn’t wind legal by 0.1. 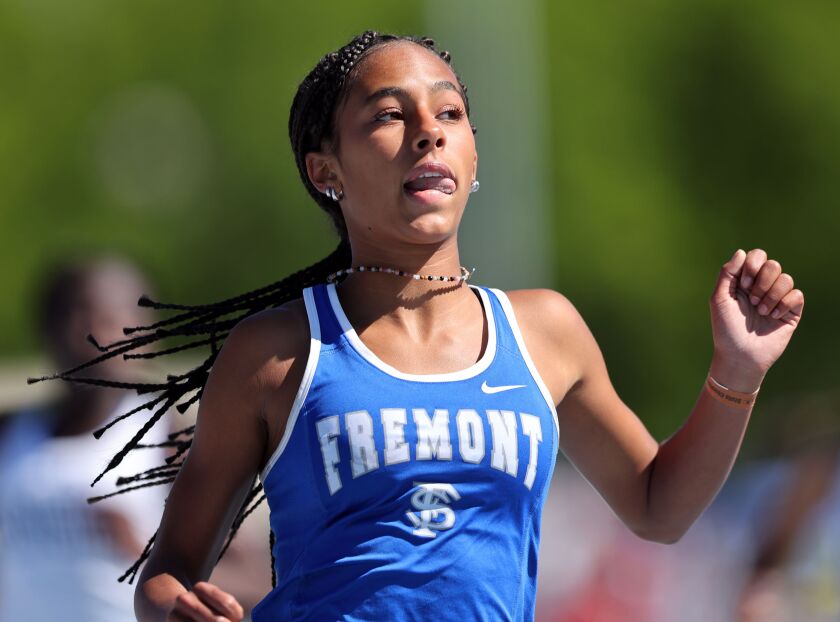 Fremont’s Amare Harlan competes in the 6A state high school state championships at BYU in Provo on Saturday, May 21, 2022. Amare set a new 100-meter state record this season with a 11.58 and posted the second-fastest 200-meter time with a 23.83 at the state meet — just .08 off the state record.

The junior Harlan was pushed by two more of the best sprinters the state has ever produced, Lehi junior Sarah Ballard and Farmington senior Marianne Barber.

For the boys 100 meters, Pine View’s Marcus McKenzie, Roy’s Parker Kingston and Skyridge’s Smith Snowden all posted season-best times of 10.54 this season. They ranked tied for fourth in state history and narrowly off the 10.47 state record time.

Cody Hagen’s best time in the 100 this season was a 10.67 as he worked his way back into sprinter condition after offseason double hernia surgery. His time of 10.52 last year is the second-fastest in state history, and some believe the true record instead of the 10.47 time from Murray’s Brian Hazelgren back in 1981 — which many believe was hand timed instead of laser timed.

While Hagen’s peers outdueled him in the electrifying 100-meter race at state, in the 200 later that evening Hagen left those same 6A peers in his wake as he won with a blazing 20.97. He became just the second runner in state history to run a sub 21-second 200, and was just .01 off the state record set by Pine View’s Dominique McKenzie last season.

Of the four elite boys sprinters from this year, only Smith was a junior and could be back next season depending on football recruiting and if he graduates early.

There were a handful of other juniors who posted sub 11 times this season, and it’s up to them to carry the mantle for the sprinters.

Harlan will for sure be back next year as she chases the 200 and long jump state records to go along with her 100 record. Currently only Ogden’s Feeny holds multiple state records (1,600 and 3,200), and Harlan is a good bet to join her or pass her in 2023. 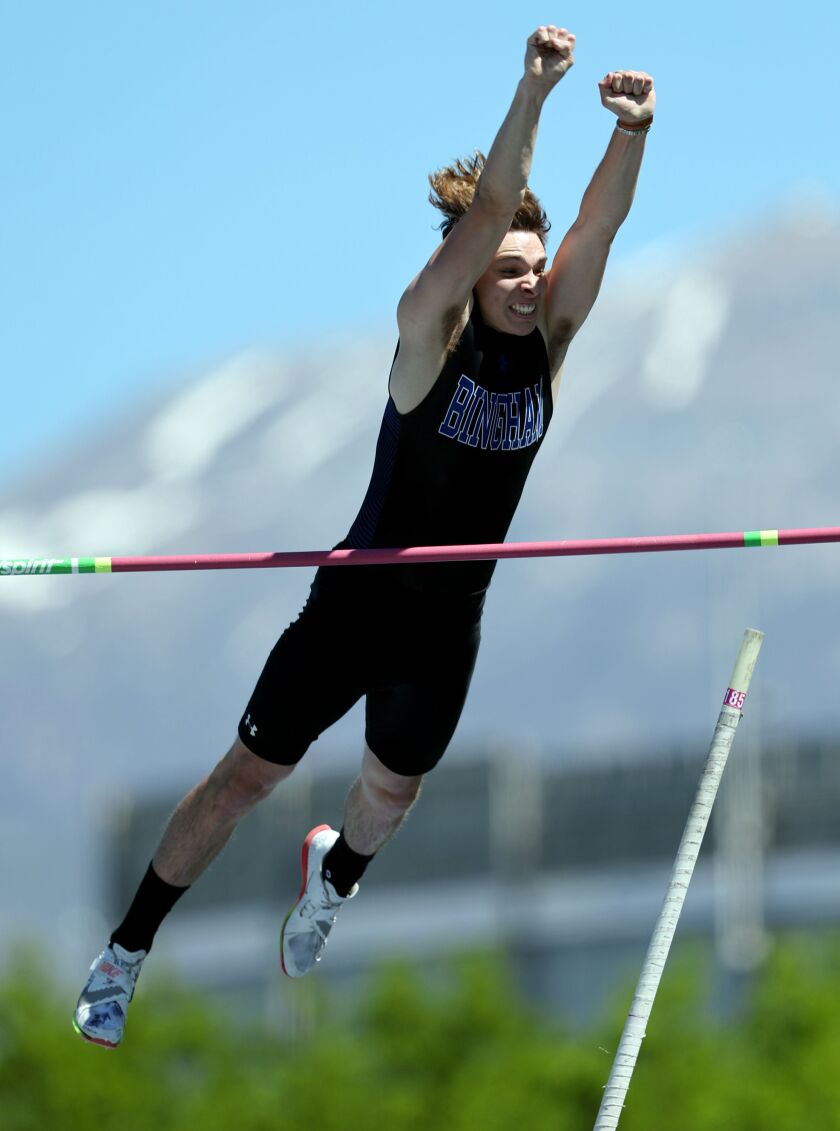 Bingham’s Dallin Thornton, clears the bar as he competes 6A high school state championships at BYU in Provo on Saturday, May 21, 2022.

In addition to Harlan’s record, there were three other state records set during the 2022 track and field season. Bingham senior pole vaulter Dallin Thornton raised the boys state record by six inches to 16’09 this season. In the girls pole vault, Copper Hills senior Brielle Davis raised her state record from 12’09 to 13’00.

‘Almost Like Malpractice’: To Shed Bias, Doctors Get Schooled to Look Beyond Obesity