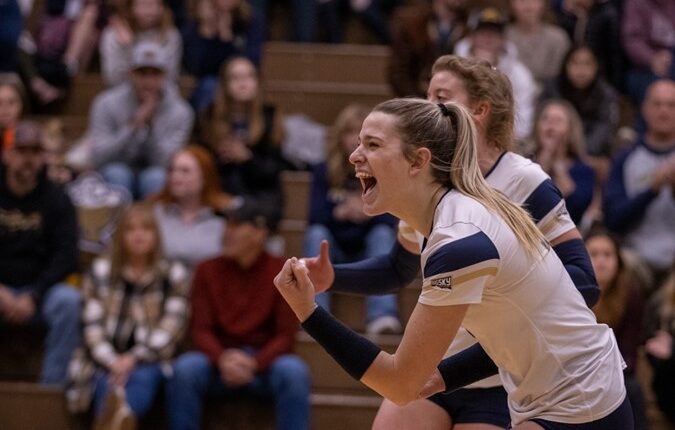 NEXT UP:  The Bobcat volleyball team will conclude its 2021 fall regular season schedule this week when it travels west to Oregon and California. MSU opens play, Thursday, Nov. 11 at 8 p.m. (MT) against league-leading Portland State. The Bobcats close regular season action at Sacramento State on Saturday, Nov. 13 at 2 p.m. (MT) at The Nest.

TOURNEY TALK:  Eight teams secured berths for the Big Sky tournament slated for Nov. 18 in Ogden, Utah. The teams include Northern Colorado, Portland State, Weber State, MSU, Northern Arizona, Sacramento State, Eastern Washington and Montana. This weekend’s matches will determine the seedings for the tournament. Currently, Northern Colorado, Portland State and Weber State sit in the driver’s seat for a regular-season title tied at 9-3 in league action. Montana State cannot finish lower than a No. 6 seed. MSU and NAU are currently 9-5 overall with the Bobcats holding the head-to-head tiebreaker. Sacramento State lurks one game back at 8-6. In addition, the Bobcats still have an outside shot to win its first-ever regular season title but would need some help.

THE SCOUTING REPORT: Portland State is 17-8 overall and 11-3 in Big Sky play after splitting a pair of matches last weekend. The Vikings dropped a 3-1 decision to Sacramento State last Thursday in the Rose City, before turning the table with a 3-1 win over Southern Utah in Cedar City. Two wins this weekend secures at least a share of the Big Sky regular-season title for the Vikings for the first time since 2013. Besides a share of the Big Sky regular-season title, two wins this weekend could also secure the Vikings the No. 1 seed at the upcoming Big Sky tournament, as well as hosting rights for next season’s Big Sky tournament. If the three teams finish tied with one another, then the tiebreaker goes to head-to-head record among the three teams. That favors the Vikings because they went 2-1 combined against Weber State and Northern Colorado, while Weber State went 2-2 and Northern Colorado went 1-2. If it ends up a two-way tie, then the Vikings’ seeding would depend on the team they end up tied with. The Vikings would lose the head-to-head tiebreaker with Weber State due to total points scored in their two matches (183-179 Weber State), while the Vikings would win the head-to-head tiebreaker with Northern Colorado due to their 3-1 win over the Bears on Oct. 23. In mid-October, the Vikings swept the Montana road trip for the first time since 2013. In its meeting with the Bobcats on Oct. 16, PSU handed MSU a 34-32, 17-25, 27-25, 25-17 setback in Shroyer Gym. Makayla Lewis and Gabby Hollins paced the Vikings with 18 kills, apiece, while Parker Webb chipped in 16 kills and 12 digs. The Bobcats were led by Kira Thomsen and Hannah Scott with 15 and 13 kills, respectively. Sacramento State is 14-11 overall and 8-6 in league action after defeating Portland State (3-1), before losing at Northern Arizona (3-0). The Hornets will face Montana on Thursday, before its match vs. MSU on Saturday. The Cats handed the Hornets a 25-22, 23-25, 25-14, 25-13 defeat on Oct. 14 in Bozeman. MSU was paced by Thomsen and Scott with 18 and 14 kills. Sacramento State was led by Bridgette Smith with 13 kills and 12 digs.

GREAT SCOTT: Senior Hannah Scott went over the 1,000-kill mark with her fourth block against Portland on Sept. 3. The Hawthorne, Calif, product became the 16th member of MSU’s prestigious 1000-kill club. Her 1,236 career kills rank fifth on Montana State’s all-time kills’ chart. On the season, she is averaging 3.02 kills per set. Last weekend, Scott averaged 3.01 kills and 2.31 digs per set. Against Weber State on Sept. 30, Scott had a season-best 22 kills. She had a season-best 15 digs against Montana on Oct. 26.  Scott’s best performance came against #7 Washington on Sept. 16 with 17 kills, while hitting .400 (17-3-35) from the floor. In addition, Scott added nine digs, five blocks and an ace as the Bobcats almost pulled the upset over the Huskies. Scott was named to the Boise State All-Tournament team to open this season. She has been in double-figure kills in 16-of-25 matches. Scott is currently first on the squad with 330 points. During the spring season, Scott had a breakout campaign which culminated in being named to the All-Big Sky First-Team as she averaged 2.89 kills, while hitting .232 from the floor.

CLIMBING THE LADDER: As the MSU program continues to improve, its numbers within the Big Sky statistical categories have shown remarkable improvement, as well. In the 15 team statistical categories, the Cats rank among the top three of the league in seven categories, including #1 in total blocks (233), team assists (1,152), and team kills (1,241), #2 in blocks per set (2.38 bps), and #3 in hitting percentage (.224), assists per set (11.76) and total attacks (3,307).

A LENDING HAND: Former Bozeman High product Allie Lynch is averaging 5.33 assists per game running MSU’s 6-2 offense. Lynch dished out a season-high 33 assists against Montana on Oct. 26. Last week, Lynch averaged 6.86 aps. On the season, she is also averaging 1.85 digs per set, including a season-best 13 saves, twice, the last against Portland State. Freshman Audrey Hofer has started eight times and has played in 23 of MSU’s 25 matches. The Helena Capital grad dished out a season-high 28 assists at North Texas and matched a career-high 11 digs against Eastern Washington, last Saturday. Last week, Hofer dished out 66 assists and added 20 digs against Idaho and EWU. On the season, she is averaging 5.21 assists per set. Hofer also chips in 1.52 digs per set. Hofer’s registered two double-double and is fourth on the team with 15 aces. Delaney Shearan is averaging 4.62 assists and 1.88 digs per set on the season. Shearan dished out a season-high 26 against Long Beach State in the first match of the season. Against Montana and Northern Colorado two weeks ago, she averaged 3.33 assists and 4.33 digs per set.

MAY I ASSIST YOU?:  Senior setter Allie Lynch is steadily creeping up the all-time Montana State assists chart. The Bozeman native went over the 1,000-assist plateau against Portland State on Oct. 24, 2019. Former Bobcat standout Brooke Olsen-Roush (1996-99) holds the all-time Bobcats record set back in the old 15-point sideout scoring era. Here’s a look at MSU’s all-time Top 10, and where Lynch stands:

TOOL TIME:  In two matches last week, Kira Thomsen totaled 24 kills and 20 digs, while hitting .367 and adding three aces and two block assists. On the season, she has been in double-figure kills on 17 occasions and has produced nine double-doubles. She matched a season-best 18 kills in MSU’s 3-1 win over Sacramento State on Oct. 14. Thomsen currently ranks first on the team in digs with 242 (2.49 dps) and service aces (29). She is second on the squad with 287 kills (2.96 kps). On Sept. 30 against Weber State, Thomsen notched a season-high 24 digs. Her 330.5 points is top on the team, with Hannah Scott second at 330. Thomsen earned tournament MVP honors at the Boise State Invitational to open the season after posting a .337 attack mark and averaging 3.42 kills, 2.83 digs and .58 aces per set. At the Bobcat Classic, the Parker, Colo., product averaged 3.00 kills and 1.64 digs per set with a .260 attack mark. And, at the North Texas Challenge, she averaged 2.55 kills and 1.18 digs per game. Last spring, Thomsen earned First-Team All-Big Sky honors.

THE GREAT WALL OF BOZEMAN: Sophomore Emma Pence currently ranks first in the Big Sky in blocks per set (1.40 bps), which ranks 7th in the nation. Pence’s 133 total blocks also tops the league and ranks second in the country. The Carson City, Nevada product has been in double-figure kills five times, matching a season-best 11 against Weber State on Sept. 30. Pence has matched a season-high nine blocks on three occasions this season, coming against Montana, Idaho State and Boise State. Last week, she averaged 2.57 kills and .57 blocks per set against Idaho and Eastern Washington. Pence, who was one of two players in the league that garnered #BigSkyVB Offensive and Defensive Player of the Week accolades during the spring, earned #BigSkyVB Defensive Player of the Week for the week of Oct. 4.

THE MENACE FROM ENNIS: Jourdain Klein, a 6-1 outside hitter from Ennis, Mont., averaged 3.29 kills and hit. 477 (23-2-44) against Idaho and Eastern Washington, last weekend. Against the Eagles, Klein recorded a career-high 16 digs, while hitting .556 (16-1-27) from the field. Three weeks ago, she was named #BigSkyVB Offensive Player of the Week after averaging 3.13 kills, 1.50 blocks and 1.13 aces, while hitting .358 from the field last week against No. Arizona and Southern Utah. At the North Texas Challenge in mid-September, Klein had a very efficient tournament hitting, recording a .444 (17-1-36) attack for the three matches. She tallied a season-high eight blocks against Arkansas. Last spring, she was named All-Big Sky Second-Team.

OPPOSITE DAY: Rightside hitters Avery Turnage, Kaycee O’Dell and Emma West have all played this season. West, a senior from Tempe, Ariz., started both matches last week and combined for 11 kills in seven sets. Turnage, a product of Idaho Falls, Idaho has played in 71 sets and is averaging 1.42 kills and .66 blocks per outing. She had a career-high 11 kills against Fresno State and a career-best seven blocks as MSU defeated Boise State in August. O’Dell, a sophomore from Glendale, Arizona, has played in 26 sets and is averaging 1.12 kps. She had 11 kills against North Texas in September.

JORDAN IN THE MIDDLE: Freshman Jordan Radick posted 10 kills (1.43 kps) and three blocks, while hitting .250 against Idaho and Eastern Washington. Radick, a graduate of Bozeman High, had her best outing against EWU on Saturday, recording six kills, a .286 attack mark and a block. Radick recorded a season-high 11 kills against Portland State and a season-high 12 blocks vs. Arkansas. She has tallied six matches hitting .400 or better.

TO BE OR NOT TO BE: Freshman Courtney Weatherby started both matches last week against Idaho and Eastern Washington. She averaged 4.0 digs per set. The matches were her first in a different colored jersey.