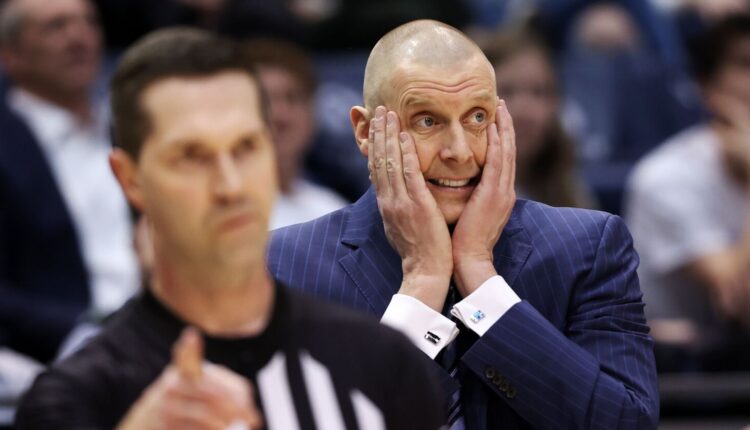 There are certain things in life you cannot unseen. For BYU basketball coach Mark Pope, his first experience in Istanbul, Turkey, remains a visual for the ages.

Pope, who had just won a national championship at Kentucky and was a second-round pick by the Indiana Pacers in 1996, opted to leave the NBA to play overseas in Turkey. After all, basketball is basketball. How different could it really be?

It didn’t take but his first day overseas to find out.

“I land in Turkey and roll in to meet the team,” Pope said Thursday on “BYU SportsNation.” “It was media day, and we were all in our uniforms.”

“We were all standing in a circle and the two guys slit the ram’s throat and collected the blood in a bucket.” — Mark Pope after landing in Turkey to begin his overseas playing career

The team was taken out into a courtyard where two men wearing orange jumpsuits walked in carrying a full-grown ram, a bucket and a machete.

What happened next seemed more appropriate for an Indiana Jones movie and not a meet-the-team event.

“We were all standing in a circle and the two guys slit the ram’s throat and collected the blood in a bucket,” Pope said. “Then they walk to each of us and dip their fingers in the blood and said something in a language I didn’t understand, and they wiped the blood across our foreheads.”

“It was an incredible culture moment,” Pope said. “I was like, where am I? But in good and bad ways. I’m thinking how incredible this is to be a part of, and I’m also wondering if I was going to get in trouble? Every day after that was just as much of an adventure.”

With an absence of animal sacrifice as a “team building” experience, Pope is still in the middle of constructing BYU’s roster and retooling its locker room. Another potential transfer candidate toured campus Thursday.

“We’ll get the roster done when we find the right pieces,” he said. “It’s more important that we are right than we are rushed. Always.”

The Cougars still have two scholarships to fill.

“I think it’s going to be like this every year,” Pope said. “There is going to be changes every year. It gives players a chance to go and find out what they think they want, and it allows us to rebuild.”

“Gavin gave his heart and soul to this place for three years, three unbelievably difficult, emotional years,” Pope said, referring to Baxter’s trio of season-altering injuries. “Who’s been through that? I’m so excited for him to have a fresh start. He deserves it.”

Lohner, a junior from Dallas, considered a number of potential suitors before picking Baylor.

“His road here wasn’t always easy. The fact that he can go have a fresh start is a special thing,” Pope said. “It’s good for him and it’s really good for us. I think the portal is good. I love the portal. Some of that chaos is a chance to reinvent ourselves and that’s what we are in the process of doing.”

Pope and Elijah Bryant are from different eras of basketball, but they are directly connected through three teams — BYU, the Milwaukee Bucks and Anadolu Efes SK

Bryant was born in 1995, two years after Pope transferred from Washington to Kentucky. He was just learning to walk when the Wildcats won the 1996 national championship.

Pope was an assistant coach at BYU in 2015, but left the Cougars to become head coach at Utah Valley just prior to Bryant transferring to Provo from Elon College.

The 6-5 guard played two seasons for Dave Rose before opting out of his senior year for professional basketball in Israel, where he led Maccabi Tel Aviv to the Israeli League championship in 2020.

The Milwaukee Bucks, a team Pope played for between 2000-02, picked up Bryant to bolster their playoff roster, and went on to win the 2021 NBA championship.

“It’s incredible. There are no words for it,” Pope said. “Team matter. When you get that reputation that ‘If you want to win a championship, go get Elijah Bryant,’ at whatever level — it’s pretty special. Not only that, he is an unbelievable human being and such a great representative of this university.”

Bryant is staging two days of basketball camps in Highland June 22-23, while Pope works his roster in Provo for BYU’s final season in the West Coast Conference before joining the Big 12.

Fortunately, both activities won’t include men in orange jumpsuits, carrying a full-grown ram, a bucket and a machete.

BYU coach Mark Pope celebrates after defeating Northern Iowa in an NIT game at the Marriott Center in Provo on Saturday, March 19, 2022.

KHN’s ‘What the Health?’: Taking a Shot at Gun Control