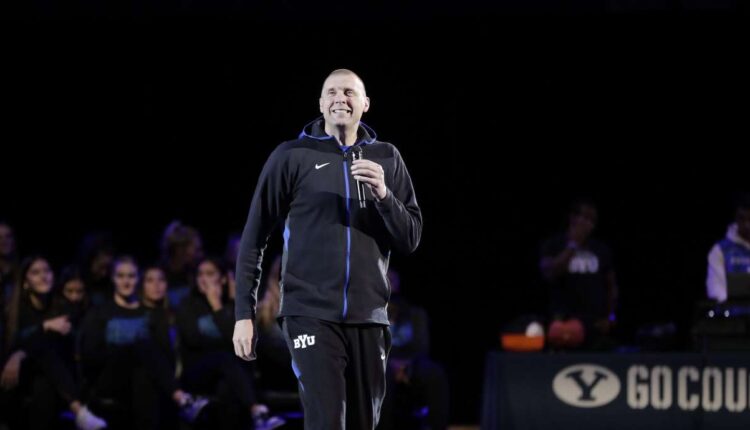 PROVO — The latest commitment to the BYU basketball program may sometimes act a fool, but promise he’s going back to school.

The Cougars announced Friday the signing of Braeden Moore to the recruiting class of 2022, a 6-foot-8 forward from Donda Academy, the Simi Valley, California-based prep school founded by rap mogul and societal icon Kanye West.

A four-star recruit by ESPN and three-star prospect by 247Sports and Rivals, Moore originally committed to Rutgers last July before de-committing in the fall and taking interest in Wisconsin, Nebraska, Arizona State, Auburn, Memphis, San Diego State and Houston, among others. He seemed particularly intrigued by Nebraska and Wisconsin, where he visited in addition to Piscataway, New Jersey.

“I want to thank my family, friends, coaches, and trainers who have invested in me,” Moore tweeted in committing to head coach Mark Pope, who is reaching for the stars, so if he falls he’ll land on a cloud. “Most importantly, I want to thank God for all he is done in my life.

“Excited for what the future holds,” he added.

The stretch-four who is not a member of The Church of Jesus Christ of Latter-day Saints but describes himself as Christian on social media is originally from Nashville, Tennessee, where he scored over 2,000 points in three seasons at Christ Presbyterian Academy.

Moore took an official visit to BYU two weeks ago, he told ESPN radio in Utah County, where he met with former BYU star Alex Barcello and toured the campus and area with star forward Fousseyni Traore and guard Trey Stewart. He also learned about the unique culture at BYU, including the Latter-day Saint culture that surrounds campus.

“We’ve been going back and forward texting and on Instagram for a bit. I know I’m going into an awesome environment,” said Moore, who reads the Bible every day. “The two-year mission is the ultimate sign of sacrifice. That builds a locker room; these dudes don’t mess around, because they have spent two years being a part of something bigger than themselves. That’s probably the biggest reason I committed to these dudes, to be honest with you.”

Originally from Orange County, California, Moore’s father played basketball at Point Loma and his mother swam for Pepperdine. Moore was a finalist for Tennessee Mr. Basketball as a junior in 2020-21, when he averaged 18.5 points and 8.0 rebounds en route to the Division II-A championship game.

But the family moved to Southern California before his senior season, where Moore enrolled at West’s tuition-free K-12 prep school launched last fall to rival powerhouse Sierra Canyon, home to a number of prep basketball stars including Lebron James’ son Bronny. Moore’s family originally hails from the Los Angeles area, including his mother who swam at Pepperdine.

At Donda Academy, West — who named the Adidas-backed school after his late mother — attracted the likes of Zion Cruz, Jahki Howard, Robert Dillingham and Jalen Hooks — top recruits in the Class of 2023. It may not have been picture-perfect like Beyonce, but the school drew some of the top prospects in the Class of 2022 and 2023 with offers from college basketball blue bloods like North Carolina, Florida, Florida State, Ohio State and Kansas, among others.

The program had homies, but in the end, it was still lonely.

“It’s just one of those things you can’t pass up,” Hooks told the Indianapolis Star last year. “It was more of a family decision, too. All of us just felt like it was a chance to reach my full potential and grow and get ready for the college level.”

Moore estimates he only saw West “about 8-10 times” during his year at Donda, but every interaction was positive. He also spent time taking advantage of some of the top competition on the west coast.

“I was so focused on basketball that it was kind of cool to just do stuff with Kanye,” Moore added. “But I was around NBA trainers; I worked with Jalen Green’s trainer for a whole year, and I worked out with Jaxon Kohler for a while.”

A lot of the players who hail from across the country had formed previously relationships, mostly through traveling summer tournaments and Instagram, according to thesource.com.

The school was even featured on the cover of SLAM Magazine in the fall, where Moore appears with his teammates — and a certain Yeezus.

“It’s crazy that he reached out,” one player at Donda told Yahoo Sports. “But he’s building a good team with players that I want to play with and it’s out in LA in a good market so it’s something me and my family have to think about.”