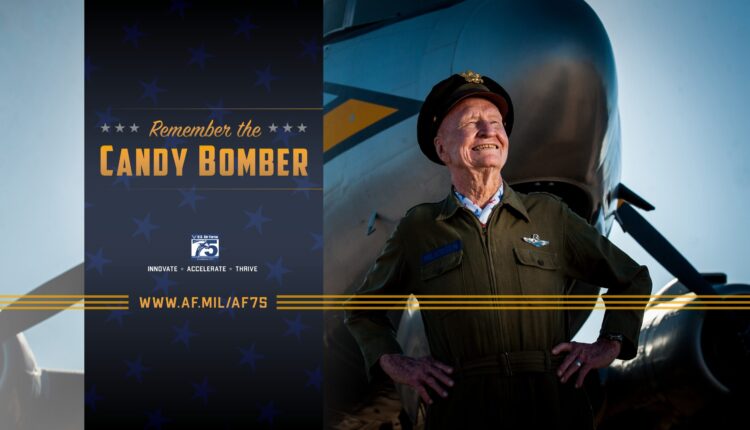 MAY 23, 2022 – Kicking off a two-day celebration honoring the life and legacy of Col. Gail Halvorsen, the “Candy Bomber,” the Air Mobility Command commander joined friends, family and guests in Provo, May 20, to dedicate a joint Base Charleston-based C-17 Globemaster III as the “Spirit of the Candy Bomber.”

Beloved by Germans and Americans alike, Halvorsen was known for dropping candy via mini-parachutes from his C-54 Skymaster to German children during the Berlin Airlift from 1948 to 1949. Halvorsen died Feb. 16, at the age of 101, after a lifetime of service and inspiring the generations that followed behind him.

Gen. Mike Minihan, AMC commander, reflected on Halvorsen’s act of kindness and how it inspired an AMC tradition of delivering hope…always.

“It’s an honor of a lifetime representing the men and women of the United States Air Force and the Air Mobility Command celebrating the distinguished life and service of an Air Force hero – Uncle Wiggly Wings, the Chocolate Pilot, the Candy Bomber,” Minihan said . “This C-17, the Spirit of the Candy Bomber, serves as a small token of our larger inheritance from Colonel Halvorsen and will transport Halvorsen’s example around the world, the standard bearer for the power of the humanitarian mission he began, and it will spread Halvorsen’s undying influence ensuring the spirit of the Candy Bomber will live on in the Mobility world, in the Air Force and in the American spirit forever.”

The event also served as an opportunity to celebrate a United States Air Force hero during the service’s 75th year. The Berlin Airlift, also known as Operation Vittles, was the first major operation the independent service participated in, delivering more than 2.3 million tons of food and fuel to Berlin. Operation Little Vittles, conceived and led by Halvorsen, also delivered 46,000 pounds of candy to children on the ground.

“He took the ultimate high ground in a year where we celebrate the 75th year of an independent Air Force that he helped shape from the very beginning,” Minihan said. “An Air Force based on the premise that air power is a force all its own and he brought that premise to life, setting the standard of humanitarian operations we measure ourselves against to this very day. He harnessed the best of the American spirit and shone a beacon of light into the darkness of despair behind the Iron Curtain. He showed us that doing the right things that can change the world and touched the lives of generations. He planted the seeds of friendship and alliance that continue to bear fruit today.”

The following day, the Spirit of the Candy Bomber joined a C-54 Skymaster, the Spirit of Freedom, as the celebration moved to Spanish Fork Airport in Provo. The event included STEM events for children, a preview of the future Gail S. Halvorsen Aviation Education Center and performances by the Band of the Golden West.

The Spirit of the Candy Bomber has provided aid and assistance for several humanitarian operations including the ongoing Ukraine Security Assistance missions, last year’s Afghanistan non-combatant evacuation, Hurricane Florence in 2018, Hurricane Matthew in 2016, and Operation United Assistance during the 2014 Ebola outbreak in West Africa.

Notably, during the Afghanistan NEO, The Spirit of the Candy Bomber flew 18 missions, including evacuating 232 US citizens, allied partners and Afghan civilians in the first 48 hours after Kabul fell to the Taliban in August 2021. The aircrew, who were recently awarded the Distinguished Flying Cross, was immediately forced to assess the heightened risk and adapt to updated orders to evacuate as many people as possible to safety.

“We saw the same great influence in the Afghanistan evacuation this last August, 124,000 Americans and Afghan partners, 17 days, one runway, all by air,” Minihan continued. “Airmen risked their safety making incredibly tough decisions on the fly to deliver new hope and a chance at the American dream for people they didn’t even know and for generations to come. Just like Colonel Halvorsen.”

Watch a special production of the event by the 2nd Audiovisual Squadron here.