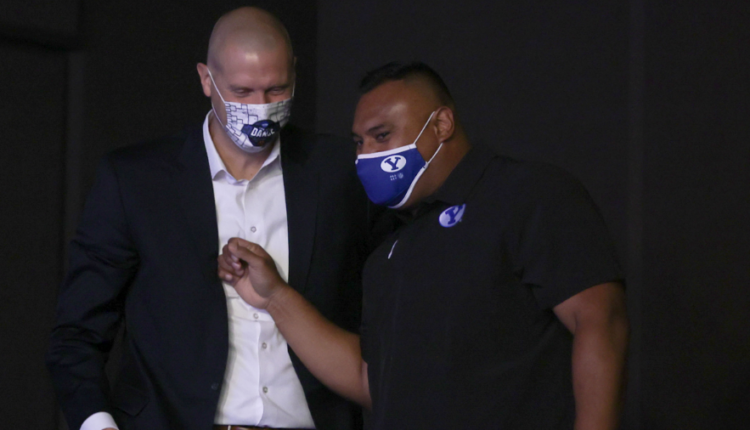 BYU basketball coach Mark Pope (left) and BYU soccer coach Kalani Sitake celebrate at a press conference that BYU has accepted an invitation to the Big 12 Conference at BYU in Provo on Friday, September 10, 2021. BYU will play all of the sports offered by the Big 12 except equestrian sports, rowing and wrestling. Men’s volleyball continues to be played in the Mountain Pacific Sports Federation as the Big 12 don’t offer the sport. (Laura Seitz, Desert News)

PROVO, Utah – You know you made it as the BYU head coach when you get a taste of ice cream from the BYU Creamery named in your honor.

The ice cream from Kalani Sitake is called “Kalani Sitake Road”. The sixth year coach said on a coaching show last year that he loves any ice cream with chocolate. Hence, it was only natural for BYU Creamery to opt for a flavor that includes chocolate ice cream with marshmallows, brownies, fudge, and pecan pralines.

Kalani Sitake Road and Popes Postgame Snack will go on sale in BYU Creamery on January 9, 2022.

BYU Creamery ice cream flavors for coaches over the years

Sitake and Pope join an exclusive club of BYU trainers for a taste of BYU Creamery ice cream. Others include the legendary soccer coach LaVell Edwards. Edwards’ taste is “LaVell’s Vanilla”.

Former football head coach Bronco Mendenhall once had a flavor called “Broncos Cocoa Bean”. But unlike the flavors mentioned above, this one is no longer available after leaving to take the Virginia job.

Mitch Harper is a BYU Insider for KSLsports.com and host of the Cougar Track Podcast (SUBSCRIBE) and Cougar Sports Saturday (Saturday, 12pm – 3pm) on KSL Newsradio. Follow him on Twitter: @Mitch_Harper.