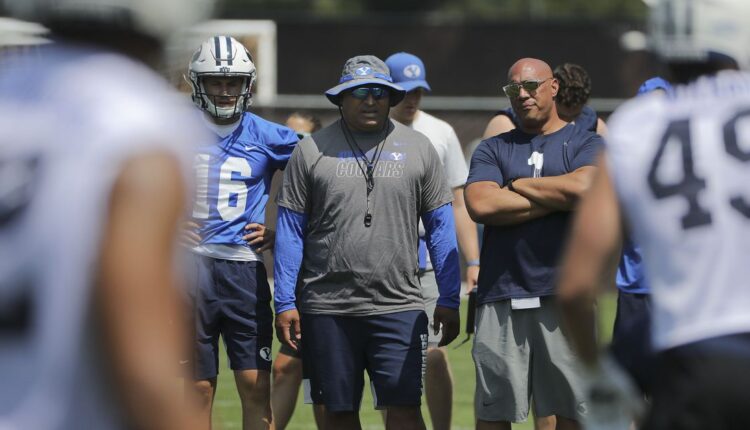 BYU football: Everything you need to know from the Cougar’s first week of camp

This article was first published as Cougar Insider Newsletter. Sign up to receive the newsletter in your inbox every Tuesday evening.

As expected, the first week of BYU’s soccer camp focused on the quarterback derby, with Jaren Hall, Baylor Romney and Jacob Conover sharing the reps equally. Everyone had their moments, good and bad.

Hall is a great athlete with a major league baseball arm and impressive speed. Romney has the fastest release and is smooth and calm. Conover has the rawest talent to play the position and was the best recruited when offensive coordinator Ty Detmer offered him a scholarship. Romney and Conover both looked productive in a brief team exercise Monday when Hall Malik Moore tried to intercept a TD pass on Issac Rex.

But first impressions outside the camp also focused on the depth of the receiving corps, where Senior Neil Pau’u with his persistence has become a major weapon. The offensive line under the new coach Darrell Funk also impressed with the size of the returned athletes and the way they deal with less experienced players. Observers have also been impressed with BYU’s secondary school, which has played many games to keep the QBs honest and humble. Cornerback Malik Moore was very impressive in secondary school.

Here is a list of some of our camp stories from the first week:

Here’s the question of the week: what are your predictions for one of the most important elements of the business? Offensive line of the soccer team / BYU?

Jay Drew: The prerequisites for another outstanding offensive line from BYU are in place, but I am not yet entirely convinced that this group will be as good as last year’s group. Tristen Hoge, Kieffer Longson, Chandon Herring and Brady Christensen in particular will be difficult to replace.

It appears the Cougars have six solid offensive linemen, but not much depth. Injuries aside, it will be above average, led, of course, by center James Empey and the towering tackles Harris LaChance and Blake Freeland.

There’s going to be quite a bit of pressure on this group because the Cougars are laden with offensive weapons that can’t do their thing if the block isn’t there. In my opinion, the jury isn’t finished with this group – the first three games should tell the story.

Dick Harmon: Jeff Grimes returned to Provo and built the foundation. He literally took what was there and put it on the BYU offensive. It was phenomenal to see him there for the second time. I think Darrell Funk will be a home run to replace Kalani Sitake. He has three decades of coaching under his belt, 10 of them as a coordinator. I like that Blake Freeland is a freak athlete and will replace the talented Brady Christensen. Like Freeland, Harris LaChance is huge at 6-foot-8,300 pounds. If they can move and protect, that’s a great foundation with James Empey at the center.

This unit looks confident, hungry and united, a great start for funk to keep going. The thing is, we’re going to find out how good this facility is quickly because the schedule for September is a refinery fire. The O-Line needs to operate at the mid-season level to give anyone who is the QB a chance to use the mounted weapons – and there are many.

Elijah Bryant was fortunate enough to win an NBA championship ring with the Milwaukee Bucks, and Jeff Call got the reactions of the former Cougars guard in that interview. Jeff also highlights the upcoming WCC basketball schedule in his article on the top league games between BYU, Gonzaga and Saint Mary’s.

A former BYU runner goes viral on TikTok after giving birth and breaking a record.

I’m becoming more and more optimistic about our orienteering and our offenses in general. I forgot how big our offensive line players are. Her footwork and overall technique have reportedly improved significantly over the past year. Although we lost a few orienteering starters, we essentially played a full schedule last season and everyone expected this year had quite a few reps in the game. Our orienteering should again be a strength rather than a relative weakness this year. Together with great talents at RB, WR and TE, if our QB game is appropriate at all, we should be good on the offensive. [Defense, as many have pointed out, remains a worry.]

If you’ve ever wondered why there are so many more BYU articles than Ute articles, there is no need to look beyond the following posts. So many clicks and comments from Utah fans … about the team they no longer care.

I hope it’s just been a bad day for Hall. If he can be an accurate passer, his legs will mean another runner for whom the opposing D must have a game plan. I wish Romney the best, but he just seems to me to be a game manager in the shape of so many Ute QBs over the years.

Whoever wins the starting job, I hope the downfield continues Production that we saw last year. As Steve Young has often said about Kalani’s misdemeanor, BYU must win or lose in BYU football. Throw the stone!

On this day: F2 tornado rips through Salt Lake City 22 years ago

Review: Historic Night of Art and Music will leave a lasting impression in Ogden | entertainment