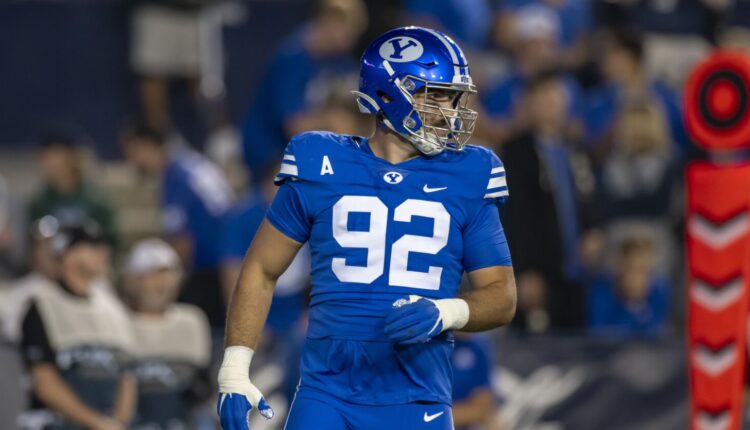 BYU football: For Tyler Batty and the Cougars, the time is now

Daylight saving time is 10 days away, but BYU can’t afford to wait that long. In a mad effort to save its season, the Cougars must turn back the clock right now and not just an hour, they need to turn it back to Sept. 10 when an aggressive, physical BYU team knocked off No. 9 Baylor in double overtime.

“We have seen better days, but honestly, in life and in this game, nothing comes easy. The struggles we are going through are going to help us. We are turning this around. It’s gonna stop right now.” — BYU defensive lineman Tyler Batty

Tyler Batty is ready to do it.

The 6-foot-5, 275-pound Payson, Utah farm boy, who already stands a head and shoulder above most of his teammates, is seeking a larger presence to keep his sophomore season from shrinking away.

“We have seen better days, but honestly, in life and in this game, nothing comes easy. The struggles we are going through are going to help us,” Batty said. “We are turning this around. It’s gonna stop right now.”

Batty and the defense have had a hard time stopping anything during BYU’s current three-game slide, especially on third downs, where Notre Dame, Arkansas and Liberty combined to convert a stunning 30 of 43 while amassing 121 points.

“It’s time to execute. When we get out there on the field the change has to be in the plays that we make,” he said.

Batty addressed the team earlier this week with a plea for individual accountability, starting with himself. “Making that tackle, making that sack, picking that ball off — doing everything that we can in our power to get off the field and get the ball back to the offense.”

The Cougars (4-4) face East Carolina (5-3) on Friday (6 pm, ESPN2) at LaVell Edwards Stadium. BYU may have won 14 straight night games at home, but the Cougars will need more than the positioning of the planet to win, and they need Batty and company to put pressure on the quarterback.

BYU sacked Baylor’s Blake Shapen four times on Sept. 10 and they have managed just four sacks since — in six games.

“I think we’ve just missed opportunities,” said Batty, who has 30 tackles and one sack. “Those opportunities to get into the backfield and bring the quarterback down are precious and you have to make the most of each one of them. We’ve got to be better.”

The sack deficiency is just the tip of the iceberg. BYU ranks near the bottom of college football when it comes to tackles for loss (124), first-down defense (127) and third-down defense (128).

Adding to the across-the-board woes, the Cougars offense isn’t doing much better, failing to score after the first quarter last week at Liberty. The flurry of three-and-outs by the BYU offense is directly linked to the lack of three-and-outs forced by the defense.

In some ways, time is on BYU’s side Friday night. They have the time zone in their favor. East Carolina is coming from the East Coast. The Cougars also have the time of year — it’s cold! The low temperatures Friday night are forecast in the upper 20s — a far cry from life in Greenville, North Carolina. BYU also has the time of the game in his favor. Since 2020, the Cougars are 19-0 in games that start at 6 pm or later (local time). Friday night’s game starts at 6 pm

In East Carolina’s favor, the Cougars have been playing poorly for what feels like a long time, but Batty says that is about to change. Stopping BYU’s skid means stopping the Pirates.

“We’ll do it by playing BYU defense — fast, physical, tough, getting takeaways, putting the quarterback on the ground, stopping the run game,” he said. “Playing the defense BYU fans know and love.”

For his part, Batty admits his faults and pledges to be better. He has seen enough and it’s driving him, well, batty. For the Cougars, better late than never is a real thing — and it’s getting late.

Daylight saving time can wait, this is the time for “season saving” and BYU hopes to turn back the clock on Friday night — all the way to Sept. 10 — when a much more confident team took the field.

Dave McCann is a contributor to the Deseret News and is the studio host for “BYU Sports Nation Game Day,” “The Post Game Show,” “After Further Review,” and play-by-play announcer for BYUtv. He is also co-host of “Y’s Guys” at ysguys.com.