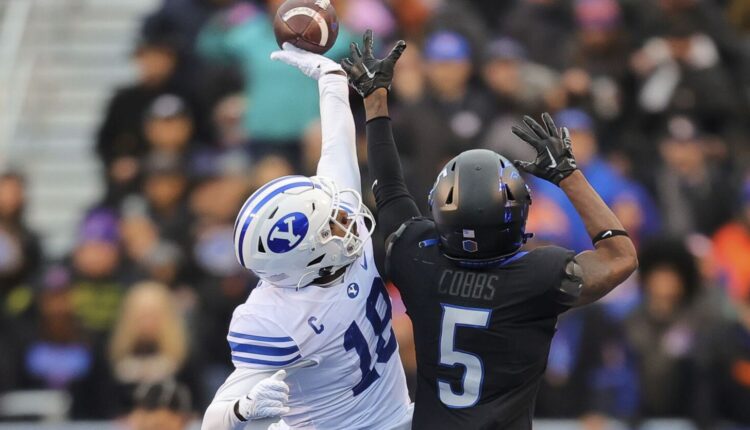 BYU football: This pair of departing cornerbacks will be greatly missed

The mainstays in BYU’s secondary the past two seasons — and even longer than that in the case of Mandell — will be honored Saturday on Senior Day at LaVell Edwards Stadium before playing in their final home games.

But Gilford will miss Mandell and Hayes just as much in his cornerbacks room.

“And then they are guys who have been through the program who didn’t get in trouble. They just showed the young guys the right way to do things, on and off the field.” — BYU cornerbacks coach Jernaro Gilford on Kaleb Hayes and D’Angelo Mandell

“I tell everybody all the time that we have the funniest room, and D-Lo is definitely a ringleader of that,” Gilford said Tuesday. “… And Kaleb is all about leadership, man. So I am definitely going to miss that part.”

Twenty-four other players who still have some eligibility remaining but have chosen to be honored in case they do move on will also be celebrated before the matchup with Utah Tech.

Gilford said Hayes and Mandell — who was known as D’Angelo Gunter when he entered the program in 2017 — have made “huge” contributions to the program and will be missed.

“They know everything I do as far as drills, what I want on the field,” Gilford said. “So they have been extensions of me on the field. It’s going to be sad to lose those guys.”

Hayes has held down the starting right corner spot most of the season, aside from missing the Wyoming game with concussion-like symptoms, while Mandell has rotated with Vanderbilt transfer Gabe Jeudy-Lally at the other corner spot.

BYU defensive back D’Angelo Mandell looks on during a game against Washington State, Saturday, Oct. 23, 2021, at Pullman, Wash.

Candidates to fill in next year include sophomore Jakob Robinson, juniors Jacob Boren and George Udo and junior college transfer Mory Bamba. But Saturday will be about honoring Mandell and Hayes, who transferred in from Oregon State before the 2021 season.

“Just having those guys has been a huge blessing,” Gilford said.

The former BYU corner whose last game at LES was that 3-0 loss to Utah in a blizzard in 2003 reflected on how Mandell left the team midway through fall camp in 2017, worked for nearly a year in the San Diego area as a busboy, shoe salesman and grocery store shelf-stocker, and was persuaded to return to Provo in 2018 by Gilford and safeties coach Ed Lamb.

“He works (hard), man,” Gilford said. “He’s a guy who works in the offseason. After practice, he works on his craft. He wants to be great, and that is something you can’t really teach.”

As for Hayes, who came to BYU with two years to play, Gilford said the Southern California native became an instant leader for the Cougars. Both players have already earned their college degrees.

“And then they are guys who have been through the program who didn’t get in trouble,” Gilford said. “They just showed the young guys the right way to do things, on and off the field.”

Hayes quickly developed into one of the best interviews on the team, and he didn’t disappoint Monday when he met with reporters via Zoom for perhaps the final time as a Cougar.

Hayes said looking back he wishes he had started his college career in Provo, rather that Corvallis, Oregon, and called it a “privilege” to play for coach Kalani Sitake’s program.

“This is the best two years of my college career, of my life,” he said. “Best decision I made. I just love these dudes, man.”

Judging by the way his teammates flock to him after big plays, the feeling appears mutual.