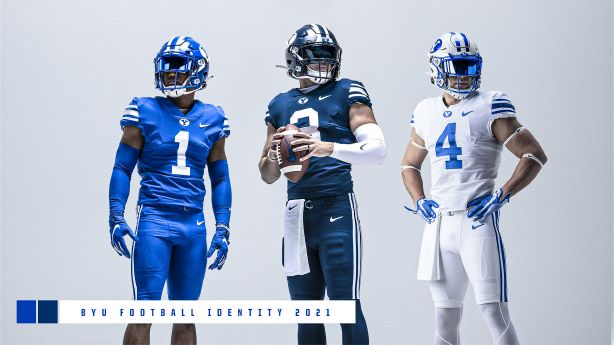 PROVO – BYU Football goes to the new school with a pair of new helmet designs for the 2021 season, with a hint of the old school.

On the first day of the football camp in the spring of the coming season, the Cougars unveiled two new helmets on Monday that will be launched during the 2021 season. A royal blue and navy blue look with white stripes in the same motif as the “classic” white helmet that has been BYU’s trademark for decades.

Specific dates and games of the new helmets have not been disclosed, but the two are inspired by unique helmet designs throughout the history of the Cougar program and were developed with players’ ideas and experiences in mind.

“BYU’s football tradition was built through decades of success from those wearing the Cougars uniform,” coach Kalani Sitake said in the announcement. “Our players, former players and Cougar Nation value this great tradition of BYU football. We want the helmet and various uniform combinations to honor those who created the program and inspire those who will continue it.”

As part of the announcement, the Cougars also released a full unified identity that includes style sheets for all-royal, all-navy, and all-white uniforms that will be used in the future. You can find the entire uniform style guide here.

The regal helmet was new to the modern BYU fan and was first introduced in 1969 when Tommy Hudspeth was head coach and a future legendary coach named LaVell Edwards was serving as defensive coordinator. Led by future NFL quarterback Virgil Carter, the Cougars made their royal helmet debut and a year later won the 1965 Western Athletic Conference Championship – their first conference title in program history – which included victories over Arizona, Arizona State and Utah.

BYU went on with lots of whites and a primary royal blue ensemble for decades, including during Ty Deter’s Heisman Trophy run in the early 1990s, which helped establish the school’s national footprint.

The Cougars returned mainly to the white, double-stripe design helmet in 1969, with the now iconic look becoming the main helmet until a naval helmet was introduced in 1999. The school’s partnership with Nike ushered in a brand new style for BYU that year, including new logos, colors and uniforms, the navy jersey was brought back for the first time since the 1950s, which Sitake did during his career as a defender and Doak, among others Walker Prize winner Luke Staley wore.

Bronco Mendenhall revived the white helmet in 2005, making it the main cover of BYU, while bringing back the traditional jerseys from Edwards’ tenure. By the 2020 season, which ended 11: 1 and number 11, the Cougars had 10 different looks nationally ranked, the program’s highest in 24 years.

As part of a uniform brand initiative to strengthen the player and fan experience, @BYUfootball will be adding both a royal and a navy blue helmet to its existing uniform range in 2021.

That leads the Cougars to today’s announcement, spearheaded by Sitake, individual players, creative director Dave Broberg and equipment manager Billy Nixon, among others.

“Involving our student athletes last season in deciding which uniforms to wear has not only increased their participation on the team but also increased their sense of responsibility for their program,” said Nixon. “It was fun for the players to see how the creative process resulted in an enhanced experience for both the team and the fans. Their involvement in the process helped us develop additional uniform combinations and the spirit of oneness throughout the strengthen the entire program. “

BYU will open the 2021 season on Saturday, September 4th against Arizona at Allegiant Stadium in Las Vegas. The Cougars play a regular season of 12 games, including rivalries against Utah, Utah State, and Boise State. Power Five opponents Arizona State, Baylor, Washington State, and USC; a visit from former coach to Mendenhall and Virginia on October 30; as well as South Florida, Idaho State, and Georgia Southern.

Also on Monday, BYU announced a future football series with Ole Miss from the SEC and formalized the first matchup with the new FCS program Dixie State.

The Cougars have agreed on a home-and-home series with the rebels starting September 16, 2028 in Provo, followed by a return trip to Oxford, Mississippi on September 8, 2029.

The three-time national champions Rebels only faced BYU once in program history when the Cougars escaped with a 14:13 win from Vaught Hemingway Stadium in 2011, the Cougars’ debut season as an independent FBS. Kyle Van Noy scored the touchdown with a strip sack in the fourth quarter of the first defense game.

The Cougars and Trailblazers will meet on November 16, 2024 in the first matchup of the in-state series. Dixie State, who currently competes as an independent FCS player and knocked off Tarleton State No. 22 on his Division I debut on Saturday, will join the WAC by then.

The Trailblazers are the 10th team on BYU’s 2024 schedule, which also includes UCF, Utah, Hawaii, Wyoming, the state of Utah, Georgia Southern, East Carolina, UNLV, and the state of North Carolina.