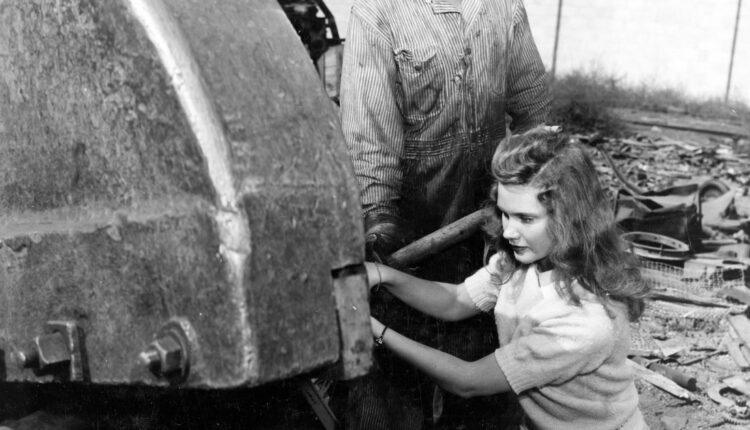 Aubrey Glazier wanted to understand what everyday life was like for the Utahner during World War II, so as part of her research asked someone who had experienced it: her grandma.

Rowena Glazier told her granddaughter that when women had to ration their silk and nylon stockings – because the material was needed for military parachutes – some “painted their legs to look like they were wearing nylon stockings.”

“They even took an eyebrow pencil and drew a ‘seam’ on the back to make the effect even more convincing,” writes Aubrey Glazier of the Utah Minute Women who organized aid during the war in an article for the Intermountain Histories project, when she was a student at Brigham Young University.

Brenden Rensink, who teaches history and is the associate director of BYU’s Charles Redd Center for Western Studies, launched Intermountain Histories in 2017 to help people learn and explore lesser-known history of Intermountain West. There are now over 400 stories on the project’s website and in the free app – more are in the pipeline.

“I hope people realize that there are all kinds of rich historical tales and stories in their own backyard that they have simply never heard of,” says Rensink, or “that they have heard a little about. but they haven’t really dug much. “

By making these stories accessible, Rensink says his goal is to “arouse curiosity.”

Take his daughter’s Orem school, for example. Rensink told her, “Oh, you have to tell your history teacher” that Canyon View Junior High School is near the site of a former WWII labor camp.

After the bombing of Pearl Harbor in 1941, Japanese Americans were forced to live in prison camps across the United States, including the Topaz Relocation Center near Delta. Some of them worked in a labor camp at 950 N. 800 East in Orem, harvesting grain in the orchards, according to an article by Intermountain Histories.

In a nearby Provo camp, “anti-Japanese feelings … among many Utah residents” became violent. On October 3, 1943, five white youth armed with shotguns and rifles gathered “and opened fire on Provo labor camp and local Japanese homes,” the article reads. While “no one was seriously injured,” the authors write, “the attack was on the third of the week.”

“The War Relocation Board threatened to remove the factories and their much-needed workers if the residents of Provo couldn’t tolerate and protect Japanese workers,” the story said. “The residents chose to protect the workers and keep their jobs,” and “the five youths were later arrested for attacking them.”

Today there is a plaque near Canyon View Junior High that “commemorates Japanese workers and their contribution to agricultural efforts during World War II,” the article says.

“We drive past historical sites with our cars all the time without even realizing it,” says Rensink. “… I kind of hope that the app will help people reconnect with all of the history that surrounds us, but that we generally just ignore it or are too busy to pay attention to it.”

Short in words, long in interest

The stories on Intermountain Histories are written by students at universities across the region and cover subjects in Utah, Idaho, Wyoming, Montana, Nevada, Colorado, Arizona, and New Mexico.

While students are fairly free to write about what interests them, Rensink tries to steer them into empty areas of the map and “to stories that haven’t been told ad nauseam, a million times”.

The stories are grouped into “tours” by topic. In addition to her series about life in Utah during World War II, Aubrey Glazier, now a social studies teacher for the Canyons School District, reports on the desegregation of Lagoon Amusement Park in the 1940s.

Other tours include, for example, the displacement of Native Americans from national parks, environmental tragedies across the west, female homesteaders, nuclear history in the west, and “Utah’s Forgotten Immigrant Communities.”

(Library of Congress) Members of the 11th AB Division kneel on the ground as they watch the 1951 nuclear test at Frenchman Flat, Nevada. The Intermountain Histories project tells of the nuclear weapons tests in the West.

Each piece consists of around 300 to 500 words, which Rensink says can be difficult.

“It’s really hard to write something that Grandma would find interesting,” he adds, “but also that a history buff or researcher wouldn’t find oversimplified.”

It was a fun challenge for Glazier.

“A lot of the research I did in college no one will ever want to read,” laughs Glazier. These were written for a professor for a grade.

But at Intermountain Histories “I can find topics that I thought people would actually be interested in and that were relatable to me and close to my home.”

Reading the website, Glazier says, “I learned so much that I didn’t know where I had lived all my life.”

Each story has photos and a bibliography, says Rensink, so people can “dig a little further”.

(Charles A. Libby, Jr. | Northwest Museum of Arts and Culture) Salish men stand by teepees on the Flathead reservation in Montana in 1903. A series of stories published as part of the Intermountain Histories project examines the history of the displacement of Native Americans from countries to create national parks.

Many historical societies and libraries make historical documents more accessible by publishing them online, Rensink said. Or, he says, Utahners could go to the library’s special collections at the University of Utah, fill out an inquiry form, and read diaries and letters themselves.

“I don’t know if the public realizes,” remarks Rensink, “that these primary documents, those old, dusty documents, are carefully kept and locked away so that they can remain open to the public and” go see them and learn from them. “

As for Intermountain Histories, Rensink envisions that the project could “last indefinitely”.