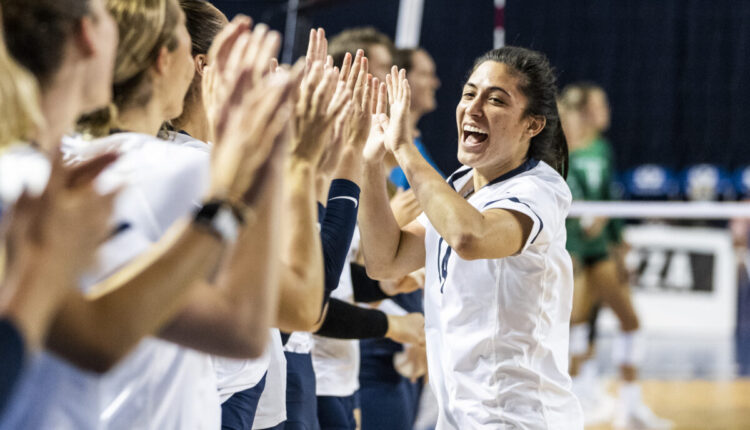 BYU’s Aria McComber (right) greets her teammates before the start of a women’s college volleyball match against Utah Valley on Saturday, Sept. 17, 2022.

Coming off of a pair of in-state wins, no. 16 BYU women’s volleyball continues its home stand, opening up its final season of West Coast Conference (WCC) play with Loyola Marymount.

Despite two wins last week, the Cougars dropped a spot in this week’s American Volleyball Coaches Association (AVCA) poll. BYU has been ranked in the top-17 for 131-straight polls. Two other WCC teams are also ranked: San Diego at No. 4 and Pepperdine at No. 17

Following last weekend’s sweep of Utah Valley, the Cougars are 6-1 at home this season. Head coach Heather Olmstead is 12-2 against Loyola Marymount, including 8-0 in Provo.

Junior outside hitter Erin Livingston continues to lead the team with 138 kills. Livingston is averaging 4.06 kills a set, good for No. 38 in the country.

Dishing out 10 assists per set, senior setter Whitney Bower has tallied 340 assists. Her average puts her at No. 56 in the nation.

Recording 37 total blocks each are senior middle blockers Heather Gneiting and Whitney Llarenas. The pair have also combined for 161 kills.

The Cougars will welcome No. 17 Pepperdine to the Smith Fieldhouse following their match with Loyola Marymount. Scheduled for 1 pm MDT on Saturday, Sept. 24, the match will be televised on BYUtv and streamed on BYUtv app.

No. 4/No. 7 BYU men’s and women’s cross country faces its first major test of the season at the Cowboy Jamboree in Stillwater, Oklahoma on Saturday.

The Cowboy Jamboree provides both teams an opportunity to showcase their strengths against some of the premier programs in the country.

No. 4 BYU men’s cross country will face 15 of the teams ranked in the USTFCCCA’s latest top-30 poll, including No. 1 Northern Arizona, no. 2 Oklahoma State, no. 3 Stanford and No. 5 Colorado.

No. 7 BYU women’s cross country takes-on 10 ranked opponents, including no. 3 Oklahoma State, no. 3 (tied) Colorado, no. 5 Stanford and No. 6Washington.

The Cougars have enjoyed recent historic success at Stillwater.

Aubrey Frentheway, McKenna Lee-Hansen and Lexy Halladay-Lowry return to the course where they helped BYU women’s cross country claim its fifth national title on March 15, 2021. Later that day, the BYU men would finish seventh as Conner Mantz raced to the first of two individual national championships. Casey Clinger took 13th at the 2020-21 nationals with a time of 30:19.8.

Head coach Dave Porter has added two players to the BYU men’s tennis roster ahead of the 2022-23 season. Brian Chen joins the team as a class of 2022 recruit from Taipei Municipal Jianguo High School. Five-star class of 2020 member Redd Owen is also set for his first season with the team after recently returning from serving a full-time mission for The Church of Jesus Christ of Latter-day Saints in West Virginia and Benin.

Chen joins the Cougars from Changhua, Taiwan, where he was coached by Wei-Yu Su, who played for Coach Porter at BYU-Hawaii from 1995-99. Chen was the top-ranked player in Taiwan for his age group when he was 14.

“We’re thrilled to have Brian Chen join us this fall. He came this summer to get an academic acclamation to the campus and he’s been working hard,” Porter said. “His family focused him on academics during high school, but now he’s getting back towards doing both tennis and academics and is playing better and better tennis each week.”

“BYU was my main goal all along,” Chen said. “The school has a good academic program and tennis team. BYU also has amazing coaches and teammates that I am excited to play with.”

Owen prepped at Brighton High School and committed to BYU in March 2019. A native of Sandy, Utah, Owen was the No. 24 recruit nationally and the top-ranked athlete in both the mountain region and the state of Utah. He won three state championships and was a contender for a fourth his senior year before the tournament was canceled due to the COVID-19 pandemic.

“Redd is a terrific player and has a fabulous attitude. We’re thrilled to have him back and with us. He looks very good in the early fall,” Porter added.

With the additions of Chen and Owen, the team’s roster is set at nine players entering the fall invitational portion of the 2022-23 season. The schedule begins on Sep. 23 with day one of the ITA Bedford Cup in the Mountains in Colorado Springs, Colorado. Chen and Owen will both be making their BYU debuts at the event.