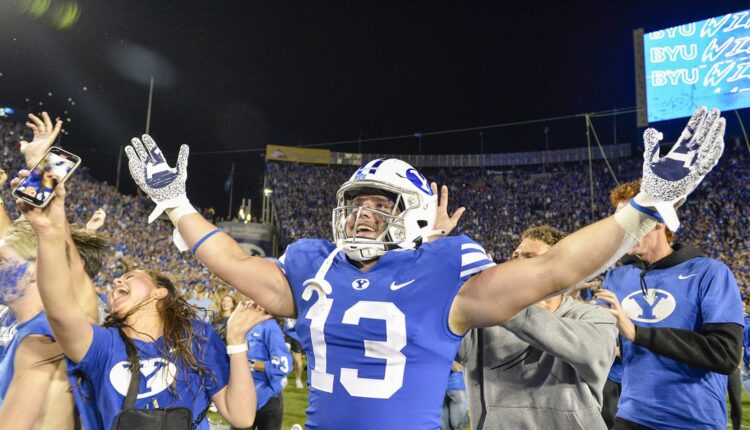 Provo • There was magic in the air around LaVell Edwards Stadium.

The anticipation of the BYU-Utah rivalry game was palpable as fans filled the stadium for the first time since the end of the 2019 season.

And if it felt like anything was possible, maybe it was.

The Cougars battled for a 26-17 win over the number 21 in Utah, a win that earned the Utes a nine-game losing streak spanning the past 12 years for BYU.

“The fan base was very urgent,” said BYU coach Kalani Sitake. “It was nice to get the win for the fans and for our players. I’m just really proud of her. It was a great night. It was a good game. We were on the other side of these games. We are very happy and happy that we got the win. “

State rivals aren’t set to meet again until 2024, so the Utes will have to sit on the loss for a few years before attempting to turn the tide again.

“It’s a tough question, it really is,” said Utes, who ran back, Micah Bernard. “… We had a good run. We won’t see these guys for a couple of years so it was hard to end here. “

The Cougars fed on the crowd and set the tone early, forcing turnovers on the first two drives of the Utes of the game. The first was an interception from Chaz Ah You and the second from a forced fumble salvaged by Isaiah Herron.

Both occurred within the first eight minutes of the game.

Although BYU struggled a little in the subsequent drive, the Cougars were able to convert the second turnover into the first points of the game with a 37-yard field goal from Jake Oldroyd.

BYU were in the lead 10-0 before losing momentum due to their own mistakes. A late hit from Keenan Pili got the Utes to score their first touchdown of the game, but the Cougars recovered and scored a last-minute score before half-time.

Utah made things interesting in the fourth quarter when the Utes scored 10 points on consecutive drives, but BYU found a way to score on a field goal.

It took the Utes more than one touchdown to either send them into overtime or to win.

“It was an exchange of blows – that’s the best way to describe it,” said Sitake. “We just finished the game.”

In the quarterback fight, Jaren Hall finished the night 149 passing yards and three touchdowns on 18 of 30 passes while standing upright and without throwing a pick. Hall also added 92 rushing yards on eight carries.

Across the field, Charlie Brewer threw 147 yards and a touchdown on 15 of 26 passes, but was picked once and fired twice.

At the end of the night BYU took control of the ball. The last time the Cougars beat the Utes in the sales battle was when BYU took their last win in the series in 2009.

“Control the line of scrimmage – this is our MO, we can do it best,” said Utah coach Kyle Whittingham. “And we gave up maybe 250 yards in a rush, couldn’t get a sack – got no sacks and no takeaways on defense, which is not a good recipe for success.”

The Utes gave up a total of 368 yards – 219 of which came from the Cougars’ running game. Utah also failed to make critical stops, allowing BYU to convert on 11 of 19 third downs and 1 of 1 fourth downs.

By comparison, BYU gave up 340 yards (174 through the air and 193 on the ground) and only allowed the Utes to convert 2 out of 9 third down conversions. The Utes couldn’t play down in either of their two quarters.

“We studied everything we saw,” said Ute’s linebacker Devin Lloyd. “On the defensive we felt very well prepared – we just didn’t implement it. … We simply did not convert in critical situations. “