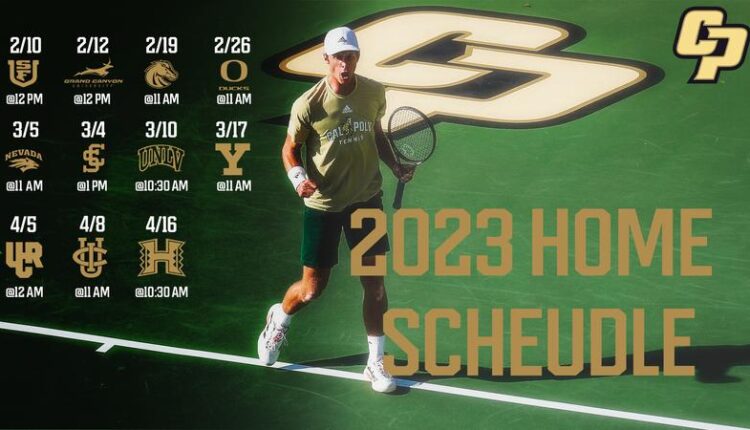 The 21 match schedule features 15 non-conference matches and six conference matches. Seven of those matches are against teams who finished last season ranked among the top-75 teams in the country. The Mustangs ended last year ranked No. 63

After winning a share of the Big West regular season title for the second straight season, Cal Poly will play its first four matches of the season on the road. The Mustangs will kick off the 2023 campaign in Ann Arbor, Mich. as part of the ITA Kick-Off Weekend where they will open the season against the University of Michigan, who finished last season ranked No. 8 in the nation. They will then take on either Northwestern or Arkansas, both of whom were top-50 teams last season, the next day depending on if the outcome against Michigan.

The Mustangs wrap up the season opening road trip with a trip to Utah to face BYU in Provo Feb. 3 before traveling to Salt Lake City Feb. 5 to play the University of Utah, ranked No. 32 in the final rankings of last season.

They then begin a stretch of eight straight home matches at Mustang Tennis Complex starting with the home opener Feb. 10 against University of San Francisco. During that stretch, they will also host Grand Canyon, Boise State, Oregon, Santa Clara, Santa Clara, Nevada, UNLV, and Yale.

Cal Poly will head to Houston, Texas to face Rice University and William and Mary before going to Stockton to play Pacific for the final non-conference match of the season.

The Mustangs begin Big West play March 31 on the road at UC Davis. They then start a three-match homestand in which they host UC Riverside, 2022 Big West champion UC Irvine, and Hawai’i.

They wrap up the regular season on the road at UC San Diego April 21 and at rival UCSB April 23. The Gauchos split the 2022 Big West regular season title with the Mustangs.

The Big West Championships will take place April 27-30 in San Diego where the Mustangs will look to win their third postseason title.