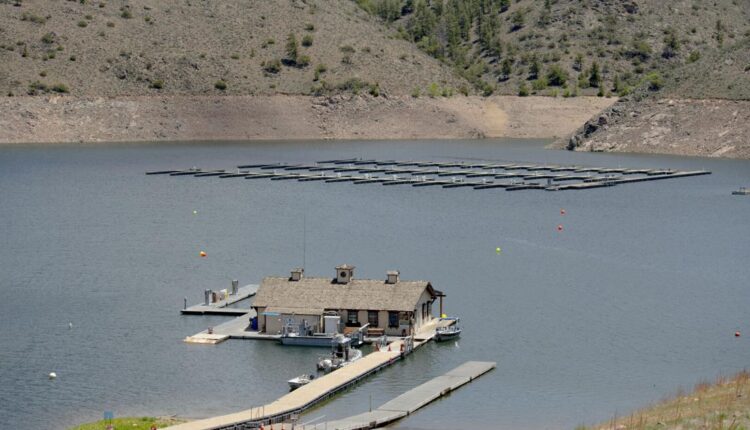 A long-serving staffer of the California State Water Resources Board has resigned his post, but not before noting the “dark and uncertain times” ahead as states, including Colorado, grapple with dramatically dwindling water supply from the Colorado River.

The resignation letter from Max Gomberg, an environmental program manager who managed the climate and conservation unit at the Office of Research, Planning and Performance and who had been with the agency since January 2012, sharply points to similar problems in the six other basin states that rely on the Colorado River to quench the thirst of their residents and industries.

Notably, Gomberg blamed California Gov. Gavin Newsom and board members for their reluctance to embrace what he considers to be necessary action to confront the West’s water and climate crisis.

Indeed, Gomberg’s remarks on conservation and his state’s reluctance to take action reinforce the magnitude of problems facing the seven states of the Colorado River as they try to meet a mid-August requirement to come up with a plan to conserve 2 to 4 million acres- feet of water in the coming year. That requirement was announced by Bureau of Reclamation Commissioner Camille Touton in a June 14 hearing with the US Senate Committee on Energy and Natural Resources. Touton said if the seven states, which include California, Colorado and Arizona, did not come up with a plan, the bureau would do everything to “protect the system,” which likely means the federal government would impose its own solutions on the states.

Touton’s announcement caught some by surprise, and the basin states, which otherwise had cooperated in the past in taking significant and often painful actions to conserver water, appear less inclined to play nice this time around.

In an interview with the Los Angeles Times, Gomberg said he encountered resistance to numerous proposals, such as ways to bolster water conservation, as well as new water agency permit requirements on climate preparedness and climate requirements to “strengthen water regulation and management.”

Gomberg also said California has been too slow and cautious in adopting conservation measures, failed to revamp what he deems to be an excessive two-decade timeframe on groundwater regulation, and supported the “perpetuation of status-quo power structures,” arguing that local groundwater Agencies are dominated by irrigation districts and agricultural interests, according to the Los Angeles Times. He also accused Newsom’s administration of failing to address inequities in the water rights system.

“The people in charge of those agencies have the least incentive to move quickly,” Gomberg reportedly said. “They fully intend to run out the clock and fight any state attempt to come in and get into their business.”

In a statement to Colorado Politics, Joaquin Esquivel, chair of the California State Water Resources Control Board, defended the state’s decisions in managing water.

“Every day, the State Water Board makes tough decisions to protect and manage California’s limited water resources by listening to the perspectives and needs of the state’s diverse stakeholder communities,” Esquivel said. “Over the past year, the board has taken unprecedented, bold, real-time regulatory actions in response to the state’s drought emergency, including implementing the broadest water rights curtailments in history; has voted to pass one of the strongest anti-racism state resolutions ever adopted; and, has begun implementation of the Bay-Delta plan for the lower San Joaquin River Bay-Delta.”

Esquivel added: “At the same time, the Newsom administration continues to add capacity to the board’s work through massive state budget investments that support drought resilience and response and investments to water systems to make the state more climate resilient.”

The challenges Gomberg highlighted are playing out across the West.

On July 18, the four upper basin states – Colorado, Wyoming, Utah and New Mexico – sent a letter to the federal Bureau of Reclamation with a five-point plan for addressing dwindling water levels.

At the same time, Colorado said it had already done its part to conserve and that it is now up to the lower basin states – Nevada, Arizona and Southern California – to come up with the water needed to preserve hydropower at both the Glen Canyon dam , on Lake Powell, and Hoover dam, on Lake Mead. But even the combined annual water allocation of the lower basin states won’t be sufficient to allow them to forego 4 million acre feet of water.

“I think that at this point, we stand ready to hear what the Lower Basin has in mind,” said Amy Ostdiek, a section chief with the Colorado Water Conservation Board.

Ostdiek, who is head of the Interstate, Federal, and Water Information Section, told The Gazette in early July the Upper Basin states already dramatically reduced their water use in 2021 because of drought conditions. Specifically, they cut 1 million acre-feet in use in 2021 compared with 2020, bringing it down to 3.5 million acre-feet, she said.

But, Ostdiek maintained, total water use in the Lower Basin has not been cut enough to preserve levels in the lakes at the same time.

That 1 million acre-foot savings claim is now being challenged.

Three water experts — John Fleck of the University of New Mexico; Eric Kuhn, formerly the executive director of the Colorado River Conservation District; and, Jack Schmidt of Utah State — recently crunched some of the data, and concluded that claim is dubious.

The trio recently wrote that “as stakeholders negotiate the current crisis on the Colorado River, we believe the representatives of the states of the Upper Basin – our states – are making a dangerous argument.”

That argument is simple, they said.

“The Upper Basin states argue that their part of the watershed already routinely suffers water supply shortages in dry years. Without the luxury of large reservoir storage along the rim of the watershed that might store excess runoff in wet years and supplement supplies in dry years, the argument goes, the Upper Basin is limited by the actual mountain snowpack in any given year,” they said, adding what that means – allegedly – is using less water.

But that argument is not backed by the Bureau of Reclamation’s Consumptive Uses and Losses reports, they wrote. In fact, in dry years, the Upper Basin states actually use more water than in wet years, based on the data, and much of that additional use is in agriculture.

They warned that Lower Basin interests are perfectly capable of doing the same math.

The Colorado River Compact of 1922 optimistically forecast 15 million acre-feet of water would be available annually, divided equally between the upper and lower basin states. But drought and climate change has now reduced that flow to 12.3 million acre-feet annually during the past 20 years.

The seven states have largely worked collaboratively in the past decade, coming up with a drought contingency plan in 2019, for example.

Late last year, that plan resulted in draw-downs of water from the Aspinall Unit at Blue Mesa Reservoir in Gunnison County, Navajo Reservoir in southwestern Colorado and the Flaming Gorge Reservoir in Utah in order to keep Lake Powell’s water levels high enough to generate hydropower. It hasn’t been enough. Lake Powell now sits at just 48 feet above its most dangerous point, where it would be forced to shut down its hydropower, which could take place as soon as 2024. Hence the requirement for massive conservation — and the fear of cuts in water availability all over the Southwest.

Water experts, such as Kuhn, now question whether that spirit of cooperation, which began with the 1922 compact and has kept the seven states at the negotiating table for 100 years, will hold as states face the deadline outlined by Touton, as well as negotiations over river guidelines that are due to expire in 2026.

Kuhn had suggested during a June 16 conference that the compact is based on a river that “no longer exists.”

At the conference, Tanya Trujillo, the Assistant Secretary for Water and Science at the Department of Interior, said the department doesn’t have a recipe for how to come up with the 2 to 4 million acre-feet.

“We’re going to have to be very creative in developing a large list of potential options,” Trujillo said. “We’re going to be doing things we’ve never done before.”

When the University of New Mexico’s Fleck asked if the notion of collaborative governance on the river was oversold, Trujillo replied, “I don’t know that we can blame the current governance process for the current hydrology.”

She added: “I don’t want us to be in a chaos category.”

Editor’s note: The original version of this article erroneously stated that Max Gomberg served on the California State Water Resources Board. In fact, Mr. Gomberg was an environmental program manager who managed the climate and conservation unit in one of the agency’s offices. This story has also been updated with comments from Joaquin Esquivel, chair of the California State Water Resources Control Board.