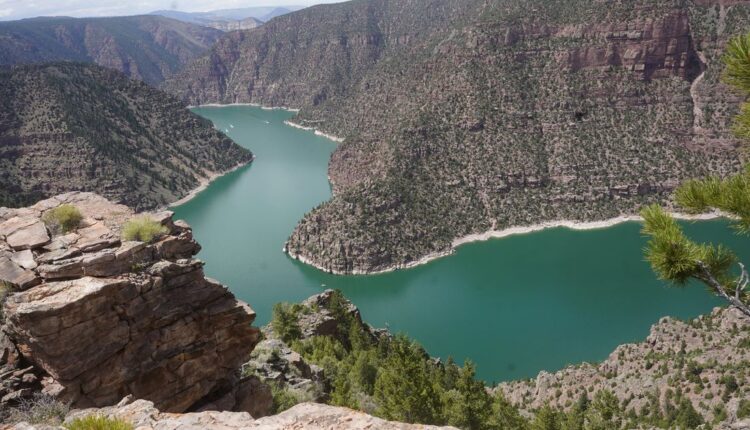 Can mountain lakes be our batteries?

This story is part of The Salt Lake Tribune’s ongoing commitment to identify solutions to Utah’s biggest challenges through the work of the Innovation Lab.

That is the essence of pumped hydro storage, which is poised to be a significant player in Utah’s move toward sustainable renewable energy.

Hydroelectric power was the country’s largest source of clean energy when the turbines were turned on at Hoover Dam (then Boulder Dam) in the 1930s.

But hydropower depends on the clouds to feed the reservoirs behind hydroelectric dams, and that is getting harder in the drought-stricken West.

But it doesn’t work everywhere. A good pumped storage project needs a big vertical drop – 1,500 feet or more – between the upper and lower reservoirs.

“Here in the West, we fortunately have access to some good prospects,” said Matthew Shapiro, CEO of Salt Lake City-based rPlus Hydro, which has 10 pumped storage projects planned across the western United States.

There are 26 pumped hydro storage projects in the United States licensed by the Federal Energy Regulatory Commission (FERC), but none are in Utah … yet. Two Utah projects have received preliminary permits from FERC, and four others have applied for permits.

The permits are a first step. They let developers reserve a potential storage site while they do all the engineering and hydrology work to determine if it really is a viable project, said Celeste Miller, spokesperson for FERC.

“You cannot build. You cannot turn any ground” with a preliminary permit, Miller said. That requires a full license.

Four of those Utah projects are coming from PacifiCorp, parent company of Rocky Mountain Power, Utah’s largest electrical utility. The company also has another project just over the state line in Idaho near Bear Lake. In its 2021 Integrated Resource Plan, the company anticipates adding 500 megawatts of pumped hydro storage across PacifiCorp’s six-state footprint over the next 20 years. That plan also includes even more gigawatts of battery storage.

The utility aims to get 8 hours of power from the hydro projects each day. For a 500-megawatt project, that is enough to power about 350,000 Utah households for those eight hours.

“As we do our long range plan, it’s been pretty clear with the amount of wind and solar that is being selected that energy storage is going to be a significant part of our resource mix,” said PacifiCorp spokesperson David Eskelsen.

That coming demand also is attracting independent players who want to set up pumped storage projects to sell electricity to the utilities. But with a lengthy permitting process that puts most projects out at least 10 years, it’s not an investment for the short horizons of publicly traded companies or private equity firms.

“Private equity is not the kind of capital we want behind us,” said Luigi Resta, president of rPlus Hydro. “You have to be committed for 40 years.”

Resta and Shapiro found that commitment in the Gardner Group, the Salt Lake City real estate development company started by Kem Gardner that has branched out into renewable energy. “They have the complete opposite view” from private equity, Resta said.

The rPlus project that is closest to reality is the White Pine pumped storage facility north of Ely, Nev. It is scheduled to begin operation by 2030. The company has an active permit and is completing the studies required for full licensing.

The project requires construction of both the upper and lower reservoirs, and they will be separated by 2,200 feet of elevation, which Resta said is about the maximum for a pumped storage project. More elevation puts too much pressure on the system. An efficient pumped hydro project can return up to 80 percent of the energy it takes to pump the water up, he said.

If approved for licensing, the White Pine project would include a vertical shaft below the upper reservoir that would feed a pump/generator station deep inside the mountain. The straight vertical drop can produce more power than a pipeline running down the surface of the mountain, but it requires tunneling underground. One advantage of the Nevada site is that Ely has been a center of hard rock mining for more than a century, so there is local expertise.

Pumped storage has some important advantages. One is that it can be standby power for when renewables aren’t producing. The turbines can go from zero to full output in about 60 to 90 seconds, Shapiro said. That’s faster than even natural gas turbines, which take about five minutes to power up. That quick turnaround is something large coal-fired power plants can’t do, which makes it harder to use coal as an intermittent source.

Another positive for pumped storage is that it doesn’t lose its effectiveness over time like batteries. “Pumped storage has a lifetime of 100 years,” Shapiro said.

Like their hydroelectric cousins, pumped storage projects must face the reality of a drying climate. They recirculate the water between the two reservoirs, but they still lose about 10 percent of the water annually to evaporation. As a result, securing water rights is a key challenge.

As part of the FERC process, other entities are invited to comment on permit applications. In several cases, concerns have been raised by neighboring water suppliers.

“The district asks that, even before a preliminary permit is issued, a careful study of what, if any, water is available for this project,” said the Emery Water District in its comments on the Electric Lake application.

And several environmental groups are challenging a pumped-storage project on Navajo Nation land that would use Lake Powell as the lower reservoir. “It’s trying to build billions of dollars worth of the infrastructure in this lake and in the system that is clearly in severe decline,” Gary Wolkner, executive director of Save the Colorado, told Public News Service.