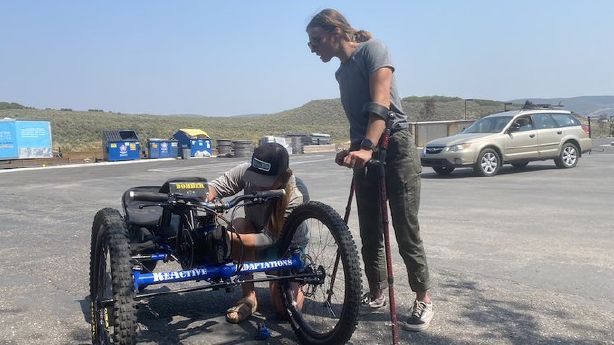 Maggie Gettys, right, was reunited with her adaptive bike on Sunday after it was stolen from her car on Saturday thanks to help from social media and community members. (Jeffrey Dahdah, KSL-TV)

SALT LAKE CITY – A thief stole a custom bike from a disabled woman in Salt Lake City over the weekend.

Bike owner Maggie Gettys said the bike was locked on the luggage rack on her Subaru Saturday when she walked into a climbing gym at 1470 South and 400 West.

When she came out, she noticed that the lock was stuck and the bike was gone. “My mind was spinning with all sorts of scenarios like, ‘How do you know how to do it?’ and ‘Who would need it?’ “said Gettys.

The bike is an adaptable, bespoke bike made specifically for Gettys. It’s worth $ 12,000, but it’s not easy to sell.

The National Ability Center posted the bike theft on Instagram in an attempt to find the thief. “It went on the Internet like nothing I’ve ever seen,” said Steph Meyer with the center. “We had support from everyone from coast to coast, north to south. A lot of people were angry just because it’s a piece of adaptive gear and it feels a little hurtful to have your bike stolen.”

Gettys said the climbing gym owner took it upon himself to search the area and find the bike.

“I know he’d walk around the street for hours asking people and putting so much effort and time into finding my bike. I can’t believe someone who doesn’t even know me would do something like this, ”Gettys said.

The climbing hall owner returned the bike to Gettys on Sunday.

After a few adjustments, it was functional again.

The Smithsonian touring exhibit is coming to Sweetwater County