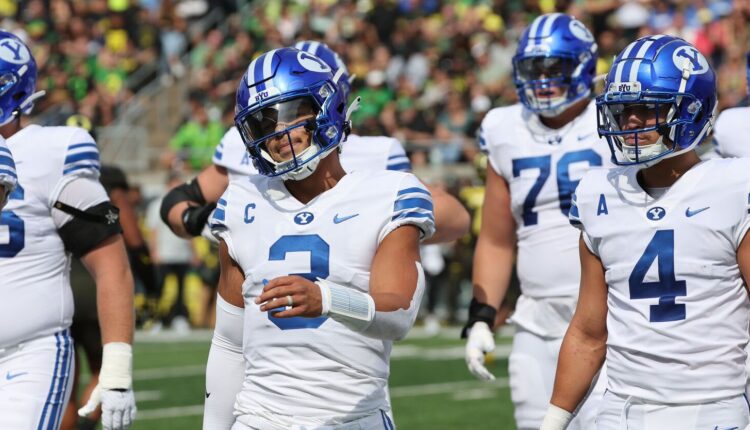 There is tremendous pressure in both places with officials roaming about looking to make sure everyone plays by the same rules. Those caught cheating are flagged and, depending on which facility witnessed the infraction, the consequences range from expulsion to a 10-yard penalty and a repeat of the down.

Entering either testing center unprepared for an exam is a recipe for failure.

BYU has had three different tests in the young football season. The Cougars scored a lot of points at South Florida (50), just enough against No. 9 Baylor (26), and not nearly enough at No. 25 Oregon (20). Same story for the defense. They stuffed the Bulls, held off the Bears and got quacked by the Ducks.

BYU learned in the first exam at South Florida that when everybody does their job, the game becomes pretty easy. The Cougars also know that when Puka Nacua, a junior, is on the field, there is no one better.

Losing him in the first quarter after scoring two touchdowns, was like breaking the lead in your No. 2 pencil at the ‘other’ testing center. You can still get it to work, but it’s not the same. Fortunately for BYU, the Bulls didn’t put up much of a fight.

Junior linebacker Max Tooley returned an interception for a touchdown. The Bulls were down 21-0 after seven minutes and the Cougars rolled 50-31.

The A-grade performance masked the absence of senior receiver Gunner Romney, who was injured early in fall camp, and the loss of Nacua to a high ankle sprain. The 1-0 start felt good, but moving forward without those two, as Baylor and Oregon approached, made the first few weeks of fall semester a lot more difficult.

Entering the testing center for No. 9 Baylor was an exam BYU had been thinking about and plotting over since the Bears 38-24 beatdown in Waco last October.

The Cougars, even without Romney and Nacua, arrived determined to do better. They were prepared to answer all the questions the Big 12 Champions would pose – were they physical enough, fast enough, and talented enough to compete?

BYU’s 26-20 victory in double-overtime delivered enough A-performances to hide a developing deficiency. Hall peppered the Bears for 261 passing yards, including 122 and a touchdown to redshirt freshman Chase Roberts.

Roberts returned the favor and threw a touchdown pass to Hall on a trick play in the third quarter. Defensively, the Cougars sacked Baylor quarterback Blake Shapen four times and stopped the Bears for a final time in the second overtime period.

Fans stormed the field and BYU leaped up in the polls to No. 12. Lost in the euphoria, however, was a troubling trend — the Cougars couldn’t run the ball (83 yards).

Also, Jake Oldroyd missed two potential game-winning field goal attempts one at the end of regulation and the other in the first overtime period.

Still without Nacua and Romney, and now defensive linemen Tyler Batty and Earl Tuioti-Mariner, BYU rolled into the testing center at Autzen Stadium to face No. 25 Oregon.

It didn’t take long for the Cougars to realize they had studied for the wrong test. The Ducks scored on six straight possessions to build a 38-7 lead. The BYU defense, which spent the previous Saturday in the right place at the right time, was often in the wrong place at the wrong time — or all of the time.

Another missed field goal from 38-yards during a stage where the game was still a contest set BYU back emotionally and the lack of a running game (61 yards) did them in physically.

The Cougars were outplayed so much that Hall’s 305 passing yards hardly made a dent in a 41-20 defeat.

This is a test BYU failed. The good news is the school year has barely started and there are nine more tests on the way.

BYU hosts Wyoming (tonight) and Utah State (Sept. 29) in their own testing center. To find success in the two upcoming games spread over six days, the Cougars need only look at the results from the three previous exams.

First, they need Nacua and Romney back ASAP! Their presence alone changes how a secondary stages a defense against Hall’s NFL arm. If they remain out, the younglings like Roberts, Keanu Hill, Kody Epps and Brayden Cosper will need to play older and faster.

Second, Brooks and Lopini Katoa have to be more effective running the football. Even against stout defensive front sevens, like Baylor and Oregon, there have been holes to run through behind that huge offensive line and they just haven’t done it.

Third, Oldroyd must get out of his kicking funk or Justen Smith needs to replace him.

Wyoming and Utah State are the final two tests before the mid-term exams against Notre Dame (1-2) in Las Vegas (Oct. 8) and No. 10 Arkansas (3-0) at Provo (Oct. 15). A strong performance could set BYU up for a run at a top 10 finish and a final exam in a New Year’s Six bowl game.

Never mind the Irish and their struggles. They are still Notre Dame. The game is still at Allegiant Stadium in Las Vegas and it’s still on primetime television (NBC). Acing a test against the Irish will always boost a team’s national GPA.

Arkansas could be the big fish that would redeem BYU’s performance at Oregon and send them marching into unchartered waters during the Cougars’ final year as an independent.

Both BYU and Arkansas have plenty of homework to do before Oct. 15 gets here.

Those approaching mid-term exams should have BYU’s full attention, knowing that solid performances over the next two games are paramount in their preparation. First up is Wyoming. Unlike the testing center on the south end of campus, the testing center at LaVell Edwards Stadium will be rocking and the results will be anything but private.

National television for a national fan base that is still enjoying a national ranking is all the more reason for these Cougars to study, prepare, show up, perform and pass the test with flying navy-blue and white colors.