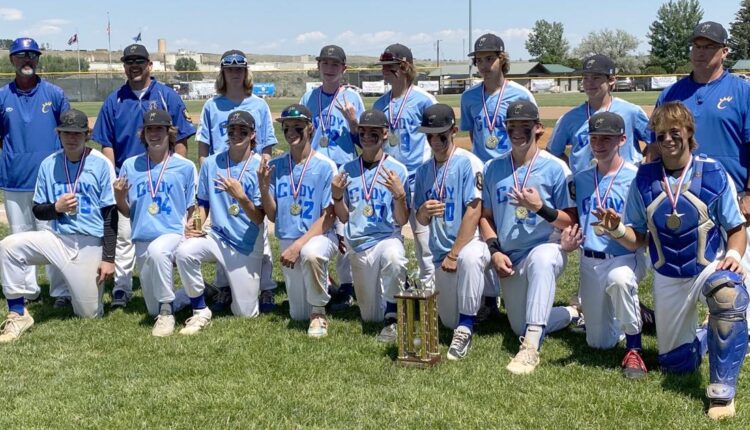 It’s safe to say the Cody Legion baseball team has found a groove as they head to the Northwest Class “A” Regional Tournament in Vernal, Utah, this weekend.

The Cubs are in the midst of their longest winning streak of the season at seven, with pitching that has kept hitters flustered and an infield and outfield that are making some of the most difficult plays look routine.

“We’re a scrappy bunch,” coach Bart Grenz said. “The guys go out there, they play together, just seem to really enjoy rooting for each other and seeing the guy next to them do a good job.”

Cody will face off against the Minico Storm out of Rupert, Idaho, on Friday at 10 am, and while they won’t be bringing the kind of experience they showed up to Alaska with last year, the young Cubs will bring with them a hot offense to go along with the pitching and defense.

Outfielder Wyatt Carlson hammered opposing pitchers throughout the tournament, finishing the week with a sizzling .643 average. That included four doubles in five games and nine RBIs.

“We are going to Utah to try and win, and if we can keep up with how we’ve been playing, I have a feeling we will win,” Carlson said. “The players we are going to see up there are going to be good, and I feel we can battle with them.”

Trey Schroeder had his hands full on the mound shutting down opposing hitters, but won his two starts in convincing fashion. He also hit .500 in five games on his way to MVP honors.

Catcher/left fielder Jace Jarrett lit up opposing teams on his way to a .444 average with two doubles, a triple and seven RBIs.

“We’ve had high expectations all year,” Jarrett said. “Our whole goal from the first practice of the season was getting to Utah and winning state, not just be the second team that sneaks in there.”

That second team is the Casper Drillers this year, and they will join teams from Oregon, Alaska, Montana and Utah, along with the Idaho team the Cubs face on Friday in trying to win the biggest tournament of the year.

“Every team there except for two are state champions,” Grenz said. “Every team has had success and will have a lot of confidence going in there. You just have to go in and play with confidence and get after it.”

While the Cubs may be firing on all cylinders, the road to a regional championship isn’t exactly a smooth one. Cody’s depth will take a hit as four players won’t be able to make the trip for various reasons.

Twins Myles and Townsend Bailey can’t make the journey, and William Duke and Trey Thomasson also will not be able to attend.

“We have changed the lineup all year long and put kids in different positions at different times,” Grenz said. “We’re going to miss the guys that aren’t there, but we like the guys we are taking.”

Thomasson finished the season with a flurry of standout offensive and defensive performances, but is currently in Mexico on a mission with his church.

“Trey really picked it up this year when he got back from Brazil,” Jarrett said. “With him gone I may play a lot more in the outfield which I don’t mind. I love being the catcher, but it’s hard on the knees.”

While the team may have high expectations, there may have been some doubt as to how a team that lost so much firepower last year would be fair this season, but the results speak for themselves. And every player will be able to return next year to go for a fourth consecutive state title.

“We celebrate the state championship for a while, but then it’s time to play more ball,” Jack Schroeder said. “I’m excited for Utah, I think we all are.”

A win on Friday morning in the double elimination tournament will advance the Cubs in the winner’s bracket and they would play at 4 pm on Saturday. They will have to battle their way back starting at 1 pm with a loss.

“This is about the youngest team we have every had,” Jarrett said. “You always have to play to win and go there and learn, but we are kind of young and just excited to play a lot more baseball.”

And the future keeps looking brighter for the young team.

“Like any other game or tournament we are going there with the mindset to win,” infielder Ben Reinker said. “But this will also get us better for next year and just keep proving how if we play together we are a really solid team.”