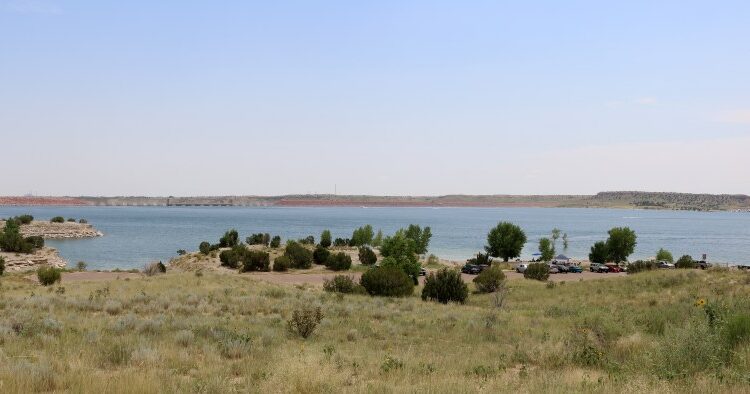 Two decades of drought conditions in the Colorado River Basin have prompted dire warnings and alarming headlines about climate change and the Colorado River water crisis. Critically low water levels in lakes Mead and Powell now threaten the ability to generate electricity at Glen Canyon and Hoover dams and spurred Bureau of Reclamation Commissioner Camille Touton to issue an ultimatum: On June 14, Touton announced that Colorado Basin states would have 60 days to come up with a plan to reduce water use by 2-4 million acre-feet per year. (An acre-foot of water is the amount needed to cover an acre of land with one foot of water.)

If Colorado, Wyoming, Utah, New Mexico, Arizona, Nevada and California can’t agree on a plan, the bureau will use its emergency authority to make the cuts, Touton said.

Imperial District Board President James Hanks expressed the district’s refusal to compromise when state officials gathered in Phoenix to sign the 2019 plan.

“As champagne is being prepared for debauched self-congratulation in Phoenix, remember this: The IID is the elephant in the room on the Colorado River as we move forward. And like the elephant, our memory and rage is (sic) long,” Hanks said.

As the Bureau of Reclamation’s mandate now makes clear, the 2019 plan proved insufficient to avert the current crisis and the Imperial District is indeed the elephant in the room, refusing to recognize the current reality on the Colorado River.

Growing cotton in a desert

Food production is a critical use of water, but not all agricultural water uses produce food. Growing cotton is one example, and the Imperial District supplies Colorado River water to 463,721 acres of cotton fields, according to the District’s most recent crop report. Arizona also uses Colorado River water to grow cotton in the desert. U.S. Department of Agriculture data show that Arizona farmers grew 258,000 acres of cotton in 2021.

Water consumption data from the University of Arizona shows that growing cotton in the desert requires 41.2 inches of water per year. In other words, cotton grown in the Imperial District and Arizona requires about 2.8 million acre-feet of water per year. But while one area of the federal government (Bureau of Reclamation) calls for reduced water use in the basin, another (Department of Agriculture) subsidizes those cotton fields, providing more than $4 billion between 1995 and 2015.

Not a sudden crisis
Mitchell and Colorado Attorney General Phil Weiser recently penned an editorial pointing out that Colorado is one of the few U.S. states that administers water rights based on “the availability of water supply in a particular location at a particular time.” Colorado’s water management system was key to the Upper Basin reducing water usage by 25% in 2020, “a huge reduction in water use of almost one million acre-feet.” When added to the “661,000 acre-feet of water provided from Upper Basin reservoirs in 2022, the Upper Basin is providing roughly 43% of its annual water use to help protect Lake Powell.”

In spite of the disparities between Upper and Lower Basin water use, officials in Lower Basin states – like Tom Buschatzke, director of Arizona Department of Water Resources, and Adel Hagekhalil, general manager of the Metropolitan Water District of Southern California – responded to the bureau’s mandate by urging collaboration. As the numbers show, the Upper Basin states, especially Colorado, have done much more to conserve water than the Lower Basin states, which have consistently taken more than their share of water under the 1922 compact.

Another example of Colorado’s leadership in responsible water use is groundwater management. Since 1969, Colorado has recognized the physical connection between surface waters and most groundwater aquifers. The Lower Basin states have not. For example, rivers deposit rocks and sand along their channels and floodplains. River water fills the spaces between the rocks and sand, forming alluvial aquifers. These aquifers are an integral part of streams and rivers; pumping water from them reduces surface-water flows.

In general, Arizona law does not recognize the physical connection between groundwater and surface water. From a legal standpoint, Arizona allows groundwater pumping that reduces streamflows to the detriment of senior water rights. California is just beginning to legally recognize the connection between surface water and groundwater, but groundwater extraction continues to deplete aquifers and cause subsidence, a gradual sinking of land. Ground currently is sinking more than a foot per year in some parts of California, according to ongoing research and multiple news reports.

Finally, anyone reading the alarming headlines would be tempted to believe that the Colorado River crisis is a sudden, unprecedented result of accelerating climate change, but a report published in the May 2007 issue of Geophysical Research Letters indicates otherwise. The authors used paleo-climate data to reconstruct Colorado River flows at Lees Ferry dating back to the year 762. They document multiple “multi-decadal (Upper Colorado River Basin) droughts” during the past 1,260 years, including one “in the mid-1100s” that persisted for “about six decades.”

This means that 15 years ago scientists demonstrated that, even without the effects of climate change, the current 20-year drought was not uncommon and the situation can get much worse, a reality that the Lower Basin states ignored.

“It should be obvious to anyone: Trying to fill a bathtub with the drain wide open is foolish,” wrote Terry Scanga, general manager of the Upper Arkansas Water Conservancy District. “This is precisely what the operators of the Colorado River system (lakes Powell and Mead) have been attempting to do for the past 20 years. They have disregarded the increased withdrawals by the Lower Basin states and the ubiquitous arid nature of the Southwest.”

This work is licensed under a Creative Commons Attribution-NoDerivatives 4.0 International License.