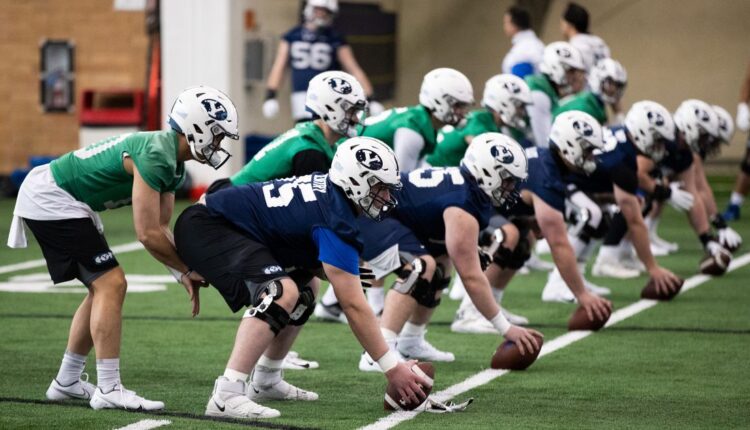 Funk hopes to find a house, move his wife to Utah, and celebrate his eldest son’s wedding before starting fall camp.

(Jaren Wilkey | Courtesy BYU Athletics) Any quarterbacks vying for the starting appearance were voided by the departure of Zach Wilson on the first day of Spring Football, March 1st.

It’s been almost four months and Funk is still looking for a home.

I spoke to Funk yesterday to prepare for the BYU soccer positions preview, but it was also the first time he has spoken to him since coming to Provo. So it was our first meeting – even if it was just a phone call.

“It was crazy, but no, everything is fine,” said Funk. “The people were great and the kids worked hard and they are fun to train. You made me so welcome and everything went well. The only thing that was challenging at this edge of the forest is the housing market. … But other than that, things were pretty good. “

For those following Funk’s résumé, he had a year-long hiatus between jobs just before joining Provo. It wasn’t something he was up to, but something that had just happened – and it kind of worked for him.

Funk was looking for a new opportunity after being laid off at UTSA after the 2019 season and doing some interviews, but then COVID-19 came along and brought almost everything to a standstill.

While he didn’t necessarily feel burned out, it was a chance to catch his breath.

Funk has been able to catch up with his wife and watch almost every NFL game of the 2020 season for the first time in what appears to be an eternity.

“Then the next cycle came and went back on,” said Funk. “I try to stay a positive person. It was definitely a silver lining at the time and I’m just cheered to end up here at the end of it all. “

While football is now in the off-season, Funk is busy finding a house to move his wife to Utah and also helping his eldest son, who is getting married out here in a month.

Then the focus is back on football.

“As soon as I’ve got my wife out of here and settled in – I’m just looking forward to it – and then into the season,” said Funk. “[I’m] I was really excited to be here and really enjoy the staff and kids. “

Covering Jazz-Grizzlies Game 1 made me happy

I’m a Spurs fan, but if your editor asks if you’d like to help with NBA playoff coverage, go for it. While I would have liked the Spurs to have won their play-in game and got to where Memphis is now, that doesn’t change my love of covering the sport – and this was my first live event since BYU’s regular soccer season finale and the first one to be surrounded by fans since the West Coast Conference tournament in Las Vegas days before the pandemic brought everything to a standstill.

It felt so surreal to walk through the hall.

I think I was so blown away that I didn’t even recognize Dwyane Wade as he walked past me. You may be thinking, are you sure it was him? YES. I vividly remember seeing a super tall man walking towards me in a long cardigan. I remember liking the cardigan and thinking he stood out in it when every other man appeared to be wearing a jazz t-shirt or leotard.

Then I saw the Utah Jazz tweet that Wade was at the game and when I saw a photo of him my mouth fell. It was a long cardigan type.

Obviously he also wore a baseball cap and face mask, so it probably wasn’t difficult for anyone to really notice who he was. At least that’s how I tell myself.

But back to where I started, hearing the cheers and boos from the fans filled the Vivint Arena was a sound that I hadn’t realized I was missing. With the exception of the face masks we all wore, it almost felt like we weren’t in the middle of a pandemic.

• In addition to the return to full capacity at LaVell Edwards Stadium in the fall, seven of BYU’s 12 games will be shown on ESPN or ESPN Networks. One game is being shown on the CBS Sports Network and four games are still awaiting their TV fate.

• BYU surprised many college softball fans last weekend when the Cougars not only survived both Friday playoffs, but also eliminated the 15th seeded state of Arizona. In the softball world, the Pac-12 is a powerhouse, though sometimes overlooked (um, the sowing was a slap in the face), and the Sun Devils are among the top Pac-12 teams. Although BYU failed to survive the Tempe Regional final, it proved that the Cougars not only deserved to compete in the NCAA tournament, but they were stronger than most people thought.

• Mark Pope stands up and screams on a glacier in Alaska.

Normitas Spanish lessons of the week

I feel ridiculous for not recognizing Dwyane Wade.

I feel ridiculous for not recognizing Dwyane Wade.