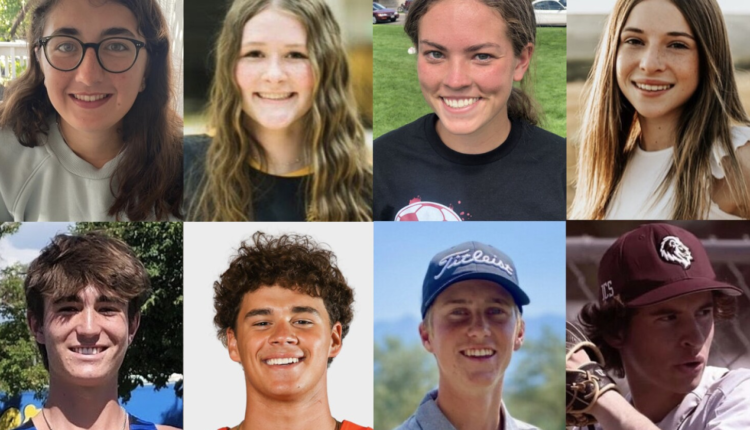 Jack Johnson enjoyed his best game of the season in Week 3 in leading Brighton to a 49-7 rout of Highland.

The junior complete 13 of 20 passes for 243 yards and five touchdowns as the Bengals jumped all over the Rams for their third straight victory.

“Jack is a very talented QB that is always working to improve his craft. He does a great job with his preparation throughout the week leading up to the game. He watches a tone of film and takes pride in everything he does in practice. He’s always trying to make his teammates around him better and is a very good leader on our team,” said Brighton coach Casey Sutera.

Johnson had his first zero turnover game of the season against Highland which helped him improve his season totals to 1,007 passing yards and 12 touchdowns.

With a big showdown this week against Olympus minimizing turnovers will be key again.

The four-year starter has recorded 14 goals and eight assists this season for the 6-1 Reds.

“As a team captain this year Keana has been the lone senior starter so far this year. She has helped to lead our young team to a great start in region play. Keana is always positive and working hard providing a great example to her teammates,” said Cedar coach Scott Kamachi.

As she tears things up on the soccer field, Tolman is also working toward her associate’s degree from SUU at the same time.

Roy opened region play with victories over Kearns and Granger a week ago, and coach Madi Robbins said the leadership of junior Kjerstin Waite played a big role.

The outside hitter has over 30 kills so far this season and was key in both region wins with her timely hitting.

“She has lately been really focusing on her defensive game and it has really shown, it’s been game changer. She uplifts our whole team,” said Roy coach Madi Robbins. “But the overall reason she is being highlighted is because she has really stepped up as a leader. One of our captains got a minor injury and Kjerstin had to step up as court captain and she absolutely has. She takes responsibility of her successes and errors and is an emerging leader.”

Enjoyed arguably her best performance of the season last weekend at the prestigious Timpanogos Invitational.

Avalon Mecham ran a very controlled race in winning the meet with a time of 18:29.6, finishing 16 seconds ahead of the runner-up finish from Timpanogos.

“Avalon comes to practice every day and gives it 100%, never misses. Just a real hard-working type of athlete that sets goals and does what it takes to accomplish them. She makes the rest of her teammates better by the example that she sets every day,” said American Fork coach Bruno Hunziker.

Mecham has consistently been one of the top runners in 6A since her freshman year, last year finishing runner up at the 6A state cross country meet just two second behind Herriman’s Addi Bruening.

As the top returner from last year’s race, Mecham is positioning herself to be the favorite at state later this year.

Going head-to-head against Mountain View’s Liam Heninger in the final meters, Echohawk prevailed by less than a second, winning with a time of 15:24.2. Heninger finished season in 15:25.0.

“Tayson understands the importance of hard work. He is a great teammate and has been a tremendous influence on the team. He has a determination and a desire to be great,” said Orem coach Andy Jacobs.

Last season Echohawk finished second and the 5A state meet and will once again be one of the top runners in the field later next month.

Having just moved to Utah recently with her family from Chicago, Rowland Hall junior Sophie Baker is enjoying a great start to the season.

“Sophie Baker is player with an excellent game along with a really strong mental attitude towards her matches. She is focused from the moment she is put on the court to play. She is a pleasure to coach and has had an amazing season so far with a 9-1 record with her only loss coming to nationally-ranked Avery Olsen from Brighton,” said Rowland Hall coach Rich Francey.

Some of Baker’s wins have been against players from Ogden, Grantsville and West.

Jones won the two-day tournament shooting a combined 12-under, which included a scintillating 10-under 62 in the opening round at the Grayhawk Golf Club, site of the NCAA golf championships.

“Best thing about Cooper, when things are down and the team needs a big push, he delivers. He is an amazing player and person. To win it at 12-under is huge. Kihei Akina won it last year at 11-under,” said Lone Peak coach Derek Farr.

Jones’ outstanding tournament helped the Knights to a fourth-place finish at the prestigious event.

Came up big last week in leading ICS to a pair of victories over Telos on the diamond last week.

“Kyler is a solid leader, he has been serving as our captain for two seasons. He’s a good hitter with a little pop. Kyler is a solid player in all positions. Kyler is very versatile playing short, pitching and catching. He’s selfless and picks us up by even playing in the outfield when needed,” said ICS coach George Sherrill.

In the second game against Telos, Begg also earned the victory on the mound by striking out nine batters.