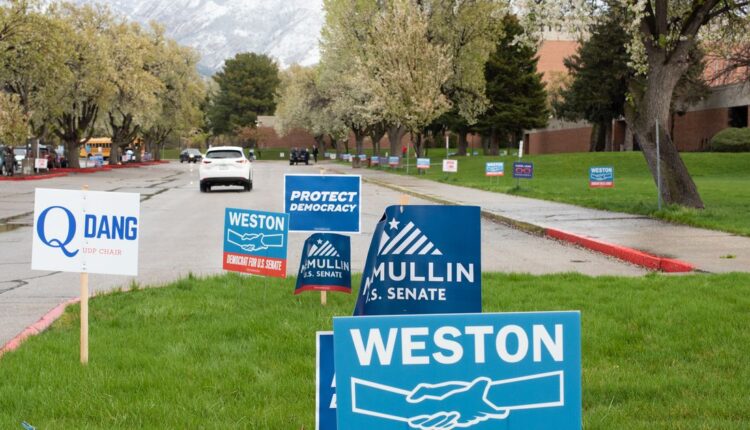 Don’t ignore the Democrats running for office in Utah

Their campaigns for the Legislature and local offices are about hope and the future, not fear and the past.

(Briana Scroggins | Special to The Tribune) The Utah Democratic Convention was held at Cottonwood High School in Murray, Utah on Saturday, April 23, 2022.

By Kael Weston | Special to The Tribune

While I am no longer the Democratic nominee for this election for the US Senate in Utah, there remains much to be done to help move our state forward and Utah families who feel most disenfranchised.

Many of these Utahns live in the western parts of Salt Lake Valley, where people shop at the Perez Market or African Market on 3500 South. Where families worry about rent increases, not the stock market. Where an unexpected medical or car repair bill can set single working moms back financially for many months. Where our country’s broken immigration policy instills fear into the children of undocumented parents employed as hourly-wage housekeepers and roofers. Where labor unions still have members. Where bus stops are crowded.

I write as a Utah voter now, not as a candidate, and take seriously our Election Day choices. This is especially critical after Utah’s political maps were egregiously gerrymandered in our state’s most colorful and democratic areas.

During my US Senate campaign, a voter gave me a memorable bumper sticker that reads: “Boundary Pass: Visit Utah’s Congressional ‘Four Corners’ 900 East to 2100 East on 3900 South.” I put it on my refrigerator.

But first and most, I should restate the importance of – pick your word – retiring or firing Sen. Mike Lee on June 28 in the Republican primary. There is a proven problem-solver in Utah’s US Senate race. That candidate is Becky Edwards. The sooner we can move beyond Lee’s self-centered, embarrassing and un-democratic brand of politics, all the better. Utahns deserve a substantive statewide race focused on issues – good jobs, water, clean air, health care, housing, infrastructure, gun violence and public safety, inflation, public lands and, I believe, the rights of women to make critical health decisions with their physicians.

Campaigns at their best are about the future. Hope. Don’t fear. unity Not division. A “Utah Way” that works for all Utahns.

Here in our Beehive State democracy is failing. Around 40% of political races in Utah are uncontested this year. And where the overwhelmingly Republican incumbents are challenged, some continue to argue that “Democrats can’t win.” This is both demoralizing to candidates, new ones especially, but also counter to building a healthier political marketplace in our fast-growing state. Democrat is not a four-letter word. And, as I diplomatically remind my persevering Democratic friends, Republican is also not a four-letter word. All of us should welcome deeper and varied political discussion, done respectfully.

Longtime proud Utah Democrat Ted Wilson, who ran strong campaigns for governor and US Senate in the 1980s, said that “dozens of debates” used to be common between candidates, up and down the state. He once shared a ride to a remote gubernatorial debate stage with his Republican opponent, Norm Bangerter. Those were the days.

What motivates my former campaign team and me right now are magnetic and hardworking Democratic candidates stepping forward across our state. In Logan, Professor Patrick Belmont, a hydrologist and geomorphologist at Utah State, is running for a seat in the Utah Legislature. So is Fatima Dirie, a former refugee from Somalia.

Likewise on the ballot is Dr. Rosemary Lesser, an MD and veteran in Ogden, the only incumbent Democrat in the state Legislature residing outside of Salt Lake Valley.

Taylorsville’s Lynette Wendel lost her election two years ago by 83 votes. She’s back at it on the campaign trail. Ashlee Matthews, Angela Romero, Sandra Hollins, Liz Weight and Clare Collard, all strong local leaders, represent our state’s most diverse neighborhoods. Let’s keep them in that role.

Lucas Ramirez and Ann Schreck have put their names forward in Utah County. In Cedar City, Dallas Guymon is working hard to bring political balance to a booming county, but also where too many children still go hungry. Ila Fica and Chuck Goode, a candidate for County Commission, are helping lead conversations about water conservation in arid Washington County.

In Salt Lake, a lynchpin race is for county clerk. The current chief deputy, experienced and proven Lannie Chapman, is up against an extreme and untested Republican opponent who has questioned mail-in balloting.

Each of them, and others, deserve our gratitude. I will be knocking on many doors in the weeks ahead. Find a candidate you believe in and join the effort. We can get better leaders but only if we work hard at it, all the way through Election Day.

Democracy is on us.