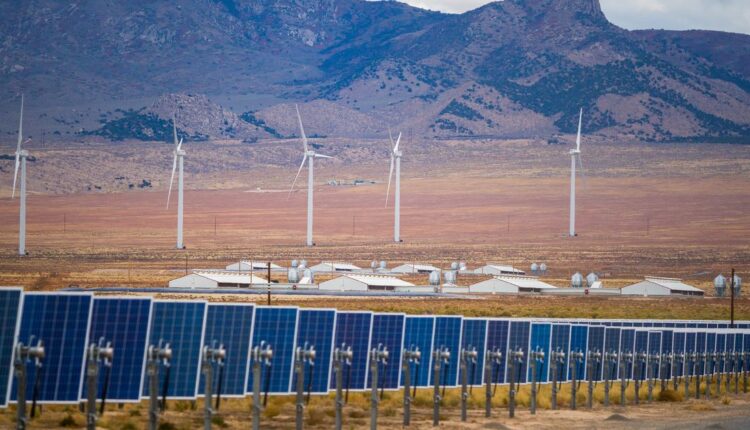 Arrangement lets them accelerate to 100% renewable for all residents by 2030.

(Trent Nelson | The Salt Lake Tribune) Wind turbines rotate amid solar panels north of Milford on Tuesday, Oct. 5, 2021. Eighteen Utah communities have opted into a state agency that will accelerate conversion to renewable electricity for their residents.

This story is part of The Salt Lake Tribune’s ongoing commitment to identify solutions to Utah’s biggest challenges through the work of the Innovation Lab.

Roughly a quarter of Rocky Mountain Power’s Utah customers are headed to 100% renewable electricity from the Community Renewable Energy Agency, a public entity created by the Legislature that is the first of its kind in the nation.

Under the 2019 Utah Community Renewable Energy Act, 18 Utah cities, towns and counties have committed to having the agency negotiate with Rocky Mountain so that all of their residents can buy clean, renewable electricity by 2030. The plan required legislation to allow the Utah Public Service Commission to regulate the group separately and allow different rates.

Utah communities had a deadline of May 31 to commit to join the agency. Twenty-three entities committed to the early phase, but five of those have dropped out. Remaining are three counties, nine cities and six townships stretching from Springdale to Ogden to Moab.

Those who pay for 100% renewable electricity are essentially paying to add that clean power to the grid. Everyone shares the same electrical grid, so in practice there still will be times when renewable customers are drawing down fossil-fueled electricity. Still, the Community Renewable Energy Agency’s commitment to clean electricity should speed the entire grid’s transition. In other words, these communities are leading out on the clean electricity conversion.

“This program is not only the first of its kind in Utah. It’s the first of its kind in the United States,” said Salt Lake City Mayor Erin Mendenhall. “Together with Rocky Mountain Power, our communities are building the clean energy infrastructure we need for our children and grandchildren to have a healthy and prosperous future. In a time when cooperation and good news seem hard to come by, we’re working across Utah together to get things done.”

Utah’s second-largest municipality, West Valley City, was among those that did not commit to the next step. First-year Mayor Karen Lang said at the time the plan had too much uncertainty around costs.

“I don’t think we have enough solid information from Rocky Mountain as to what it would cost the residents,” she said. “They just don’t have the details, or they’re not sharing them. And so I’m not comfortable committing our residents to anything without all the information.”

A 2017 study prepared for Summit County estimated the renewable rates to be 9% to 14% higher than regular rates, but the cost of renewables has declined since then.

“I highly expect it will be less than that,” said Christopher Thomas, senior energy and climate program manager for Salt Lake City.

Residents in the participating cities and towns can opt out of the program and stay on the old rates if they wish. Thomas said the entities will have the same process for notifying residents and giving them a process for opting out. He said they will have all the rates before making the decision, and they’ll have a five-month window to decide.

There are no minimum numbers of residents that have to participate for the cities and towns to remain in the program.

The communities will each need to adopt ordinances to proceed. Thomas said the program could launch as soon as 2023.

Don’t ignore the Democrats running for office in Utah