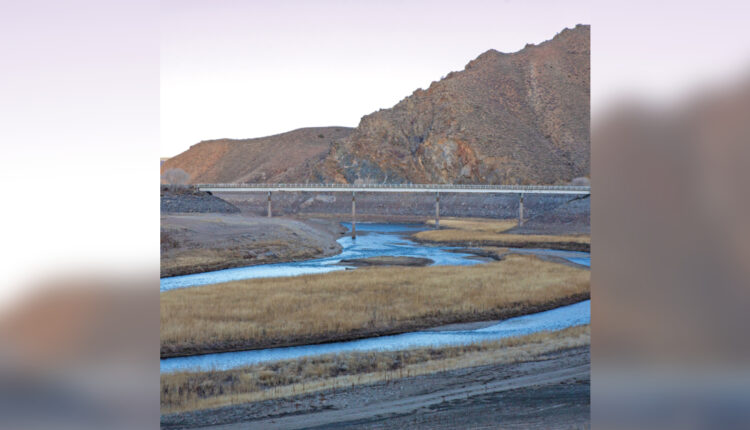 Last month, Lake Powell dropped below a critical threshold elevation of 3,525 feet above sea level for the first time since it filled in 1980 — despite emergency releases in 2021 from reservoirs in the upper basin, including Blue Mesa. That target level provides a 35-foot buffer above 3,490 feet, the point at which Glen Canyon Dam can no longer generate power.

As drought persists across the western half of the US, the water level at Lake Powell, which sits on the Utah-Arizona border, has continued to fall. During 2021, the Bureau of Reclamation (BOR) sent water from Gunnison’s Blue Mesa Reservoir and Flaming Gorge Reservoir on the Utah-Wyoming border downstream in an effort to protect the elevation of water in Lake Powell — and Glen Canyon Dam’s ability to continue producing hydroelectric power for roughly 5 million people across seven states in the West.

The BOR and representatives from the seven Colorado River Basin states are working on ways to maintain the elevation of 3,525. A plan is expected to be released by the end of April. John McClow, general counsel for the Upper Gunnison River Water Conservancy District, gave board members an update on the state of the reservoir at a regular board meeting on March 28.

In February, predictions indicated there was a 90% chance Lake Powell would reach the critical elevation during the 2022 water year. According to data from the BOR, the dip below 3,525 will soon be boosted by spring runoff and is not projected to persist, increasing to an elevation of 3,537 feet by the end of September. But the risk that the elevation will fall below the threshold again extends through 2026.

At 3,490 feet, the reservoir hits “dead pool,” where turbines fall idle for lack of water. But that’s not the only consequence.

“It’s more than just hydropower,” McClow said. “It’s also compact compliance. It’s also the fact that the Bureau has never operated the reservoir at this low elevation. They really don’t know what could happen.”

The Colorado River Compact is the 1922 agreement between upper and lower basin states that defines the rights and obligations of each in sharing the river’s water.

The unregulated inflow into Lake Powell, which currently sits at less than 25% full, is forecasted to be 69% of average in 2022. The drought response operation agreement may require another 500,000 acre-foot release this year that is scheduled to come from Flaming Gorge, because both the Blue Mesa Reservoir and Navajo Reservoir in New Mexico don’t have enough water to release, McClow said. But that has not yet been decided.

At the time of the emergency releases last year, no legal mechanism existed to “shepherd” the water as it traveled over 500 miles from Colorado to its final destination at Lake Powell. In addition to user diversion, water is also lost to evaporation and absorption into the ground.

Andy Spann, a local rancher who sits on the board of directors, asked if the BOR has a shepherding plan in place should Blue Mesa be called on for more releases in the future.

“According to our state engineer, the answer is yes,” McClow said. “But we have the unofficial word from the Bureau that they will not seek a release from Blue Mesa in 2022.”

Although the releases last year were conducted on an emergency basis, High Country Conservation Advocates Water Director Julie Nania said it was “pretty uncomfortable” knowing there was no plan in place to shepherd releases from Blue Mesa.

“Hearing a big commitment for a plan to improve those from another reservoir, at what point do we push back a little more knowing that, even though we’re not in front of the line this year, we’re one of the three big buckets, so it’s going to come back,” Nania said.

“In reality there are only two buckets, because Navajo is committed by contract to virtually all the water they’ve got,” McClow responded. Congress authorized Navajo Reservoir primarily to serve the Navajo Indian Irrigation Project. The Navajo project, along with the San Juan-Chama Project, claim most of the water stored in the reservoir.

As negotiations continue, McClow told the Times that his biggest worry for the upper basin is equity.