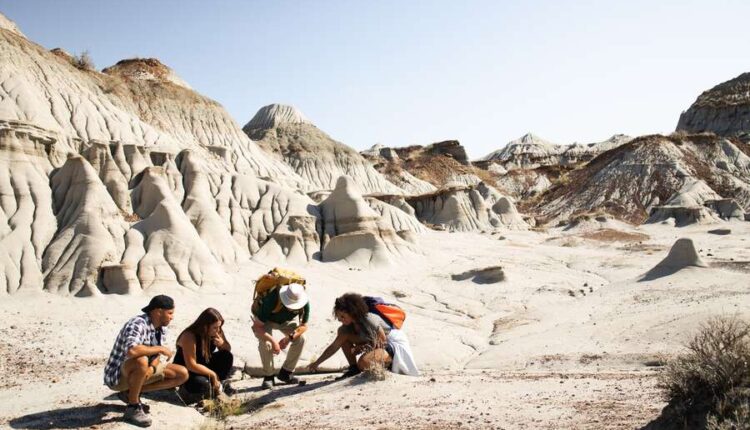 Dinosaurs: the word in itself sums up why people are drawn to sprawling deserts and rocky landscapes that might have prehistoric fossils, giant footsteps imprinted into stone, or even just a ghostly landscape where large creatures once roamed. Because dinosaurs. Enough said.

Scattered across North America are a slew of opportunities to travel not only through space but also time. Road tripping to the sites of various dinosaur digs affords the opportunity to explore the destinations themselves and the routes to and between them, all while presenting a glimpse through the eons. It’s the next best thing to visiting Jurassic Park, with the added bonus that you are significantly less likely to be eaten.

To that end, we’re taking a look at a few of the best dinosaur state and national parks, monuments, and other fossilized travel opportunities. Most of them are within a day or two drive of each other in the central United States, though Canadian dinos are worth a gander as well. Here’s where to see those old bag o’ bones.

How Dinosaurs Became Kings of the American Roadside

Dinosaurs still rule the Earth. But mostly near gas stations. 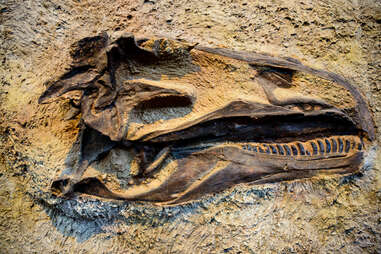 I hope I look that good when I’m that old. | Zack Frank/Shutterstock

Dinosaur, Colorado and Vernal, Utah
Located on the border between northern Colorado and Utah, Dinosaur National Monument is one of the most impressive collections of dino bones you can find outside a museum, ie still set in stone. While it’s technically not an actual national park, it’s still positioned amidst a stunningly beautiful landscape somewhat in between Yellowstone, Zion, Arches, and Rocky Mountain National Park, meaning that it’s along the way to pretty much everywhere you want to go.

Famous for its Quarry Visitor Center featuring a wall boasting some 1,500 bones spanning well-known species like Stegosaurus, Diplodocus, Apatosaurus, Allosaurus, and more, it also hosts fossils from an array of other ancient animals and plants. Beyond the quarry, the park offers activities like rafting, hiking, and stunningly scenic drives.

And you can hike, river raft, and camp right next to ’em. 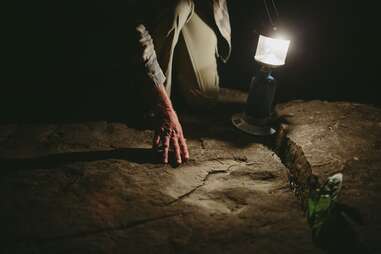 Tumbler Ridge, British Columbia
Tucked way up in the northernmost reaches of British Columbia, the Tumbler Ridge Global Geopark and its Tumbler Ridge Museum Foundation is a must for anyone who saw the T-Rex in Jurassic Park and thought “I want to meet that dinosaur.” This is one of the closest opportunities you’re going to get. Here you’ll find the upper jaw and teeth of a Tyrannosaurus, and—most impressive—the first T-Rex tracks ever discovered. Fun fact: it was here that we learned that Tyrannosaurs hunted in packs. How terrifying!

While most of the dino stuff is housed in the museum, you can hike the Flatbed Valley Geosites to see an array of dinosaur tracks. You can also hike out to the Bergeron Cliffs, where some 300 bones from dinosaurs and other plants have been found. 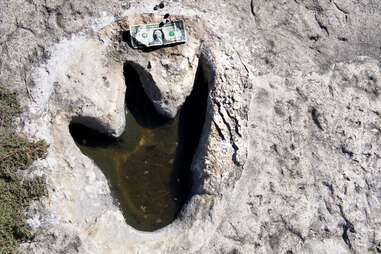 You know what they say about big feet. | W.Scott McGill/Shutterstock

Glen Rose, Texas
Smack in the center of Texas near the town of Glen Rose is Dinosaur Valley State Park. Here you won’t find bones, but you will find mind-blowingly clear trackways, otherwise known as dino footprints. Keep in mind that the park is best visited during summer dry spells, as rain tends to obscure the tracks. Even then, you might want to pack water shoes, since you’ll end up having to wade through some shallow water to see the most impressive specimens.

Throughout the park, you’ll find opportunities for hiking, kayaking, and even horseback riding. On hot days, take a dip in the Blue Hole, which is a popular spot for both swimming and catfishing. 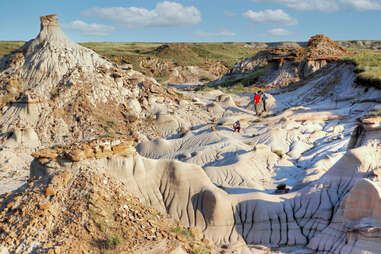 Even without the dinos, these are gorgeous landscapes to explore. | Ronnie Chua/Shutterstock

Brooks, Alberta
A stunning UNESCO World Heritage Site located roughly two hours east of Calgary, Dinosaur Provincial Park is famous for offering one of the highest concentrations of dinosaur fossils anywhere in the world. With 58 dinosaur species as well as 500 other species spanning plants, fish, sharks, rays, frogs, turtles, crocodiles, and more, there is plenty to explore.

Speaking of exploring, one of the best things about Dinosaur Provincial Park is the fact that you can actually go on hikes to wander the landscape and find dinosaur fossils that are still being excavated. Most other dinosaur parks involve seeing bones in the comfort and protection of visitor centers, so Provincial provides the unique opportunity to feel like a real paleontologist for a day. The landscape is so incredibly gorgeous, so be ready to take photos.

A couple hours away, you can also visit the Royal Tyrrell Museum of Paleontology, which is home to one of the world’s largest dinosaur displays. In nearby Drumheller, you’ll find the “World’s Largest Dinosaur.” Spoiler alert: it’s made of plastic. And it’s very weird. 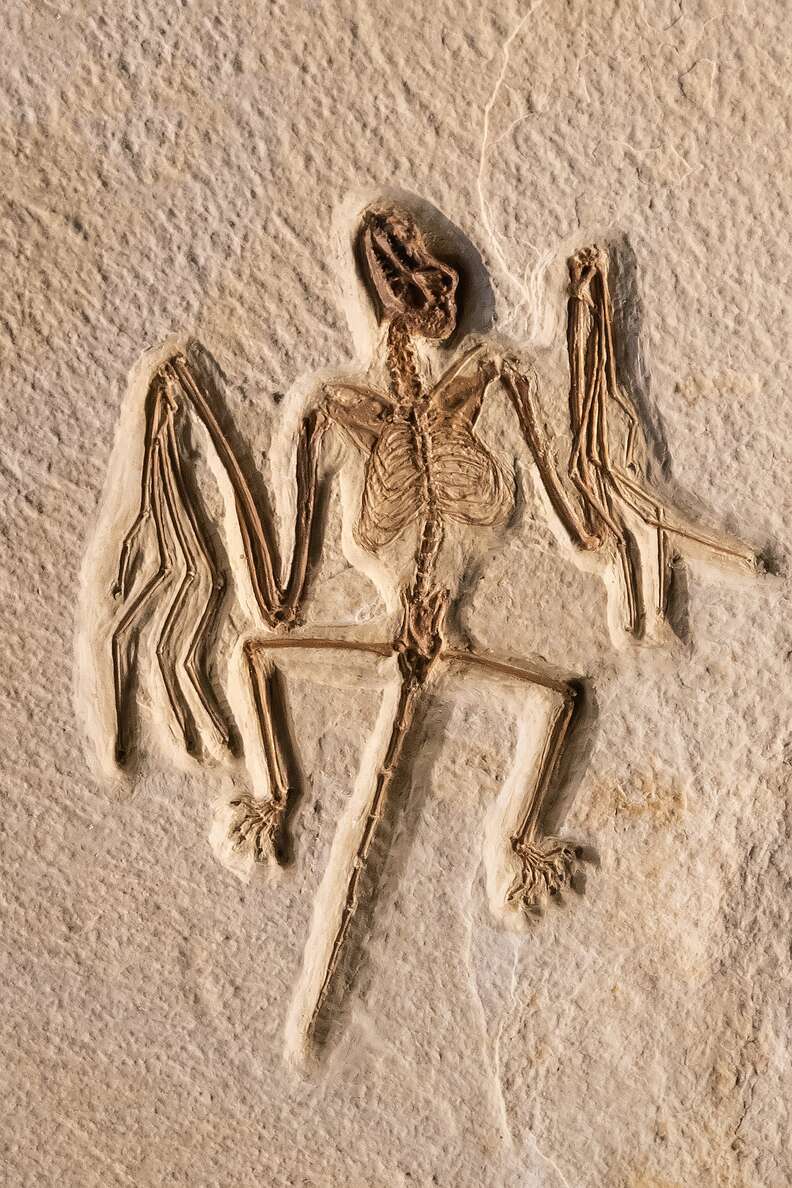 Kemerer, Wyoming
Right off the bat, you should know you won’t find any dinosaurs here. But fear not, because this is still an astounding fossil site. Known as America’s “aquarium in stone,” Fossil Butte National Monument is home to one of the world’s largest collections of freshwater fossils. Located in the southwestern corner of Wyoming, it’s just over three hours from the aforementioned Dinosaur National Monument, so you can easily pop over for a helping of “terrible lizards” there.

At the Fossil Butte Visitor Center, you’ll find over 80 casts of creatures like dragonflies, beetles, crickets, turtles, birds, fish, bats, and creatures called Palaeosinopa didelphoides (say that three times fast), which are tiny, half- foot long, otter-like carnivores. The surrounding landscape of the Badlands also provides some beautiful hiking trails. Be sure to bring sunscreen. 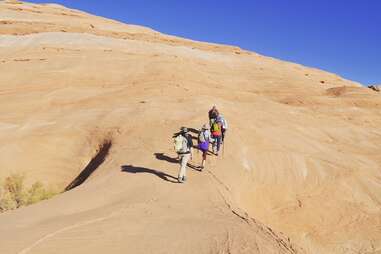 Escalante, Utah
As one of the most remote regions in the continental United States, the Grand Staircase-Escalante region was the last place in the country to be officially mapped out by the government. That being the case, it should come as no surprise that most people didn’t realize there were dinosaur fossils there until relatively recently.

We Have A Winner for Coolest-Named State Park

Utahraptor State Park will soon be open for hiking and dinosaur fans.

Scientists have found 25 unique species there, including a smattering of triceratops relatives, duck-billed dinos, and big, scary carnivores like the Tyrannosaurus Rex. Many of the remains here are among the best-preserved ever found, including some startlingly clear skin impressions.

You can check out fossils excavated from Grand Staircase-Escalante at the Glen Canyon Conservancy, or hike along the Twenty Mile Wash Dinosaur Trackway to literally walk in the footsteps of dinosaurs. It’s an easy, family-friendly trek.

Nick Hilden is a travel, fitness, arts, and fiction writer whose work has appeared in the Los Angeles Times, Men’s Health, The Daily Beast, Vice, Greatist, and more. You can follow his weird adventures via Instagram or Twitter.