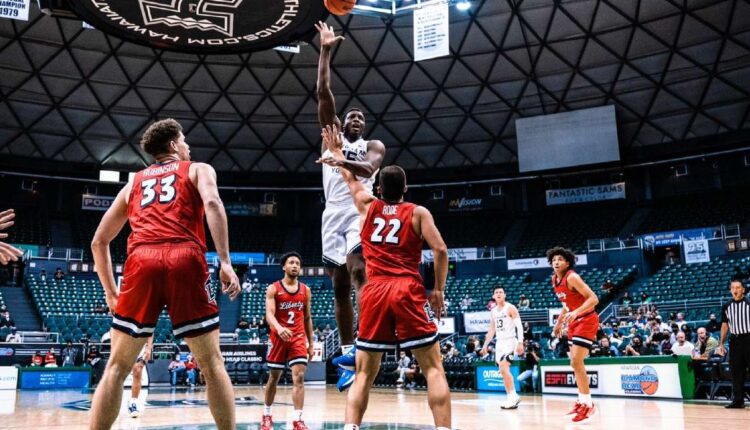 BYU center Fousseyni Traore had a career high of 19 points and 13 rebounds when he started his career on Saturday, December 25, 2021, against Liberty at the Diamond Head Classic in Honolulu, Hawaii. (Courtesy: BYU photo)

PROVO – Whether Fousseyni Traore was a mean or a cheerful gentleman may depend on your point of view, but the BYU freshman made the most of his first start in a cougar uniform on Christmas Eve.

In the state of Aloha, where Mele Kalikimaka rules, it was a Merry Christmas for BYU basketball. Or at least a Feliz Navidad.

Do this: Fouss Navidad.

Traore hit a career high of 19 points and 13 rebounds, and Trevin Knell added a season high of 15 points when BYU fought off Liberty 80-75 in the third-place game at the Stan Sheriff Center in Honolulu. Hawaii.

With leading scorer Alex Barcello limited on the bench and largely ineffective after 9 points in 2-of-5 shooting, BYU coach Mark Pope turned to his bench. Te’Jon Lucas had 11 points and seven assists, and Gideon George added 9 points and three rebounds for the Cougars, who improved to 11-3 during the season and were unbeaten in Pope’s three seasons after a regular season loss was.

And a newbie led them all.

“Fouss just keeps getting better and better. I’m nervous about our young people because they all have such great advantages,” said Pope, who added that Traore also had a GPA of 4.0 or “close to” in his first game Semester at BYU, 99% of which went to the first religious finals of the Mali-born, Muslim-raised international student. “But you worry about putting her in situations where it will set her back, confuse her confidence or her feelings.

“Fouss just said, ‘Why are you worried, coach? Just let me do my thing.’ We have a locker room full of really amazing young men and he’s really special. It has very little to do with his skill on the basketball court, he’s a beautiful person who cares about the right things and he’s so humble with an incredible work ethic. “

And when Traore, who earned the honor of the entire tournament team, picked up his large wooden oar symbolizing his place in the first-team roster, the freshman preparing at Wasatch Academy had a thought – one that will likely help him to adjust the rudder in the luggage rack of the aircraft for the return journey to Provo.

As for Lucas, all eyes were on Newbie Saturday.

Traore hit 6-of-7 field goals, 7-of-8 free throws and added a block, steal and assist in 27 minutes after replacing Atiki Ally Atiki in the starting XI. Picking up 2 points and four rebounds in his first six minutes of play, he helped the Cougars keep up with the Flames, despite only making 3 of 9 off the field early on.

The Cougars even took control – briefly – with a 13-1 run over 5:12 in the first half and held Liberty in mid-first half without a field goal for more than six minutes, at 9:45 to 17: 9 in Leadership to go go to halfway. But Brody Peebles’ first three, the first three, made the game equal to everyone at 21, and the Flames took advantage of an 8-0 run to take the 23-21 lead in a much more even first half that with Libertys ended 33:32 at break.

“I was just so excited. It was one of the best games ever,” said Traore, who made his first trip to Hawaii since finishing second at the 2019 Iolani Prep Classic, his junior season at Wasatch. “It was very frustrating (after the loss on Thursday). But Alex kept telling me it’s all good; we just have to pick it up. I was hungry and I know everyone was hungry here.”

Diamond Head Classic Tournament MVP Darius McGhee had a game high of 29 points and five assists for Liberty (8-6), including a Diamond Head Classic record of 14 3-points in three games of the tournament. The sixth-best scorer in NCAA Division I went into the game averaging 21.4 points per game, including a career high of 41 two days earlier in a loss to Stanford.

Speaking of the Cardinal, Stanford forced the Diamond Head Classic championship game to be canceled after retiring due to COVID-19 health and safety protocols. The planned final against Vanderbilt – which defeated BYU in the semifinals on Thursday night – was declared a no-contest, and the Commodores were named tournament champions instead.

And then when they needed a shot, they still had a shooter – Knell himself.

“You just see Trevin Knell growing. Coming in here and doing some violent games downhill. … I thought he was great tonight,” Pope said. “I thought he was crucial and I’m so proud of him.”

And then the cougars cut their sales. A team that had 35 total turnovers in the first two games of the Diamond Head Classic finished Game 3 with just 10 – the Cougars’ lowest score in six games.

“Te’Jon said just leave the ball in my hands and you’ll be fine. Now I have to listen to this for the next 72 hours – and rightly so,” said Pope.

“It’s a key feature of this team if we’re successful, but to build on a few principles. And one of those principles is to protect this ball. I was proud of the guys for ringing the bell.”

Again this mention of Lucas, who will unofficially come home with half a tournament honor.

“Te’Jon is just crazy,” said Traore. “He can find anyone. I was just so excited that he always finds me. It gave me a few simple baskets and I really appreciated it. “

BYU concludes the non-conference game against Division II Westminster on Wednesday. Tipoff is scheduled for 7:00 PM MST on BYUtv. The Cougars open the West Coast Conference on January 1st in Portland.