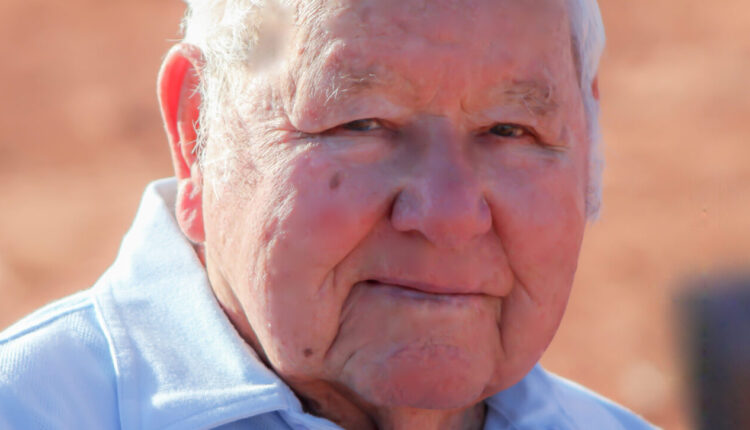 Gaylen L. Peterson, age 96, passed away quietly in his home in Toquerville, Utah, on May 21, 2022. He was born Aug. 7, 1925, in Midway, Utah, at the home of his grandmother, to Gerald Leon Peterson and Agnes Aitken Peterson. He was married to Marie Greenhalgh Peterson in the Manti Utah Temple on Oct. 28, 1948.

Gaylen grew up in the mining town of Eureka, Utah, during the Great Depression. He said: “Growing up there was wild.” He described himself as “a loner” and “about as bashful and backwards as you could be.” But the hard lessons learned in those early years helped forge a man of determination and character who always worked hard for long hours in order to provide for his family. He loved hunting and fishing and had many memorable experiences camping and traveling with his wife and children.

He was enlisted in the US Navy in July 1943 at the age of 17. After training at Camp Farragut, near Coeur d’Alene, Idaho, he was then sent to sonar school in San Diego, California. He had orders to serve in New Caledonia but was reassigned, along with several other sonarmen, to temporary duty at Pearl Harbor, Hawaii. That “temporary duty” lasted throughout the rest of the war until its discharge in 1946. This was a blessing as it kept him out of the active combat zone.

Gaylen had worked in the Eureka mines before his military service and after the war returned to them. He was baptized a member of The Church of Jesus Christ of Latter-day Saints in May 1948, and married Marie Greenhalgh that October. In 1949 he went to work at Geneva Steel where he continued until his retirement. They lived for many years in Santaquin, Utah, then moved to Toquerville in 1996.

A viewing will be held Tuesday, May 24, at the Toquerville meetinghouse of The Church of Jesus Christ of Latter-day Saints, 63 Toquerville Blvd, Toquerville, 6-7:30 pm Burial will take place June 1 at the Spanish Fork Cemetery, 420 South 400 East, Spanish Fork, Utah, following a brief graveside service at 11 am

We are grateful to all who have blessed his life and been of service – family, friends, and caregivers.