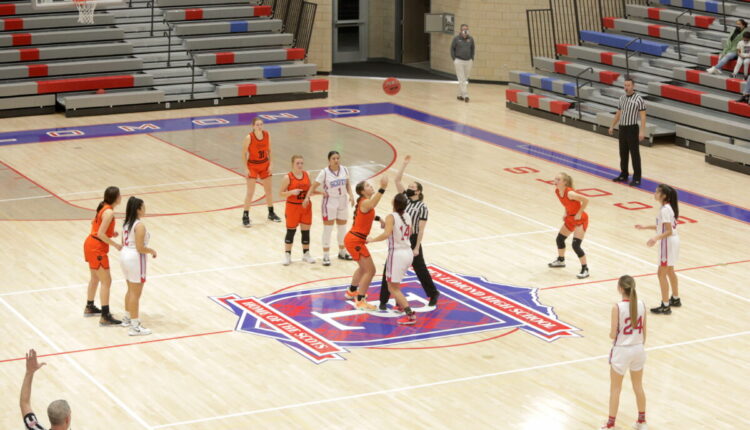 The girls’ basketball teams from Ben Lomond and Ogden High are pictured at the tipoff before a game on January 12, 2021 at Ben Lomond High School.

Probably the biggest shuffle for area teams in the last realignment took place in 4A, 3A and 2A, where Ben Lomond and Ogden fell to 3A and Layton Christian rose to 3A.

This and a few additional changes have created a redesigned Region 13 made up of Ben Lomond, Ogden, Morgan, Layton Christian, Grantsville, and South Summit.

It’s a pretty straightforward itinerary for everyone but Grantsville – and even Grantsville isn’t far away.

There are three teams that won some type of championship trophy last season. Morgan won the 3A state championship, moved up at the end of the year, and moved away from excitement after excitement as number 8 in the tournament.

Grantsville actually won the region 13 in the 2020-21 season, winning 22-4 overall and although the Cowboys lost their top two goal scorers they are still well positioned to defend the title in the region.

Here is an alphabetical look at the area teams in Region 13.

The Scots’ leading goalscorer, Senior Avery Beadles, is returning to anchor a relatively young team that is experienced in some aspects and inexperienced in others. Ben Lomond went 2-17 last season, defeating Gunnison and the Utah Military Academy.

The Scots have already played one game, a 66:25 loss on Wednesday at South Sevier. In defeat, Dory Jenson scored eight points with 11 rebounds and Maleah Richey had seven rebounds in their sophomore year.

The schedule outside of the area continues with Park City out and about, St. Joseph’s home, Duchesne’s home, Logan’s home, Gunnison home, Waterford’s home, Roy out and about, Providence Hall out and about, Juab’s home, and American Leadership Academy out of the way.

Layton Christian had a great 2020-21, finishing 17-5 overall, winning a regional championship and reaching the state semi-finals.

The level of difficulty increases sharply in 3A, especially in Region 13, which head coach Jeremy Jones calls the best region in 3A. It will be particularly challenging for the Eagles, who have a returning starter, Senior Guard Mia Jones (13.9 points, 11 rebounds per game last season).

Jones said the team’s defense should be very good and the overall challenge will be that the team essentially starts with a number of new players, including Senior Guards Mine Iscen and Bianca Silva, and Junior Guards Ruzgar Boyle and Mariana Cubero .

The Eagles have had a good thing the past two years and it wouldn’t surprise anyone if they turned out to be a force in 3A.

The Trojans hit 16-8 total, earned No. 8 in the playoffs and then began to piss off teams, first No. 1 seeded South Sevier, then No. 4 Carbon, then No. 2 Emery in the title game.

And Morgan is ready to improve in 2021-22. The Trojans return all five starters from last year’s State Championship game, plus a few other key players who helped them through the closing stages of the season.

Junior Camilla Brooks averaged 7.6 points per game and Junior Guard Elena Birkeland averaged 8.5 points for the season, having averaged 13.1 ppg at 51.5% shooting in the winning streak of seven games at the end of the season would have.

Morgan’s non-regional schedule is as tough as you can imagine. The Trojans opened the season on Thursday at Emery. After that, they defend 4A State Champion Sky View, home game against 4A Ridgeline, defend 2A State Champion North Summit and then Morgan puts on a tournament with himself, Syracuse, Bear River, Westlake, Judge Memorial and Green Canyon.

After the tournament, the Trojans play four consecutive street games against good 3A schools, then at home against East and then the big one – in defense of 6A champion Fremont on Jan. 6 to finish off the non-regional list.

Ogden returns two starters from last year’s 9-13 team that made it through to the second round of the state playoffs. Senior Post Grace Pulley (4.5 ppg, 8.2 rpg) and Junior Guard / Striker Ashley Christensen (8.1 ppg, 3.8 rpg), now a three year old starter, are these two returnees.

Overall, the Tigers’ roster is filled with seniors and juniors. Five bench players from last season who are also expected to start and / or fight for start time are Seniors Lucy Ballard, Mahine Bergeson and Heidi Balderramos and Juniors Ellie Oliverson and Ajae Belliston.

Steve Lister is the Tigers’ new head coach. In recent years he has been assistant coach under the then head coach Wes Padilla.

Lister said one of the challenges the team is facing is a road-heavy schedule outside of the region.

The Tigers opened the season on Thursday at home against Juan Diego, then played back-to-back street games with Roy, Tooele, Judge Memorial, Logan and Northridge, followed by a home game with Clearfield, then a tournament in Cedar City, then two home games against Bountiful and Waldkreuz .

And then the regional games begin.

“Region 13 will be a difficult region, we have to bring intent and intensity into every game in order to be competitive,” said Lister.

How to watch BYU / Georgia Southern on ESPN Plus