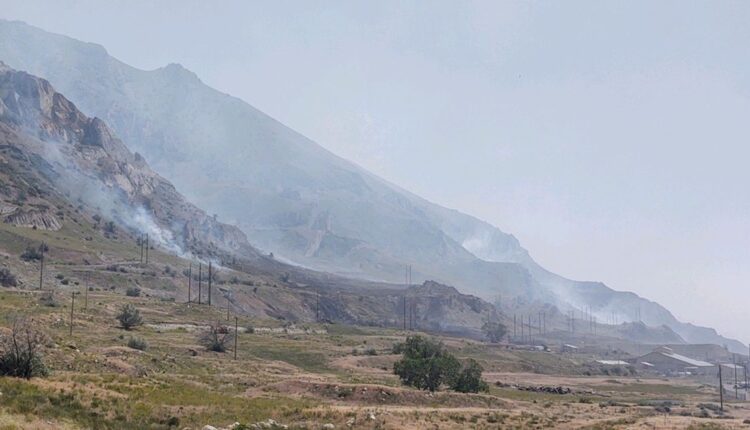 The fire in Tooele County forced the evacuation of about 60 people and closed the park Friday.

(Utah Fire Info) The Lakeshore Fire is photographed late last week as it burns a few miles west of the Great Saltair. Crews have fully contained the fire.

The Lakeshore Fire that prompted an evacuation of about 60 people at the Great Salt Lake State Park and Marina on Friday is now 100% contained, per Utah Fire Info. Closed temporarily, the park reopened at about 4 pm on Saturday, the Utah Department of Natural Resources announced.

The Lakeshore Fire burned about 400 acres and about 40 power poles, and damaged a quarter mile of railroad track, according to Utah Fire Info, and its cause is under investigation. The fire began burning Friday near mile marker 100 on Interstate 80, a few miles west of the Great Saltair.

A spokesperson with Utah State Parks said aside from “very minimal” vegetation getting burned, the park was unaffected, no injuries were reported and no structures were damaged.

But power is still out in parts of the area due to damaged power lines, the spokesperson said. The park currently is using generators to bring power to the affected area.

Just west of the Lakeshore Fire is the Cypress Fire, which started Friday evening at about 5:42 pm, per Utah Fire Info. As of Sunday morning, the fire had burned 286 acres and was 85% contained. The cause is under investigation.

The Left Fork Fire near the Dixie National Forest is only 10% contained as of Sunday afternoon. Officials said it has burned between 600 and 700 acres and was caused by humans. Difficult terrain and extreme weather is making it difficult for firefighters to address the blaze, officials said.

The fire, which started at about 1 pm Saturday, is not threatening any structures at this time, officials said, and no injuries have been reported.

Near St George, the Dalton Wash fire sits at 90% containment and has burned 378 acres as of Sunday morning.

Much of the state is under a red flag warning until 10 pm Sunday due to high winds and low relative humidity, per the National Weather Service.

Gusty winds will occur on the backside of a front that will move through today. Dry conditions will also return and with fuels remaining dry in eastern Utah, critical fire weather conditions will occur. Red Flag Warnings have been issued for this afternoon. #cowx #utwx #firewx pic.twitter.com/MIyPoGD9wT

The weather in Salt Lake City won’t be as hot Sunday compared to the past few days, with a high of 77 degrees and a low of 51, according to the weather service. It will be mostly sunny and breezy throughout the day.