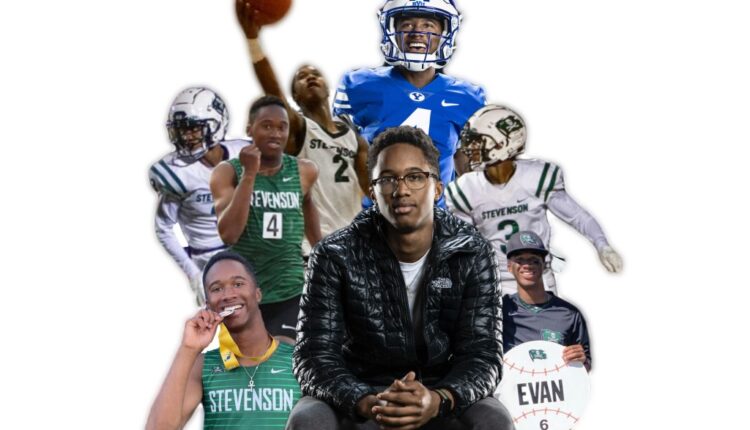 PEBBLE BEACH – It wasn’t so much the numbers he was attaining that turned college football recruiters’ heads as it was what Evan Johnson was achieving outside the sport.

Oh, his football footage captured his speed, his soft hands, and precise route running, not to mention Johnson’s ability to be left alone on an island with a receiver as a defensive back.

His athleticism in other sports, though, did not go undetected. The crossover dribbles and dunks in basketball, Johnson’s .500 plus batting average in baseball, and the Stevenson product’s county record speed in track.

“I love the fact that he’s a multi-sport athlete,” Brigham Young University defensive backs coach Jernaro Gilford said. “He fits what we look for in our student-athletes. I can’t wait to get him on campus.”

Johnson, 17, arrived in Provo, Utah recently to begin off-season workouts with BYU. But not before closing a chapter in his high school career as The Herald’s Male Athlete of the Year.

Johnson’s journey was filled with highlight-reel moments, perhaps none bigger than in his last high school event when he finished fourth in the state meet in the 100 meters.

Having broken the school and county record three weeks earlier at 10.41 seconds, Johnson became just the second county sprinter in the past 50 years to podium at state in the 100.

“When I walked off the track at state, I felt satisfied,” Johnson said. “Not just with track, but my whole career at Stevenson. I can proudly say I left it all out there.”

It was a fitting end to a year in which the 6-foot, 1-inch tall Johnson earned all-county honors in football and basketball and moonlighted in the spring as a left fielder in baseball, hitting .512.

“There was a point where I had a lot on my plate,” Johnson said. “But it wasn’t so much sports. I could always juggle that. It was about getting my homework done and preparing for tests.”

Except for an abbreviated track season in 2021, the pandemic stripped Johnson of all his sports.

So when all sports were allowed to resume at the start of the school year, the desire to compete in as many as possible was a priority.

“Originally I just wanted to focus on football,” Johnson said. “But the closer basketball got, I just got the bug to want to play. I wanted to be with my friends. That inspired me to play.”

That included baseball, where Johnson showed up after a track practice and asked head coach Nick Wilcox if he could take some swings in the batting cage in his slippers.

“I heard some rumors that he missed baseball,” Wilcox said. “I said ‘let’s see what you can do.’ He was destroying the ball in the cage … I said ‘if you’re serious, we’ll make this work.’”

The next day Wilcox saw Johnson in the parking lot in baseball pants and was asked if he could have a jersey.

“Players tend to gravitate toward him,” Wilcox said. “He’s extremely humble with a smile on his face. He would hustle down and get some swings before doing his track workouts.”

Johnson drove in 21 runs in 16 games for the Pirates, who won their first league title in 37 years, was 10-for-10 in stolen bases and had a cannon for an arm.

“What would have made the year complete is winning a CCS title in baseball and getting a ring,” Johnson said. “I told coach I’ll play whenever you need me. I just wanted to help. I had so much fun.”

Splitting time between the baseball field and the track didn’t lighten Johnson’s expectations as a sprinter. Attaining goals started with his training.

Up until the state meet, Johnson was chasing his own shadow, undefeated in both the 100 and 200, rewriting the school records in both events.

“I never worry about people around me,” Johnson said. “It’s a battle with myself. When I’m in the blocks, I don’t think about what I can do to run faster. That’s for when I’m back in the lab.”

That’s not to suggest Johnson wasn’t peeking at opponents’ times and using it as motivation throughout the season.

“What made track fun is when (Salinas’) Nyziah (Hunter) hit 10.62,” Johnson said. “That inspired me to run faster and blow those times out of the water to regain my throne.”

Of course, Johnson never lost his title as the fastest sprinter in the section. On that same day, he broke an 18-year-old county record in the 100 with his mark of 10.41.

“I was never worried about baseball being a distraction,” Johnson said. “I told coach Wilcox I’m dedicated to the team. But track has to come first. He was very supportive.”

So was Monterey Peninsula College track coach Nick Cunningham, who worked with Johnson on his blocks and provided workouts on request. But not without some reservations.

“I questioned the decision,” Cunninghan said. “He proved a lot of doubters wrong. I don’t think we’ve even remotely come close to seeing how fast he can truly run. When he gets to that level, he won’t have the option.”

The hope is track will remain a part of Johnson’s lifestyle at BYU. For now, the focus shifts to football, where he will look to provide some depth and fill a need in the secondary.

Johnson lit up opponents this past fall on the field, catching 35 passes for nearly 800 yards and 13 touchdowns in just five full games – he had five touchdowns of 40 yards or longer.

“Evan fit the mold with us being a spread offense in a number of different ways,” Stevenson football coach Kyle Cassamas said. “No question plays were designed, drawn up for him.”

The four-sport standout created jaw-dropping plays in the open field, running past defenders as if they were in cement, or making acrobatic catches in traffic.

Attention began to trickle in with the likes of Boston College, Vanderbilt and Washington State showing interest.

“He was getting looks from a bunch of different colleges,” Cassanas said. “Not having two years of film for coaches to look at made it challenging. And the transfer portal has changed recruiting.”

Fortunately for Johnson, he had a release in basketball, where he gave recruiters that came to talk to him about another version of his athleticism in another sport.

“We were able to get back to our traditional style of pressing because of Evan,” Stevenson basketball coach Justin Clymo said. “He’s a slasher, ball hander and will knock down a ‘3’ in big moments.”

Johnson averaged 12 points a game while doling out 80 assists and pulling down 158 rebounds, throwing down a handful of thunderous dunks.

“He could play collegiate basketball in a second if that is what wanted to do,” Clymo said. “He is an athlete in whatever sport he wants to put the time in. It just happens to be football.”

BYU got wind of Johnson when linebackers coach Kevin Clune came by Salinas High to talk to head coach Steve Zenk during the annual all-star football game in January.

“I had been talking about Evan the night before after one of our practices,” Zenk said. “I couldn’t understand how he wasn’t getting picked up. I told Kevin ‘you have to look at this kid.'”

The process was quick, as a visit with Johnson’s family, a trip to Provo and an offer all occurred within two weeks.

“If a coach sees something in you that he likes, that’s all that matters,” Cassmas said. “You want to be someplace that wants you. BYU loved his background as a student and his athleticism They came in and swooped him up.”

Having cemented his future, Johnson went out and earned all-county honors in basketball, then tore up pitching and blistered tracks in the spring.

While track put him in the spotlight, and football is taking Johnson to the next chapter in his life, basketball left some of the best memories of this past year.

“It was a lot deeper than just basketball,” Johnson said. “I was out there playing for my brothers. We were a close group, an extended family. I’ll cherish these memories the rest of my life.”