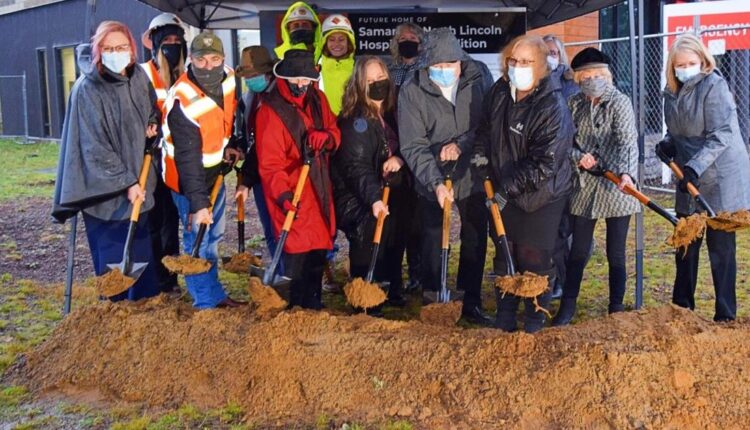 It was a cool, rainy day, but that didn’t dampen the excitement when Samaritan North Lincoln Hospital broke ground on Monday with a 2,500-square-foot MRI add-on.

“Our replacement hospital opened in February 2020 and was designed for future expansion as needed,” said hospital CEO Lesley Ogden, MD. “Shortly after our beautiful new facility opened, it became clear that we really needed to update our MRI so we could continue to provide world-class diagnostic and treatment imaging services to our community. Today I am pleased to announce that almost all the necessary funds have been made available and that we are ready to continue this important project. “

The project cost is $ 4.3 million. This includes approximately $ 1 million to purchase the Magnetom Altea open-bore KMAT MRI system from Siemens and $ 3.3 million to design / build Gerding Builders, LLC. Construction begins in January and will be completed by early summer 2022.

The new MRI will be conveniently located and connected to the north side of the hospital near the emergency room. The extension fits seamlessly into the interior and exterior design and includes separate toilets for all patients and visitors.

This expansion has another advantage: the heat generated by the MRI magnet can be captured in the hospital’s cold water system and converted into heat or cold, thereby reducing the hospital’s energy consumption.

Project contributions include two gifts totaling $ 1.33 million from the tax-funded North Lincoln Health District, a $ 250,000 grant from the MJ Murdock Charitable Trust, and additional generous donations and pledges from community members and Samaritan workers from a total of nearly $ 1.73 million. The fundraising was led by the North Lincoln Hospital Foundation.

Ogden noted that the total cost was estimated at about $ 2 million when project planning began, but has doubled to $ 4 million due to inflationary construction costs.

On an average day, Samaritan North Lincoln Hospital performs six outpatient MRI scans and two inpatient / emergency MRI scans. MRI is a medical imaging technique that uses a magnetic field and computer-generated radio waves to create detailed images of the organs and tissues in the body.

MRI services have been offered at the SNLH for many years. GE’s current MRI equipment has reached the end of its life and is located in an annex on campus, away from the new hospital.

For information about the MRI project and how you can contribute to it, please contact the North Lincoln Hospital Foundation at [email protected]

Foothill Drive is frustrating for commuters. Here’s how UDOT plans to fix that